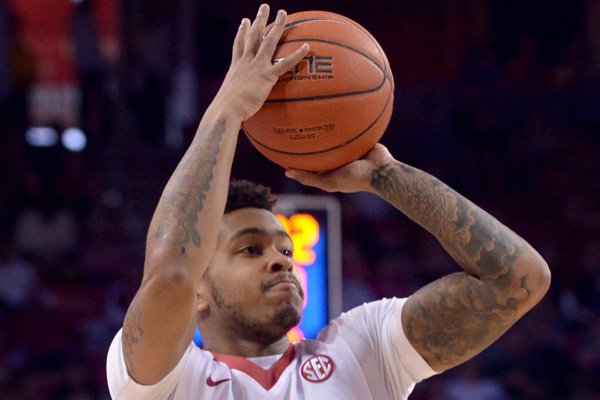 The Razorbacks made 16 of their 24 three-point attempts in an 82-68 win over Mississippi State. At 66.7 percent, it’s tied for the best performance in an SEC game in school history.

With such a large volume of threes – it was also one shy of tying the UA record for most in an SEC game – Arkansas scored them in a variety of ways.

Here’s a look at how each one developed:

(1) The first three-pointer of the game came after Arkansas forced the Bulldogs into an airball late in the shot clock. Anthlon Bell grabbed the rebound and passed to Jabril Durham, who dribbled up the court. He passed it back to Bell after crossing half court and Bell pulled up for an NBA-range three.

It gave Arkansas a 6-2 lead with two and a half minutes into the game and sparked a stretch in which its next six field goals were three-pointers.

(2) Mississippi State took a one-point lead, but it didn’t last long as Durham took the inbounds pass and found Dusty Hannahs on the wing for the Razorbacks’ second transition three. The shot gave them a 9-7 lead with 16:16 left in the half.

(3) Hannahs missed deep ball about a minute later, but got another chance because the Bulldogs couldn’t secure the rebound and it went out of bounds. This time, Arkansas set up a play and worked the ball around the outside before Bell passed it inside to Keaton Miles.

The Bulldogs’ zone collapsed in on Miles and he found Hannahs, who had drifted to the left wing, for a deep three-pointer that gave Arkansas a 12-7 lead with 14:53 left in the half.

(4) Arkansas went with a similar concept on its next possession. Durham, Miles and Bell worked the ball around before Bell passed it inside to Moses Kingsley. The big man took a dribble and, as the defense collapsed on him, he passed it back out to Durham at the top of the key.

Coming into the game, Durham was shooting only 20.8 percent from three-point range, but he caught Kingsley’s pass and rattled in a three from the tip of the Hog tail on the court, giving Arkansas a 15-9 lead at the 14:21 mark.

(5) Out of a timeout, the Razorbacks again began to work the ball around before passing to Trey Thompson on the block. Thompson kicked it back out to Durham, but instead of shooting, he passed it to Jimmy Whitt in the left corner.

The freshman dribbled toward Durham before passing it back. Durham used a screen by Thompson at the top of the key to drive just past the free throw line. With all five Mississippi State defenders in the paint, Bell was left alone on the right wing. Durham hit him and Bell gave the Razorbacks an 18-9 lead with 13:27 left in the half.

(6) In the midst of a two-minute scoring drought, Thompson rebounded a missed free throw by the Bulldogs and got the ball to his ball-handlers. On the other side of the court, Manny Watkins set up a play before starting to move the ball around the outside like Arkansas had before.

When Watkins gave up the ball, he cut to the high post and began moving along the free throw line. Hannahs ends up with it on the left wing and feeds Watkins on the left elbow. He drew two defenders, leaving Beard – who had drifted from the top of the key to the right wing – open for three.

At this point, 21 of Arkansas’ 24 points had come from beyond the arc and the Razorbacks led by seven with 11 minutes to go in the first half.

(7) Mississippi State regained its lead five minutes later and had a chance to extend it, but Durham stole an inbounds pass, tight roped the sideline and drove all the way to the block. He came to a jump stop and fired a pass out to Bell, who was trailing.

Only three Bulldogs were back on defense and Bell knocked it down to give Arkansas a 29-27 lead with five and a half minutes left until halftime. Mississippi State wouldn’t lead again.

(8) On the following play, Mississippi State beat Arkansas back down the court. However, it missed a game-tying layup and the Razorbacks capitalized.

Kingsley pulled down the rebound and passed to Watkins, who pushed the ball up the court. When he got to the right wing, he made a short pass to Hannahs. The sharp-shooter made the NBA-range shot right in front of Mississippi State coach Ben Howland, who furiously called a timeout.

(9) The Razorbacks’ first three-pointer of the second half was much like their seventh of the game, as it was the result of a steal by Durham. He forced Gavin Ware into a bad pass and Hannahs came up with the ball.

Hannahs dribbled it up the court before passing to Durham on the left wing. Just as he caught the ball, Bell flashed open in the corner and Durham hit him for a wide open three-pointer. It gave Arkansas a commanding 48-34 lead with 17:22 left in the game.

(10) Five minutes later, Thompson blocked a shot and threw the ball out to Watkins, who brought the ball up the court. Arkansas’ guards passed back and forth at the top of the key and the right wing before Hannahs got lost in the left corner.

Beard assisted on the three that gave the Razorbacks a 53-42 lead.

(11) With Mississippi State trying to mount a comeback, Bell came down with a defensive rebound and began pushing the ball up the court. He passed to Durham, who found Hannahs on the right wing for a three-pointer in transition.

(12) The Bulldogs wouldn’t go away and cut the deficit to three, causing Arkansas to call a timeout. The Razorbacks went back to moving the ball around the arc, but nothing opened up.

Instead, Hannahs had the ball at the top of the key with the shot clock winding down. He took a few dribbles and pulled up from the Hog snout with a pair of defenders in his face and three seconds on the shot clock.

It was the only three-pointer of the game that wasn’t of the catch-and-shoot variety and gave the Razorbacks a 65-59 lead with just under five minutes left.

(13) Still, Mississippi State responded with a basket. On the other end, Durham went to work. He drove the middle of the lane and, as the defense collapsed on him, he kicked the ball out to Bell on the right wing for the three.

(14) Sometimes when shots are falling, it doesn’t matter where you shoot. The Razorbacks’ 14th three-pointer was a prime example of that statement.

Despite being four or five feet behind the arc, he shot the ball and it banked in off the glass. In the postgame, Hannahs said he called bank in his head. Regardless, it was the dagger, as it pushed Arkansas’ lead to double digits for good.

(15) On the following possession, Miles and Kingsley blocked back-to-back shots by Ware before Bell came away with the ball and passed to Durham.

Durham set up a play and passed to Miles in the high post. Miles dribbled right, then passed back out to Durham, who had drifted to the left wing. He knocked down the long ball, giving him multiple three-pointers in a game for the first time this season.

(16) Appropriately, Arkansas’ final three-pointer came in transition, as Durham assisted on a three by Hannahs on the right wing. It gave the Razorbacks’ their biggest lead of the game – 17 points – with 2:21 left.

-Only one of Arkansas’ 16 three-pointers wasn’t assisted. Not surprisingly, Durham – who had 12 total assists – assisted on nine of them. Watkins and Miles each had two, while Beard and Kingsley had one each.

-Seven of the Razorbacks’ three-pointers came in transition: four by Hannahs and three by Bell. Durham assisted on six of the transition threes, while Watkins assisted on one.

-Arkansas struggled inside the three-point line, shooting just 37.2 percent on two-pointers, but the inside game was key to its outside success. When the Razorbacks worked the ball into the paint, Mississippi State's defenders collapsed in and couldn't get back out on the shooters.