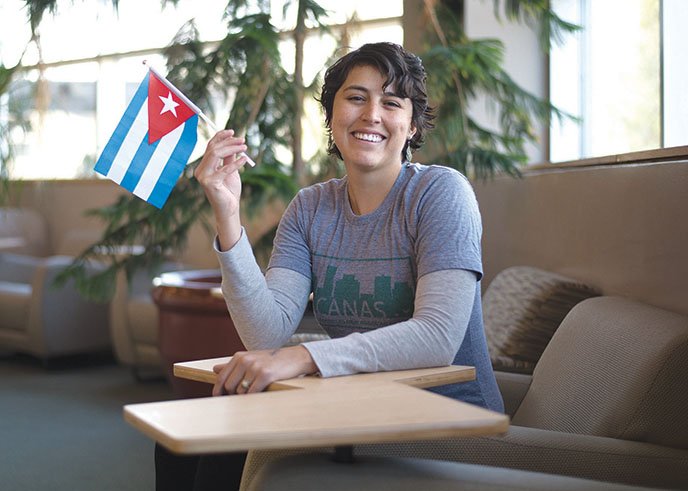 Sandra Leyva holds a Cuban flag as she sits in the Faulkner County Library in Conway. She spent eight days in Cuba in November, touring farms and attending the fifth annual AgroEcology Conference. Leyva is founder of The Locals, a nonprofit organization whose mission includes promoting the local-food movement and teaching people to grow food sustainably.

CONWAY — Sandra Leyva of Conway went to Cuba and said she came home even more passionate about promoting the local-food movement.

Leyva, executive director of The Locals, spent eight days at the fifth annual AgroEcology Conference, touring farms and talking to growers, representatives of cooperatives and schoolchildren.

Leyva said she found out that the Central Arkansas New Agrarian Society, a Little Rock-based group, was sending a delegation to the November conference in Cuba.

“I was like, ‘Sign me up,’” she said, clapping her hands once. Although she is not a member of the group, “we are colleagues

in the local-food movement,” Leyva said.

Five Arkansans went to Cuba, the second-largest delegation from the United States, second only to Vermont. “We were proud of that,” she said.

Cuba is advanced in growing sustainable food, she said, and has farming cooperatives. She said her goal was to learn more about the structure of those organizations and how they work.

The National Association of Small Producers in Cuba sponsored the conference.

It was not the first time that Leyva, who has dual Mexican and American citizenship, had been to Cuba. She went in 2008 to participate in relief efforts after the country had two hurricanes, and she said it was hit by another one while she was there volunteering.

“I would never say this to a Cuban person, but the embargo was the best thing that happened for the agroecological movement in Cuba because it almost forced Cuba to rely on natural resources and to be conscious of taking care of those resources,” she said. Cubans didn’t have the machinery and chemicals that the United States uses.

The impact of the embargo being lifted wasn’t apparent, she said.

“The truth is it hasn’t become something that’s tangible for everyday life and everyday people,” she said. “It’s up there in the bureaucratic government,” she said, holding her hand above her head.

Leyva said the difference she saw in Cuba between 2008 and the trip in 2015 was the access to the Internet and to cellphones.

“I almost didn’t see any of that last time, and I saw a lot of that. The Internet is not such a scarce resource. They’ve always disliked the embargo, so the fact that it’s opening up, they’re starting to like.”

“A lot of what I learned and saw was how Cubans are committed to preserving the soil, water, land and air,” she said. “They’re very against GMOs (genetically modified foods) and against any chemicals, … and they’re concerned about their health.

“Food sovereignty is a big priority for Cuba,” she said.” Havana is “almost 100 percent” self-sufficient in growing its own food.

Leyva said the world’s mentality seems to be “that you need industrial agriculture. That’s not the reality — you can prove that by looking at Cuba. They feed themselves in a way that’s healthy for the people and the planet.

“There is so much incentive for people to go back to the land, and that to me was so impressive,” she said, adding that is not the case for American farmers.

The Cuban government passed a law, she said, that “regular citizens” can apply for land to cultivate. If they feed their family from their crops and share with the community, the land is given to them.

“I met several farmers who took advantage of this law,” she said. “Once you prove to them after a couple of years you’ve done well, … you get more land.”

Each farm in Cuba is part of a cooperative, which is an autonomous organization, she said. Each farmer is part of an assembly, which votes on issues such as what capital improvements to make.

“There’s a crisis here, not as many farmers,” she said. “[American farmers] don’t see it as a way to make a living. The farmers I work with believe in the work; they’re passionate about it.”

However, “it sometimes seems like a never-ending struggle,” she said. She compared American farmers to Sisyphus in Greek mythology, who had to repeatedly push a boulder up a hill. “The encouragement to see farming as sustainable living just isn’t here.”

In Cuba, it’s pervasive, she said.

“The thing that’s most surprising is the level of consciousness and awareness,” she said.

Leyva said she was impressed with how early children were taught about growing food.

“Small children gave us presentations about sustainable agriculture,” she said.

She said conference attendees met with children ages 7 to 12 who were part of interest groups in the schools.

“They gave us presentations that just blew my mind how much they knew and understood,” she said, from using worms in gardening to different types of mulch.

Leyva took a 22-hour bus ride from Havana to Guantanamo. She said less than 3 percent of the territory is the U.S. military base, which she saw at a distance.

Leyva said people sometimes think organic food is for an elite group, but “seeds are very cheap.” She suggests starting with one tomato plant and seeing how many pounds of tomatoes are harvested. “People who grow gardens, they always have too much,” she said.

The Urban Farm Project garden at the library has grown “hundreds of pounds of food” that are donated to the St. Peter’s Episcopal Church food pantry in Conway.

Leyva said she came back from Cuba more committed to growing food locally and getting people more interested in sustainable farming.

“This is a global movement, so we’re learning these things, but we’re trying to apply them locally,” she said.

resources, you can do a lot — we know that as a small nonprofit — but only if the government would do more of a campaign to change people’s perspective, to change people’s awareness — why it is important to support the movement toward local food.

“It’s about the culture. It takes a long time to change culture, to change habits, but it’s possible,” she said.