UA newcomer off to high-flying start 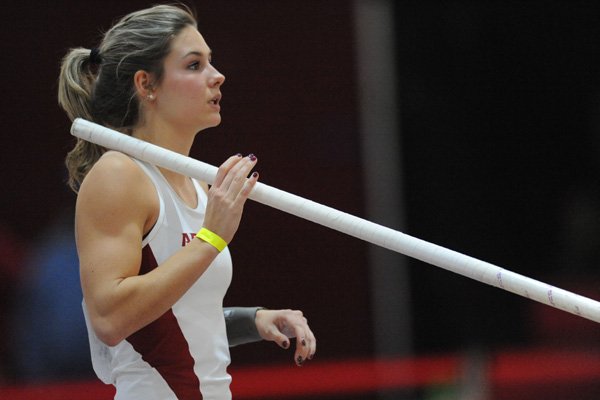 Alexis Weeks of Arkansas competes in the pole vault Friday, Jan. 15, 2016, during the Arkansas Invitational at the Randal Tyson Track Center.

FAYETTEVILLE -- Last year, a clearance of 14 feet, 9 inches was good for second place in the women's pole vault at the NCAA Indoor Track and Field Championships. 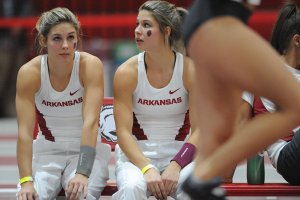 Photo by Andy Shupe
Alexis Weeks (left) and Victoria Weeks of Arkansas speak as they compete in the pole vault Friday, Jan. 15, 2016, during the Arkansas Invitational at the Randal Tyson Track Center.

Weeks cleared 14-9 without a miss at the Randal Tyson Track Center to win the Arkansas Invitational.

"I felt great in practice leading up to this meet," Weeks said. "I was ready to attack that bar.

"It was incredible what Lexi did," Tori Weeks said. "We're competing with each other, but I'm really proud of her."

"It's a great way to start the season. This will give her a lot of confidence, but she's got more left in the tank."

Tori Weeks missed three attempts at 14-1 1/4, which would have been a qualifying mark for the NCAA meet. Her top mark at Cabot was 14-4.

"On that last bar, she got a little tense, a little tight jumping at it, but she'll get it," Compton said. "This was her first college meet, not her last."

"I just had some things kind of go wrong, I think had a few nerves," she said. "There are some things I can go back and work on."

Lexi Weeks credited her increased strength for helping her use a higher grip on bigger poles that led to an improvement by two inches since the end of her high school career.

"I thought I was strong until I came here," she said. "Now I'm a lot stronger. We're usually in the weight room twice a week.

"I want to keep getting stronger, getting faster and going higher."

The Weeks are strictly pole vaulting at Arkansas after both did multiple events at Cabot. Both ran on the 400- and 1,600-meter relays in addition to pole vault. Lexi ran the 100 hurdles and long jump, and Tori ran the 300 hurdles and triple jumped.

Lexi won the Class 7A and Meet of Champions pole vault titles in May and defeated Tori by a single point to win the state high school heptathlon later in the month.

"We did six events every meet. It was crazy," Tori Weeks said. "It's nice to come here and be able to focus just on the pole vault."

The Weeks also are getting in plenty more pole vault training. At Cabot they vaulted about twice a month. At Arkansas, they vault twice a week and do drills specific to the event on other days.

"The training is definitely different, but it hasn't been difficult for us to adjust," Lexi Weeks said. "It's been a really good transition."

Adjusting to Compton's demanding practices also has been an adjustment.

"Coach Compton is tough, but he knows what he's talking about," Lexi Weeks said. "I've already come a long way in such a short time."

At last year's NCAA Indoor meet, Arkansas senior Sandi Morris cleared 15-1 to win, while Duke junior Megan Clark was second at 14-9. Morris is now competing as a professional and continues to live in Fayetteville.

"I thought we might have to go through Sandi withdrawals," Compton said. "But maybe not."

The Weeks twins are training at Arkansas with Morris, Arkansas seniors Ariel Voskamp and Megan Zimlich and sophomore Desiree Freier.

Voskamp, an All-American from Cabot, took third Friday night at 13-5 1/4. Zimlich was fourth at 12-7 1/2. Freier underwent surgery on her left ankle to remove a bone chip and likely will redshirt the indoor season.

"The older girls here are so encouraging," Lexi Weeks said. "They always have our back."

The Weeks visited Oklahoma and Yale in addition to Arkansas, but both said there was never much doubt they'd sign with the Razorbacks. There was no question they'd continue to be teammates in college.

"Coaches would always ask us, 'Would you ever consider going to different schools?' " Lexi Weeks said. "We were like, 'No, there's no way.' We're together all the time.

"We've always been there for each other, and it's just so nice adjusting to college life and having her Tori with me."