Drones fly in gray area: How close is too close?

Private property’s sky ceiling at issue in suit by Andrea Peterson and Matt McFarland The Washington Post | January 17, 2016 at 3:48 a.m. 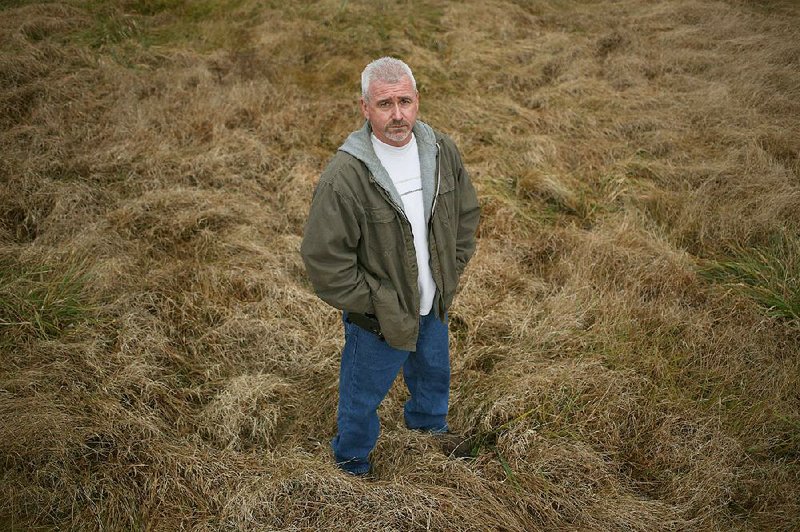 William Merideth stands near his house in Louisville, Ky., where he shot down a drone and set off a legal battle over access to airspace over private property.

William Merideth had just finished grilling dinner for his family when he saw a drone hovering over his land. So he did what he said any Kentuckian would do -- he grabbed his Benelli M1 Super 90 shotgun, took aim and unleashed three rounds of birdshot.

"The only people I've heard anything negative from are liberals that don't want us having guns and people who own drones," said the truck company owner, now a self-described "drone slayer." Downing the quadcopter, which had a camera, was a way to assert his right to privacy and property, he said.

The drone was owned by John Boggs, a hobbyist, who told authorities he was trying to take pictures of the scenery. He argues in a lawsuit filed in U.S. District Court in Louisville that Merideth did not have the right to shoot the craft down because the government controls every inch of airspace in the United States.

For decades, the issue of who controls the nation's air didn't matter much to everyday Americans. Planes, after all, typically must stay hundreds of feet above ground while airborne.

But drones that can take off or land almost anywhere, and the tech companies that dream of using them to deliver goods to America's front porches, are igniting a debate over exactly who owns the air above ordinary homes and lawns.

"There is a gray area in terms of how far your property rights extend," said Jeramie Scott, national security counsel at the Electronic Privacy Information Center. "It's going to need to be addressed sooner rather than later as drones are integrated into the national airspace."

According to the Federal Aviation Administration, every inch above the tip of your grass blades is the government's jurisdiction. "The FAA is responsible for the safety and management of U.S. airspace from the ground up," said an agency spokesman, echoing rules laid out on its website.

But common law long held that landowners' rights went "all the way to Heaven." And today, it's clear that they have some rights.

After all, developers and even cities sometimes sell off rights to the air above their buildings. And if a neighbor has a tree limb hanging over your fence, you generally can chop it off.

The rise of air travel initially sparked questions about where those rights end and flyable space begins. The issue reached the Supreme Court during the 1940s in a case called United States v. Causby after a farmer sued the government over military planes taking off and landing from a nearby airport. The planes, he said, forced him out of the chicken business, and he wanted compensation.

The court gave it to him and said that a property owner owns "at least as much of the space above the ground as he can occupy or use in connection with the land."

But even then, the justices didn't define a precise aerial boundary for landowners, leaving a gray area that Boggs is hoping to clear up for the burgeoning drone market.

"This industry is growing quickly, and it's to some extent being stifled by the legal uncertainty surrounding these issues," said James Mackler, an attorney at Frost Brown Todd, who represents Boggs.

If tech companies are going to deliver goods to the yards of customers, there will need to be clarity on exactly where a drone can fly. Could a drone delivering a package to your neighbor fly over your yard at 50 feet? Or would it need to descend vertically from hundreds of feet in the air to avoid trespassing in your airspace?

Boggs is asking the court to rule that he's entitled to $1,500 to cover the damage to the drone. But more important, he wants a judge to decide whether his drone was trespassing over Merideth's property or whether it was flying within the jurisdiction of the federal government.

A complicating factor is that Boggs and Merideth tell different stories about the day in question. Boggs' suit says the drone was approximately 200 feet above ground, a claim he has previously said was backed up by images captured by the craft.

But Merideth says it was much closer to his home. And when a local judge dismissed criminal charges against Merideth in October, she relied on multiple eyewitnesses who said the drone was flying below the trees.

In 2012, Congress put the FAA in charge of integrating drones into America's skies. The FAA is still finalizing these rules, which are expected to be wrapped up by June. Its proposed rules have little to say about property rights, though they recommend that commercial drones cannot be operated over a person not directly involved in the operation. Crafts flown by hobbyists such as Boggs are also not addressed.

Some argue that the agency has the legal authority to address the privacy issues raised by drones. But the agency "does not consider privacy to be their role or expertise," said Ryan Calo, an assistant professor of law at the University of Washington.

The FAA says it is part of a White House-ordered effort to develop best practices on drone privacy with other agencies, think tanks and companies. But these talks will not produce hard and fast rules.

For now, homeowners mostly have to depend on local laws to fend of drones. In some cases, homeowners could file civil cases against the pilots of low-flying drones, Calo said. They may also be able to persuade local law enforcement to file charges against the operators under existing trespass, nuisance or "peeping Tom" laws.

While the federal government has moved slowly to write drone rules, 32 states have enacted their own laws or resolutions regarding the crafts, according to the National Conference of State Legislatures. But the specifics vary. And some states left it to local authorities to judge when drones are trespassing.

Merideth says the day that Boggs' drone, a DJI Phantom with a camera, flew by was the third time in 18 months he had spotted that kind of craft over his neighborhood. He had called the police on previous occasions, he said, but gotten no help.

By the time Boggs' drone flew over his land, hovering after multiple passes, according to Merideth, he was fed up.

"In my mind it wouldn't have been any different had he been standing in my backyard with a video camera," Merideth said.

Print Headline: Drones fly in gray area: How close is too close?