Thousands at Capitol rally against abortion 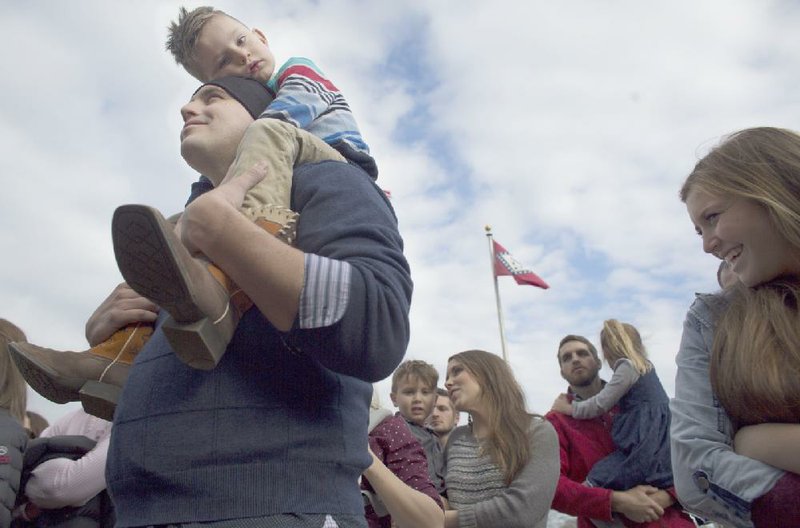 Mark Dominguez (left) listens to speakers during the 2016 March for Life rally at the state Capitol on Sunday. Dominguez went to the rally with his son Khai, 5, and with other relatives and friends in support of anti-abortion activists.

Several thousand people gathered on the steps of the Arkansas Capitol on Sunday to celebrate a year of achievement for abortion opponents in Arkansas and encourage more anti-abortion legislation. 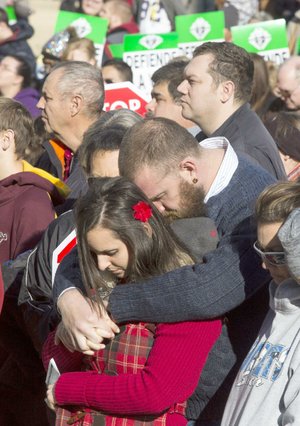 Photo by Melissa Gerrits
Jeffrey Crowder hugs his wife, Kassle, during a prayer Sunday at the 2016 March for Life rally at the state Capitol in Little Rock.

Gov. Asa Hutchinson, a Republican, and the Republican-controlled Arkansas Legislature enacted more anti-abortion legislation in 2015 than any other state. Six laws were passed in the 2015 legislative session.

The new laws require women seeking an abortion to wait two days between an in-person meeting with a doctor and the procedure; ban the use of telemedicine for abortions; and increase regulations on the disposal of fetal tissue. One of the laws, which limits the administration of the abortion pill, did not take effect Jan. 1 because it has been challenged in federal court by Planned Parenthood of the Heartland.

Arkansas Right to Life sponsored Sunday's March for Life rally, and Executive Director Rose Mimms said she was happy with the event.

"We're very pleased with the progress made on the national and state level," she said after the rally. Mimms said abortion opponents have more work to do, including overturning Roe v. Wade -- the 1973 U.S. Supreme Court decision legalizing abortion. But she said there was "cause for celebration."

Hutchinson and four members of the state's congressional delegation addressed the crowd from atop the Capitol stairs. U.S. Sens. Tom Cotton and John Boozman and U.S. Reps. French Hill and Bruce Westerman, all Republicans, praised the state Legislature's work in 2015.

Hutchinson urged those in attendance to continue marching.

"Abortions have decreased and adoptions have gone up, but there are still lives to be saved," he said.

"Will we keep marching until this blight on America is resolved?" Hutchinson asked the crowd, which answered with a collective "yes."

There were more than 4,000 legal abortions in Arkansas in 2014, according to the Arkansas Department of Health. The number of abortions in 2015 has not yet been posted on the department's website.

Karen Musick, a rally chairman for the Arkansas Coalition for Reproductive Justice -- a group that advocates for abortion rights -- attended Sunday's rally, but left after she said another woman accosted her. Musick said the speeches at the event troubled her.

"The amount of pride they had at additional restrictions we have here in Arkansas was disturbing," said Musick, who co-founded a group to escort women to abortion clinics. "Those restrictions do nothing more than increase the number of abortions."

Musick and two other abortion-rights supporters did not advertise their presence. She said they went to hear the elected officials speak and to ensure that future abortion-rights rallies would be treated equally.

The Arkansas Coalition for Reproductive Justice will hold its own rally Saturday at 1 p.m. at the state Capitol.