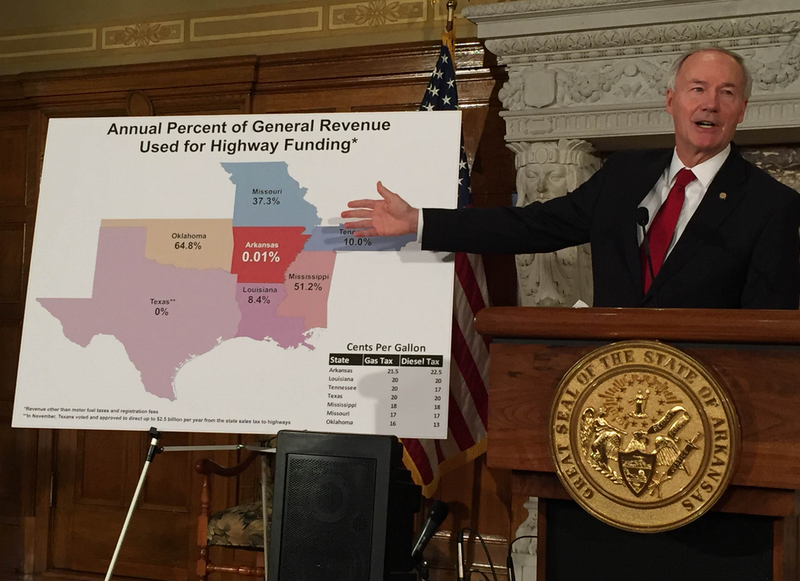 Gov. Asa Hutchinson on Tuesday announced a plan that he said would generate $750 million in highway project funding over a 10-year period without placing an additional tax burden on Arkansans.

The state's investment "means that we are putting on the table $2 billion in federal funds over the same 10 years," he said during a news conference at the state Capitol in Little Rock.

"Everybody wants new highways. They didn't want to, in this economy, have higher taxes in order to pay for those highways," Hutchinson said.

Highway funding would increase by $46.9 million in fiscal year 2017, according to the plan that he is proposing to the state Legislature

Hutchinson said the proposal would also generate up to $25 million in revenue from an existing sales tax on new and used vehicles. The tax amount would remain "exactly the same," he said.

Additional funding would include $4 million in general revenue from diesel tax collection: $2.7 million going toward the state Highway and Transportation Department and the remaining $1.3 utilized by cities and counties.

If revenue falls short of projections, Hutchinson said the state would then look at other options to fulfill the needs of statewide highway needs.

"It is the right thing to do, as illustrated by the needs of other states," Hutchinson said after referencing data on revenue used for highway funding by neighboring states.

After Tuesday's news conference, Scott Bennett, director of the state Highway and Transportation Department, told reporters that the plan is a short-term solution that is a "critical first step."

"Overall, it means that we will be able to continue the level of improvements that we've experienced over the last several years," Bennett said, adding that highway improvements will not get "significantly better without a significant additional investment."

Hutchinson has called for a special session for the Legislature to consider his highway funding proposal as well as changes to the state's Medicaid program. Arkansas' Republican governor provided no time frame Tuesday for when that session might occur. 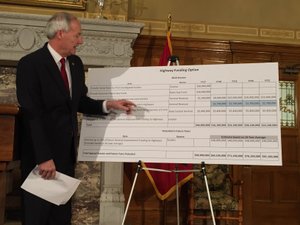