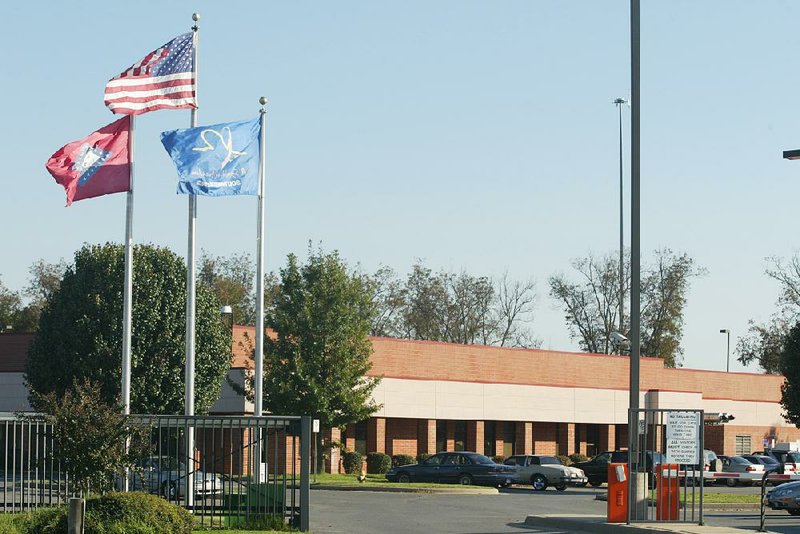 Bill and Hillary Clinton National Airport/Adams Field has found a tenant for the Southwest Airlines Reservation Center, shown here in November 2003. Cantrell Drug will lease the facility on the airport grounds under an agreement approved Tuesday. 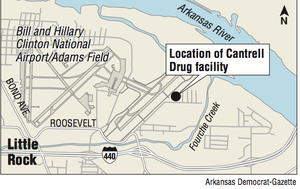 Photo by Arkansas Democrat-Gazette
A map showing the location of Cantrell Drug facility.

The airport will receive $360,000 in annual income under the agreement that the Little Rock Municipal Airport Commission approved Tuesday, but airport officials say the new tenant, Cantrell Drug, also will spend $7.5 million on improvements for the property and hire 125 employees to staff the facility that started out as a reservation center for Southwest Airlines more than 20 years ago.

"This looks like a great fit for everyone," said Virgil Miller Jr., the commission chairman.

Cantrell Drug bills itself as "a multi-faceted specialty pharmaceutical company providing sterile and non-sterile pharmaceutical preparations to meet the needs of patients, physicians, clinics, and health care institutions throughout the United States," according to its website.

Founded in 1952, the privately held company has reached its production limits at its primary location on Cantrell Road and wanted to open production at an additional location, Michael Pierce, the company's president, told the commission at its regular monthly meeting.

"It's not a relocation, it's an addition," he said. "We're real excited about this facility."

The company now employs about 150 people. A company representative confirmed later Tuesday that the 125 additional employees would be added "over time." She was unable to confirm the investment amount nor whether the financing would be obtained under state economic incentive programs.

Under the terms of the lease, Cantrell Drug takes over the building on Feb. 1 and, after reconfiguring the building and adding equipment, the company could begin production within 180 days, Pierce said.

The company will be leasing a 42,800-square-foot building on 14 acres on the east side of the airport at Kellett Road and Fourche Dam Pike, which is outside the airport's perimeter fence.

Given its start-up and renovation expenses, the airport will provide a three-month rental credit beginning Feb. 1. The lease terms will increase 2 percent annually.

Cantrell Drug also is required to provide a $90,000 security deposit, be responsible for all utility costs, maintenance and repair of the building excluding the roof and the building's structural integrity, and pay all taxes assessed on the premises and on the company's operation and personal property.

The company also is required to provide the customary insurance on the property and its contents. The agreement requires a minimum of $1.5 million in capital improvements for the first six months of the lease although airport officials insist the investment will be much greater.

The agreement is contingent on the property being zoned to accommodate Cantrell Drug's operation and on the company obtaining "acceptable financing arrangements," both of which Pierce said he didn't anticipate being a problem.

Stacy Hurst, a member of the commission and former Little Rock city director, said she believed the company's operation to be "very attractive use for the property."

Another commission member, Jim Dailey, said that though the commission preference is to have aviation-related tenants, he said it "ties into the overall concept of economic development in this area" of the city.

Southwest broke ground on the facility, originally priced at $10 million, in 1994 and at the time anticipated employing 900 people with a $15 million annual payroll. The airline closed it and other reservation centers in 2004, citing the increase in airline tickets purchased online. About 700 people worked at the reservation center at the time its closure was announced, according to news reports.

Less than a year after the reservation center closed, the commission approved an arrangement allowing Southwest to lease the building to Arkansas Blue Cross and Blue Shield. The insurer was forecast to employ 500 full-time and 200 part-time employees under a contract it had with the Centers for Medicare and Medicaid Services, a division of the U.S. Department of Health and Human Services.

But in November 2014, Blue Cross notified Southwest that it would relocate its operation and consolidating it with other offices, airport staff said. After Southwest told the airport that it would not execute a renewal option, Blue Cross officials contacted the airport and asked to remain in the building for an additional three months beginning Jan. 1, 2015, "while build-out of the space they are relocating to is completed," according to an airport memo.

Ron Mathieu, the airport's executive director, recused himself from the portion of Tuesday's meeting covering the Cantrell Drug lease.

She said Mathieu contacted her in December, which she said staff members are required to do under commission policies anytime "there might be a conflict between the staff member and any item before the commission" and noted that Catlett Law Firm of Little Rock, which represents Cantrell Drug, also was "his wife's law firm."

Catlett has represented Yasmine Mathieu in "past business matters," said Shane Carter, a spokesman for the airport.

Under the policy, Ron Mathieu "asked me to make a recommendation and recused himself from the entire process," Witherspoon said. "I determined that there was no technical conflict but that his actions were prudent and appropriate."

"I requested that Mr. Malinowski present the item to the full commission today and answer any questions you may have about Mr. Mathieu's involvement."