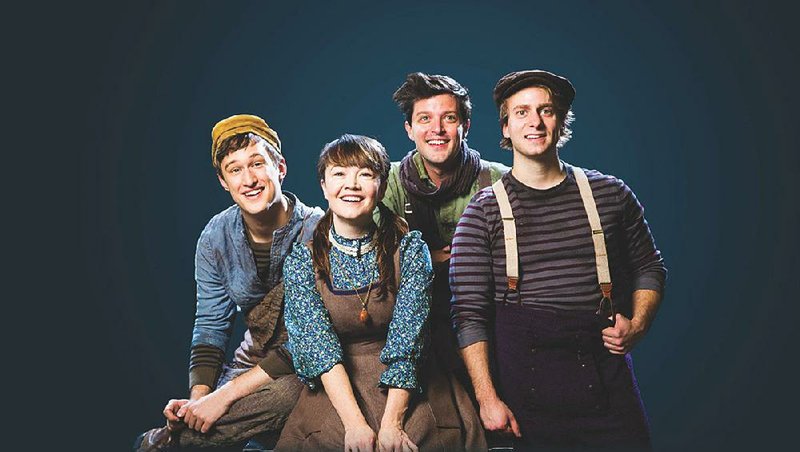 Peter and the Starcatcher is to Peter Pan what Wicked is to The Wizard of Oz.

Peter and the Starcatcher

Of course, mention must be made of J.M. Barrie, who wrote Peter Pan in 1904, about a boy who would never grow up. Peter and the Starcatcher takes on the challenge of explaining how a miserable orphan would become that boy. Along the way imagination takes over and pirates and heroes match wits.

Arkansas Repertory Theatre will present the play as part of a co-production with Fayetteville's TheatreSquared, where the play ran from Dec. 3 to Jan. 3 at the Studio Theatre at Walton Arts Center's Nadine Baum Studios.

Mark Shanahan is the director of the co-production, and he notes that it has been a joy to work on a play that emphasizes the power and scope of imagination.

"No matter how old you get, it's always a thrill to put on a pirate costume and to snarl, appropriately, the members of the cast have assured me," Shanahan says with a laugh. "It's been so terrific to finish up a good run in Fayetteville, and then load up all the costumes, props and set. And the cast, too, of course, they're all here, after a couple of days off. We unloaded the trucks and are ready to keep the show going."

Shanahan says that with a host of pirates, mermaids, crocodiles and other surprises, the play and its music tell the story of the origin of Peter Pan through the use of some new characters, with everything becoming clear at show's end.

"Peter Pan is just one of those stories that have stuck with me," Pacek says. "It's just part of our upbringing, and my wish, if I was a superhero, would be as a human being getting to fly. And the part about never growing up -- I think I suffer from a bit of that.

"The awesome part of this show is that it is such a great celebration of the imagination. For instance, the actors have to be innovative and resourceful, since we get to variously become the wind, the water, a tree, and so on and make these things come to life."

With Pacek as Peter, the hero of the show, Kennedy, as Black Stache, the villain, has some thoughts on his role.

"I've always been attracted to the 'baddies,'" Kennedy says. "A lot of my favorite roles have that in their wheelhouse -- a rougher texture. And this show is really something that draws in young people, thanks to the music, dance, fights, magic and flying. It's very sophisticated make-believe.

Shanahan is doing his first production in Arkansas, but he's in the unique position of already being familiar with Little Rock.

"I wrote a play, The Dingdong, which we 'workshopped' at the Arkansas New Play Festival in 2015," he says, "and it will open off-Broadway at the Pearl Theatre in April."

• At noon today, the Clinton School of Public Service Distinguished Speaker Series will present the Rep's Producing Artistic Director Robert Hupp, as he moderates a panel discussion of the play with members of the cast and the creative team. To reserve seats, email publicprograms@clintonschool.uasys.edu or call (501) 683-5239.

• Friday, the play's official opening night, there will be a post-show reception with the cast, featuring complimentary champagne and light hors d'oeuvres from RSVP Catering.

• On Sunday, "Pay Your Age Night," sponsored by Little Rock Soiree magazine, will permit those between ages 22 and 40 to pay the equivalent of their age for a ticket. There are 100 such tickets available and only four tickets per household will be sold, with proof of age for each person in a party required when picking up the tickets. There will be a complimentary wine tasting provided by Colonial Wine and Spirits.

• At 6:30 p.m. Jan. 29, there will be pre-show music by local singer-songwriter HeatherSmith. Tickets are not required for her performance.

• The 7 p.m. Feb. 3 performance will be sign-interpreted by Raphael James of the University of Arkansas at Little Rock. Deaf patrons are encouraged to contact the Rep box office to reserve seating in a special section.

• On Feb. 13, following the evening performance, there will be an after-party, featuring drinks and appearances by cast members, in Foster's. Tickets are not required for the party.