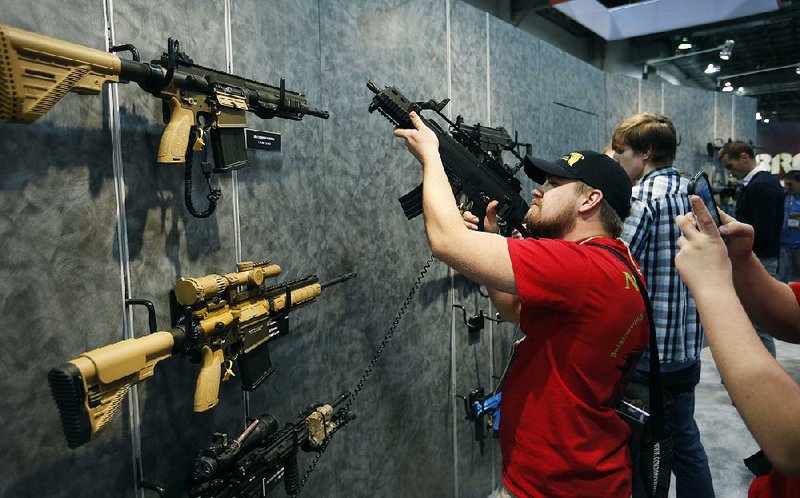 Nolan Hammer looks at a rifle at the Shooting, Hunting and Outdoor Tradeshow in Las Vegas on Tuesday. At the event, Remington Outdoor Co. announced that it will add more than 80 jobs at its Lonoke plant and SIG Sauer will open a Jacksonville manufacturing operation that will employ 50. (AP / JOHN LOCHER )

Remington Outdoor Co. will add more than 80 jobs at its Lonoke plant and gun-maker SIG Sauer is opening a Jacksonville ammunition manufacturing operation that will employ 50, the two companies said in separate announcements at the Shooting, Hunting and Outdoor Trade Show in Las Vegas on Thursday.

Gov. Asa Hutchinson is attending the show this year in a first for an Arkansas governor.

"We have a gun-friendly state that loves the industry, and we love Remington," Hutchinson said from the show on a video announcement on social media.

Hutchinson said Remington was investing about $12 million in the expansion. He said his administration wants to establish Arkansas as a premier location for investment and expansion for the firearms industry.

Hutchinson formerly served as director of the Drug Enforcement Administration and as undersecretary of the U.S. Department of Homeland Security. He also led a National Rifle Association task force that recommended more training for school resource officers and arming selected school personnel after the 2012 mass shooting at Sandy Hook Elementary in Newtown, Conn.

Hutchison met with Remington in February 2015, and SIG Sauer was one of six companies the governor contacted on his first day in office, according to a news release.

Remington plans to expand its plant in Lonoke and will create 84 new jobs. Remington did not reveal how much it would invest in the project.

Remington received $2.5 million from the Governor's Quick Action Closing Fund; eight years in annual cash rebates equal to 3.9 percent of payroll for newly created positions; and a sales- and use-tax credit for businesses that invest $5 million or more in a single location for new construction, expansion or modernization.

SIG Sauer will occupy an existing structure in Jacksonville and intends to invest several million dollars in its Arkansas operation. The company makes pistols, rifles, ammunition, optics, silencers, air guns and accessories. Incentives SIG Sauer received include $800,000 from the Governor's Quick Action Closing Fund; a tax credit based on new-job payroll; and sales tax refunds on building materials some machinery and equipment.

Based in Newington, N.H., SIG Sauer is part of a worldwide group of firearm-makers including J.P. Sauer and Sohn and Blaser, Gmbh. in Germany and Swiss Arms AG in Switzerland. It employs more than 900.

The Shooting, Hunting and Outdoor Trade Show, commonly called SHOT Show, is an annual, industry-only event. It began Tuesday and runs through today.

It's sponsored by the National Shooting Sports Foundation, a trade association for the firearms, ammunition, shooting and hunting industry. This is the 38th year for the show, and it's expected to have more than 1,600 exhibitors. Attendance last year was nearly 64,000.

Gun sales have seesawed in recent years but have boomed over the past few months after a November terrorist attack in Paris killed 130 people and a mass shooting in San Bernardino, Calif., killed 14 in early December.

For 2015, the adjusted number of National Instant Criminal Background Checks collected by the National Shooting Sports Foundation was 14.24 million, up 8.7 percent from 13.1 million for 2014. The checks are commonly considered precursors to firearms sales. In 2013, there were 14.8 million checks during the year, the most checks to date for a single year.

Gun sales surged in 2013 after gun owners grew concerned about more firearms restrictions after several mass shootings, but sales cooled in 2014, when gun-makers ramped up production and eventual oversupply saturated the market.

According to an Arkansas Economic Development Commission recruitment handout, Forbes magazine ranks Arkansas as America's third most gun-friendly state, with 42 registered firearms for every 1,000 residents. It notes that Arkansas has the second-highest percentage of manufacturing employment in the South and the fourth lowest cost of doing business, according to CNBC.

The Firearms and Ammunition Industry Economic Impact Report 2014, produced by the National Shooting Sports Foundation, counted 2,650 jobs in Arkansas directly attributed to the firearms industry in 2014, with total wages of $145 million, up from 2,398 jobs in 2013.

Fort Smith is home Umarex USA and Walther Arms, both under the umbrella of Arnsberg, Germany-based PW Group. Umarex moved to Fort Smith in 2010, and Walther Arms opened shop in 2012. The companies share space in the Chaffee Crossing development and employ about 90 workers between them.

Earlier in the year, Walther Arms released the PPQ .45, its first pistol chambered in Automatic Colt Pistol ammuntion. Right before SHOT Show, Walther debuted the PPS M2, a smaller pistol designed for concealed carry but with additions that many American shooters prefer, such as a button magazine release. At the show itself, Walther unveiled the PPQ Q5 Match Pistol, with upgrades for competition shooting and an optics ready slide.

"These pistols are answers to our customers' demands," said Everett Deger, director of marketing for Walther Arms.

Walther's sister-company, air gun maker Umarex, also is making a showing at SHOT this year, with 18 new air rifles and pistols and other products including targets.

Justin "J.B." Biddle, director of marketing for Umarex, said a contingent from the German parent company also will be attending the show.

"We have an exciting year ahead of us," Biddle said.

In late 2013, Thermold Magazines moved its headquarters to Fort Smith from North Carolina.

Sylvan Bednar, president of Thermold, said attending SHOT Show gives the company a chance to touch base with customers and court new ones. He said the company doubled gross sales from 2014 to 2015 and was projecting sales growth of up to 30 percent in 2016. He said international sales and continued sales of magazines to original equipment manufacturers were expected to be key growth areas in 2016.

Mark Stone, CEO and owner of Nighthawk Custom, said his booth has been busy this year and the demand is clearly up across the board.

At this year's show, Nighthawk is presenting its collaboration with Utah-based Browning Arms Co. The pistol is a classic Browning Hi-Power chambered in 9mm and complete with a slew of Nighthawk custom upgrades including parts and improvements made by a gunsmith.

Nighthawk touts a philosophy the company calls "one gun, one gunsmith." A single gunsmith is responsible for assembling the weapon, and when satisfied with the results, the gunsmith signs the pistol with an individualized stamp. This will hold true with Nighthawk's version of the Browning Hi-Power, Stone said.

"We took this classic pistol and made it better, and it's been a huge hit here," he said.