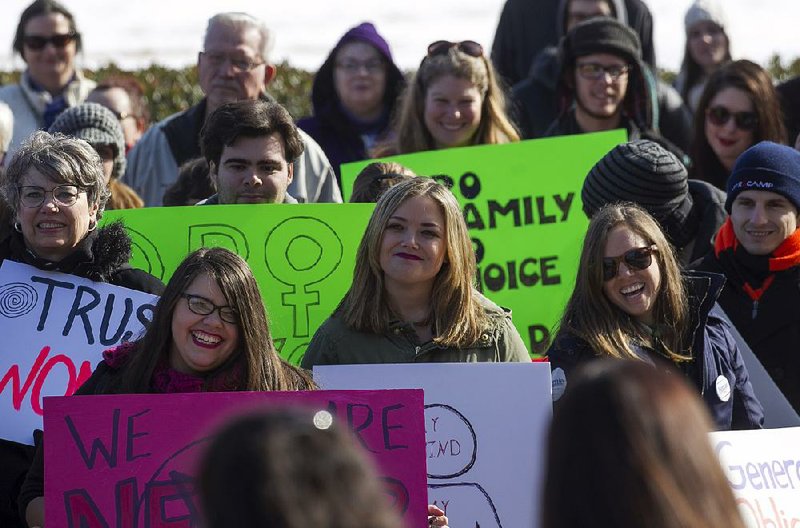 Rally for Reproductive Justice participants listen Saturday at the state Capitol in Little Rock as speakers talk about reproductive health issues such as sex education and abortion.

About 200 people held hands, displayed signs and chanted on the Arkansas Capitol steps Saturday to show their support for reproductive health and abortion rights. 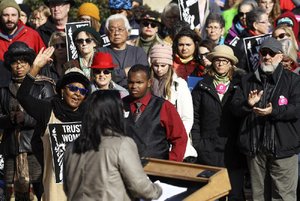 Photo by Benjamin Krain
Participants in the Rally for Reproductive Justice listen to speaker Camille Richoux on Saturday at the state Capitol in Little Rock.

"It grieves me, young people, that we are still talking today about ... what a woman can and cannot do with her body," state Sen. Joyce Elliott, D-Little Rock, told the crowd.

The rally was held six days after the Arkansas March for Life rally, also on the Capitol steps.

Last week was the 43rd anniversary of the Roe v. Wade U.S. Supreme Court decision that legalized abortion. Also last week, the Supreme Court decided not to hear Arkansas' appeal of a judge's decision to strike down a 2013 law banning abortions after 12 weeks of pregnancy if a fetal heartbeat can be detected.

The Arkansas Legislature has passed several other laws restricting abortions in the past two regular sessions, and lawmakers and lobbyists have said they intend to push more laws in 2017.

Stephanie Ho, a doctor in Fort Smith who also works part time as a physician at Planned Parenthood in Fayetteville, said laws requiring more consultations with patients seeking abortions delay the wishes of women who have already thought long and hard about getting the procedure.

She added that a law that took effect last year requiring her to tell women that drug-induced abortions can be "reversed" midprocedure has "required me to lie to my patients."

Jerry Cox, executive director of the conservative Family Council in Little Rock, said in an interview last week that abortions are decreasing among Arkansans because of a more conservative attitude in the state.

"I think what the public has slowly come to understand over the last 30 years is that abortion is so much more than decision by a woman regarding doing something for her body," Cox said. "People have begun to understand that unborn is a distinct human being at the moment of conception."

There were more than 4,000 legal abortions in Arkansas in 2014, according to the Arkansas Department of Health. The number of abortions in 2015 has not yet been posted on the department's website.

That is higher than the numbers in 2013 and 2012 but much lower than years before that, according to the department.

When broken down by whether the woman was an Arkansas resident, the 2014 number drops to about 3,100. The number of abortions in the state increased for women who were from elsewhere.