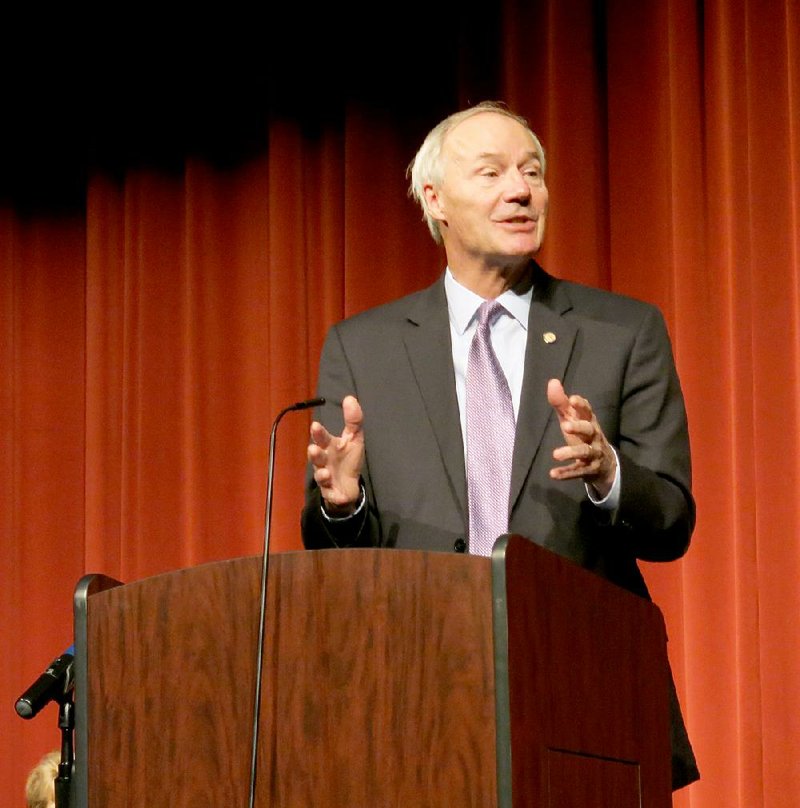 Gov. Asa Hutchinson said he considered a proposal to increase gas taxes to raise more money for highways, and offset the gas-tax increase with a further reduction in individual income taxes, but he decided that "this was not the right time to do either.

"To raise the gas tax now or any tax now and say we are going to have to offset that by a reduction in income taxes in a future session would not be well received by the Legislature or the Arkansas taxpayer," the governor said Thursday.

Rep. Andy Davis, R-Little Rock, said the Republican-controlled Legislature "is just opposed to any tax increase because the feeling is we have enough revenue, but we need to work on being more efficient with the revenue we have."

"And while I think the Highway Department is efficient with what they have, this Legislature hasn't had a chance to look at it and prove that to themselves."

While the Arkansas Trucking Association supported raising the diesel tax, the Joint Budget Committee co-chairman, Rep. Lane Jean, R-Magnolia, said he wouldn't vote for a diesel-tax increase because he's heard from truck drivers who are opposed to raising that tax.

"I know the prices are lower right now, but the logging people and the concrete haulers and gravel haulers in my district are not members of the trucking industry and they are struggling as it is," said Jean. He said he supports the governor's highway funding plan that would rely on part of the general revenue surpluses and reallocate other state funds to the Highway and Transportation Department. The additional state funds would be used to match federal highway dollars.

David Ray, state director for the Arkansas chapter of another group, Americans for Prosperity, said the group applauds "Hutchinson's call to address our state's highway needs by prioritizing existing resources and not asking motorists to pay more at the pump.

"The plan laid out by Gov. Hutchinson [Tuesday] holds the line on motor fuel taxes while beginning to address the issue of General Improvement Funds, which have long needed reform. We are hopeful the Legislature heeds the governor's advice to not raise taxes and will use this opportunity to adopt reforms to bring transparency to how highway 'turnback' funds are used [by local governments]," Ray said in a written statement last week.

During his trip to New York earlier this month, Hutchinson said he ultimately wants to cut the state's top income tax rate to 5 percent.

"It is going to take a while to get there," he said Jan. 11 on CNBC's Squawk Box television show.

The middle-income tax cuts became effective in the 2016 tax year and are projected to reduce general revenue by $102 million in fiscal 2017, which starts July 1.

The Department of Finance and Administration hasn't analyzed how much general revenue would decrease if the top income rate was 5 percent, said Jake Bleed, a spokesman for the finance department.

Hutchinson, who was elected in 2014 to a four-year term as governor, said Thursday that whether he proposes income-tax cuts for the Legislature to consider "all depends on the shape of the economy and how we've absorbed the current tax cut and the amount of our surplus at that time, and so those are too many ifs to make a commitment now to say exactly what we are going to do in 2017."

"It's just premature to determine what is our next step on income tax reduction," he said.

"I maintain my commitment that we need to continue to work on reducing our income tax rates in Arkansas to be more fair and to be more competitive, Hutchinson said. "That's a long-term process and the greatest opportunity to do it is to continue to grow our economy, where we can expand our tax base and then lower the rates. We've just started that process."

If Congress enacts legislation to require retailers to collect sales taxes on online sales, "then I would commit that every new penny of new revenue that would come in as a result of those online transactions would go to reduce the income-tax rate in Arkansas," Hutchinson said.

"I don't know how Congress will address that in the future, but I think the consensus is growing that that is necessary for fairness and, if we did get that done, then that's a good opportunity to reduce the income tax," Hutchinson said. The increased tax revenue from online sales are estimated to be about $100 million a year for Arkansas, he noted.