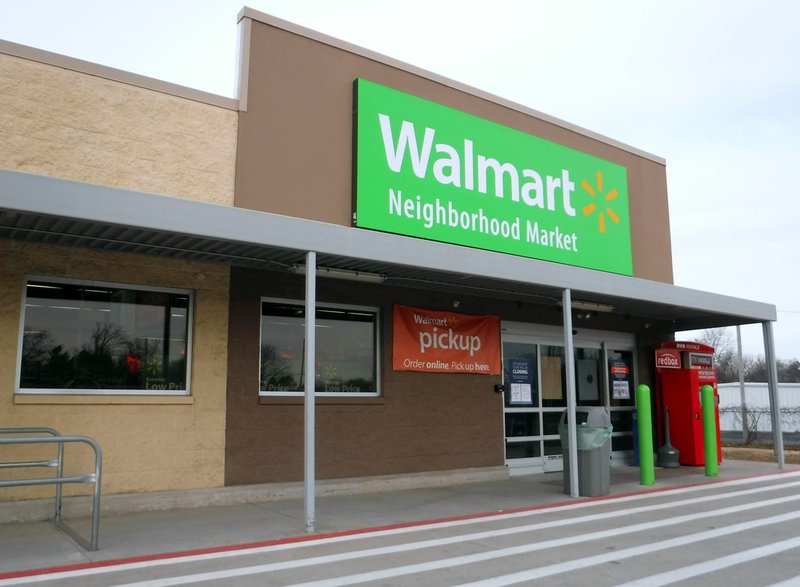 Photo by Randy Moll The Walmart in Gentry had a sign on the door announcing the store would be closing for good on Jan. 28 at 7 p.m. The smaller versions of Walmart will also be closing in Decatur and Gravette by the end of the month.

Wal-Mart's decision to shutter 154 stores across the country means that, starting Friday, folks in Coal Hill will need to drive 15 miles to get to the nearest supermarket and pharmacy.

Come Thursday, residents without cars in a neighborhood near a historically black college outside Birmingham, Ala., will have to cross dangerous roads on foot to get fresh produce and meat. Low-income neighbors of Wichita State University in Kansas, too, will be losing quick access to fresh groceries.

Besides the three new food deserts, another 31 neighborhoods in 15 states will lack any place that sells fresh produce and meat once the last of the Wal-Mart stores slated for closure turns off the lights Feb. 5. However, poverty is not so pervasive in those neighborhoods that they would qualify as food deserts, as defined by the federal government.

The U.S. Department of Agriculture considers a neighborhood a food desert if at least a fifth of residents live in poverty and a third live more than 1 mile from a supermarket in urban areas, or more than 10 miles in rural areas, where residents are more likely to have cars. Nearly 9,000 neighborhoods are considered food deserts by that definition, according to the USDA's most recent review.

A Wal-Mart spokesman said the company is still committed to ending food deserts. It is making donations to food banks in communities where stores are closing, increasing the budgets of stores in neighboring locations and also working with potential buyers of its stores' properties to bring other supermarkets to the affected neighborhoods, said spokesman Brian Nick.

In Coal Hill, just a two-hour drive from Wal-Mart's Bentonville headquarters, the Wal-Mart was the biggest employer in the soybean-country town of more than 1,000. Once it closes, residents will have to drive 15 miles to the nearest supermarket and pharmacy, said Coal Hill Mayor Ronnie Garner.

"It's devastating for the town," Garner said. "It's our only pharmacy, our only grocery store."