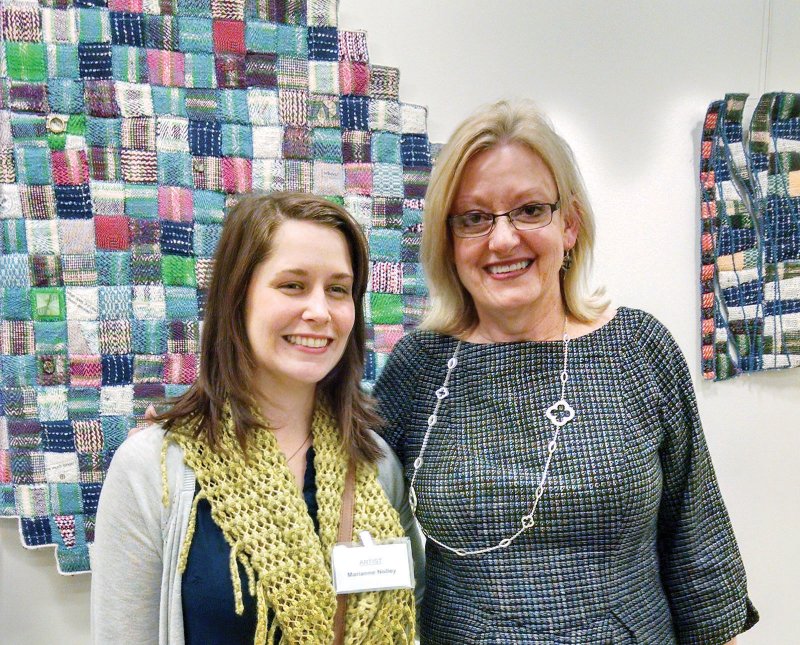 Deborah Kuster of Conway, right, professor of art at the University of Central Arkansas in Conway, poses with former student Marianne Nolley of Little Rock at the opening reception for Form in Fiber: A Nine-Woman Fiber Arts Show at the Argenta Branch of the William F. Laman Library System in North Little Rock. Kuster and Nolley both have works in the show, which will close Feb. 5.

Just ask Deborah Kuster, who teaches a fiber art class each spring semester as well as art education classes during the remainder of the year at the University of Central Arkansas. She is among nine fiber artists whose works are on display in Form in Fiber: A Nine-Woman Fiber Arts Show through Feb. 5 at the Argenta Branch of the William F. Laman Library System in North Little Rock.

Kuster knows most of the other fiber artists in the show, which is curated by Rachel Trusty of Russellville.

“Rachel is a former student of mine, as is Marianne Nolley [of Little Rock],” Kuster said. Trusty has taught art at several area schools, and Nolley now teaches art at Mount St. Mary Academy in Little Rock.

“Amanda, Marianne and I have wanted to exhibit together for several years, and Rachel’s invitation to participate in this show made it happen,” Kuster said.

“Also, several of the other fiber artists have become friends as we have exhibited together,” Kuster said. “The opening reception was a great time of reunion.

“Another reason this show has special meaning for me is because three of the other artists — Barbara Cade of Hot Springs, Jane Hartfield of Fort Smith and Louise Halsey of Little Rock — were in the Arkansas Women to Watch Exhibition 2013 with me.”

The Arkansas Women to Watch Exhibition 2013 was sponsored by the Arkansas Committee of the National Museum of Women in the Arts in Washington, D.C., and had “textile” as its theme. The show featured five Arkansas female artists and traveled throughout the state for a year.

Kuster said she began weaving in the mid-1990s but created her first artwork from cutting, piecing and quilting her hand-woven textiles in 2006.

“This is a time- and labor-intensive process that combines all that I love doing — reflecting, visualizing, designing, assembling, weaving, sewing and embellishing,” Kuster said. “My work is diversely influenced by weaving traditions such as the kente cloth by the Ashanti of West Africa and the Mayan textiles of the Americas, along with later American artists Anni Albers and Faith Ringgold.

“My quilted weavings are my interpretations of the lingual into visual imagery,” she said. “Currently, the majority of my art has been in response to quotes from my grandchildren, with multiple implications for the viewer, such as a metaphor or pun. Each work holds layers of labor, challenge, memory and satisfaction for me.”

Kuster is a professor of art at UCA, where she has been

employed for 13 years. She holds a doctorate in art education from the University of North Texas.

Kuster is the curator of a current exhibit of fiber art in the Baum Gallery of Fine Art at UCA. That exhibit, Finding Shelter: An Exhibition of Contemporary Fiber Art, will

When selecting artists for the Form in Fiber exhibit, Trusty said, she looked “specifically for fiber artists who worked with abstraction or geometric shapes in their work.

“There is a variety of fiber techniques in the show, such as quilting, weaving, felting,

Form in Fiber is free and open to the public.