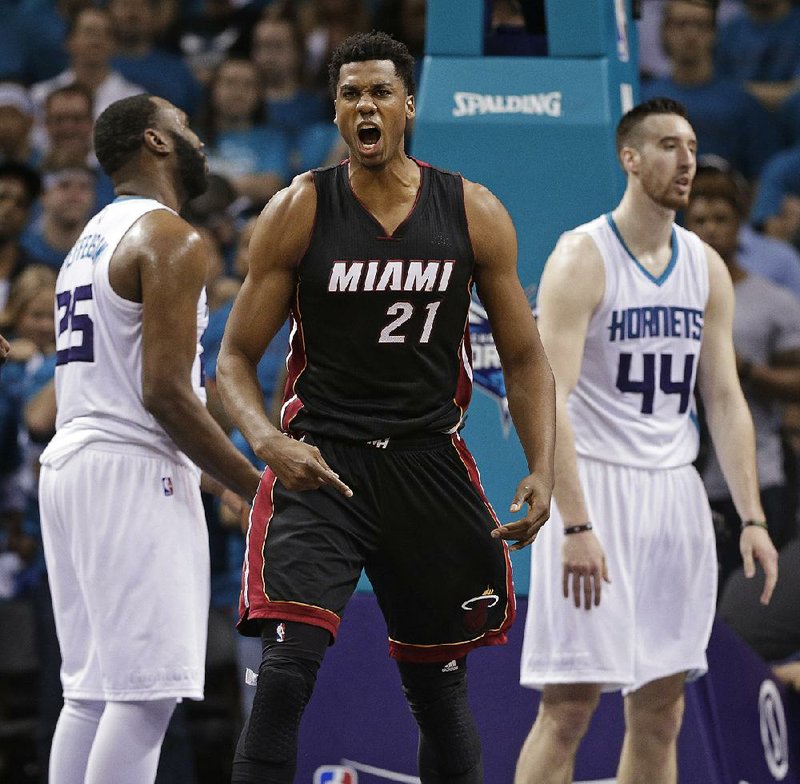 Hassan Whiteside (center) made less than $1 million while playing with the Miami Heat last season. With the NBA’s salary cap expected to leap from $70 million to near $95 million, Whiteside figures to draw around $20 million per season in free agency.

Miami President Pat Riley is a big fan of the symbolic 12:01 a.m. phone call to his team's top targets. San Antonio Coach Gregg Popovich says he would rather be sleeping at that moment. And more than $1 billion in deals will likely be hammered out in the next couple of days alone.

Free agency has returned to the NBA, and today, July 1, is unlike any other.

Sure, there's the annual list of superstars who could take their talents elsewhere -- Kevin Durant will hear sales pitches designed to talk him into leaving Oklahoma City, Dwyane Wade is prepared to leave Miami if he doesn't get a deal to his liking, and it seems LeBron James will make the Cleveland Cavaliers dig even more deeply into their pockets to reward him for the city's first NBA title.

All this comes with a backdrop of an enormous jump in the salary cap, going from $70 million this past season to likely somewhere close to $95 million when the league announces the actual number early next week.

So the spending will be out of control. That's for certain.

Just about everything else is uncertain, starting with Durant's status.

"My message to him is just try to get through this, don't make a decision based off anybody else, make your own decision," New York Knicks forward and Durant's Olympic teammate Carmelo Anthony said. "Because at the end of the day, you're the one that has to live with that."

Durant, true to his nature, is tight-lipped about how his decision-making process will actually work.

"I'll factor in everything that's important to me, which is playing basketball at the end of the day, and we'll see what happens," Durant said.

Durant plans on going to New York -- not to play, but to deliberate. Some teams have been granted invites to meet with Durant in the New York area this weekend, and Miami center Hassan Whiteside is planning to meet with teams there as well on Friday. There's been no indication how quickly Durant will reveal if he's staying with the Thunder or moving on, but in Whiteside's case the answer could come on Day 1.

"I'm not calm. Look at me. Woooo!" Whiteside shrieked earlier this week in Miami, when he talked about the looming decision that will take him from someone who made just under $1 million this past season -- pocket change by NBA standards -- to quite probably more than $20 million in each of the next four seasons. "I'm excited, man. C'mon, man. Free agency time."

Whiteside will strike it rich without going to a single All-Star Game first. Bismack Biyombo (who made $2.8 million this season and is expected to at least quintuple that going forward) will probably do the same, and that comes with him not even having been a full-time starter in Toronto.

This is the new NBA.

And it's not changing.

The cap will take another giant leap next season, too. Basketball Hall of Famer Gary Payton stopped playing less than a decade ago; he made about as much in his entire career as Whiteside will likely make in the contract he can sign starting July 7.

Payton equates free agency today to a lottery, with a lot of sweepstakes winners.

"Some of these players, they make decisions because of all of the money," he said. "You're going to get the money. I think you go to a place where you're going to be successful and have a chance to win ... always be in the competition to win a championship."

Payton could have made so much more money now, but he's far from upset about it. He even says a player like James should be making about $50 million now, given what he's done and what he means to the league.

"I got on my mom about that the other day and asked her why she had me so early," Payton said. "It is what it is. It's a different era. I was in the best era. I liked my era. We started all this."

Because there's never been a market like this, given all the new cap room, it seems like no one really knows what to expect.

That includes the Commissioner of the NBA.

"As I've said, there will be unintended consequences from all this additional cap room this summer," Adam Silver said at the All-Star Game back in February. "I just don't know what those consequences will be."

Starting at 12:01 a.m. Eastern time today, when the shopping window officially opens, the league will begin finding out.