Educators focus on plans for teaching every child 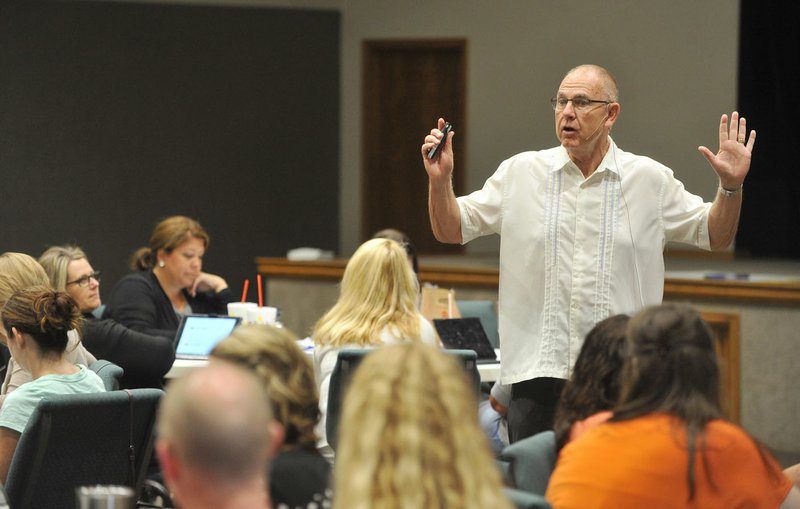 Austin Buffum, author of “Simplifying Response to Intervention” speaks Wednesday to a group of local teachers during a two-day workshop at First Baptist Church in Farmington.

FARMINGTON -- Teachers and principals in Northwest Arkansas are working this summer to improve plans for responding to academic and behavioral needs of every student.

The Northwest Arkansas Education Service Cooperative organized three two-day workshops for about 300 area educators that focus on a "response to intervention" model that begins with school staffs accepting responsibility for ensuring every child learns.

“This is a hard thing to do. If districts and schools are going to do it well, they have to approach it as if it’s rocket science.”

— Doug Fuchs, professor of special education at Vanderbilt University who has expertise in response to intervention

"What you want is to guarantee that no matter what happens or who the teacher is, if a kid needs help, we can identify that and help immediately," said Sara Reeves, an assistant principal at J.O. Kelly Middle School, who attended the first of the workshops in June.

Administrators and teachers at J.O. Kelly spent two years implementing the model, which includes identifying essential skills students need in English, math and science, Reeves said. She said she expects the plan to take five years to develop. The teachers use the same ways of testing to gauge pupils' understanding.

Students who are not required to go to tutoring during Prime Time choose from a variety of activities, such as playing a game in the gym, conducting a science experiment or learning coding, she said.

Schools are using response to intervention models as a way for general education classrooms to accommodate a greater variety of learning needs, said Doug Fuchs, Nicholas Hobbs Chair and professor in Special Education at Vanderbilt University in Nashville.

The concept was developed as a better way to identify children with learning disabilities, Fuchs said. Children were identified based on a discrepancy between their academic potential and their academic achievement. In some cases, discrepancies were a result of poor classroom instruction, rather than a disability.

With response to intervention, schools focus on making sure children receive quality instruction and then evaluating how students respond to the instruction. Those who struggle receive more intensive levels of instruction, depending on need, Fuchs said.

The concept has received more attention since its inclusion in the 2004 version of the Individuals with Disabilities Education Act and with a similar "multi-tiered support systems" concept in the new Every Student Succeeds Act of 2015, Fuchs said.

The Arkansas Department of Education encourages schools to have written response to intervention plans, said Kimberly Friedman, department spokeswoman. Schools also should discuss how to meet the needs of children who need additional assistance.

The June workshop led by Austin Buffum, a longtime educator and author of "Simplifying Response to Intervention," gave Reeves a chance to share and learn from educators who are at various stages of implementing similar models in other Springdale schools, as well as in the Bentonville, Farmington, Greenland, Rogers and West Fork school districts. The training was coordinated through Solution Tree, a company based in Bloomington, Ind.

Educators will receive two more days of training during the school year, said Marcia Sanders, assistant director of the cooperative. Their plans will lead to a more systematic approach for ensuring students receive the same quality of instruction, regardless of whose class they are in.

Parents sometimes worry if certain teachers will help their child more than another teacher, Sanders said. Having a structured approach will help to eliminate those concerns, she said.

The approach promoted by Buffum follows a system with core classroom instruction at the base, followed by a tier with additional support on skills essential for that grade-level and a third tier with more intensive instruction for students working to master foundational skills in reading, writing, number sense, English, attendance and behavior.

The plan requires a school culture where all school employees take responsibility for the learning of every student, he said.

Teachers implementing the approach don't have enough time to teach every skill states expect of children, Buffum said. Instead, many schools across the country are studying the lengthy lists of academic standards by subject to give priority to the most essential skills and concepts that will carry children through their education and into adult life, Buffum said.

The list of essential skills cannot come from a purchased curriculum or from a state department of education but is developed by teachers, he said. The process leads to a guaranteed and viable curriculum because teachers commit to ensuring all children know those skills, Buffum said.

"We've got to know what it is we want every kid to master," Buffum said.

Fuchs is a former co-director of the National Research Center on Learning Disabilities, which was an early source of information on response to intervention. In a schoolwide setting, the systems can be complicated, and many schools have had a difficult time establishing systems and sustaining them, he said.

School officials must be prepared for the time, materials, training and staffing required for an effective program, he said.

"This is a hard thing to do," Fuchs said. "If districts and schools are going to do it well, they have to approach it as if it's rocket science."

Barton began working with his staff last school year to implement some of the "response to intervention" strategies, which Barton prefers to describe as "respond to the learner." Teachers have identified essential skills, but as testing neared, they started to worry, he said.

Barton looks forward to working more on "response to the learner" in the fall. Focusing on essential skills will ensure children know the basics, he said.

Print Headline: Educators focus on plans for teaching every child