As Arkansas petitions flow in, 50 pore over names 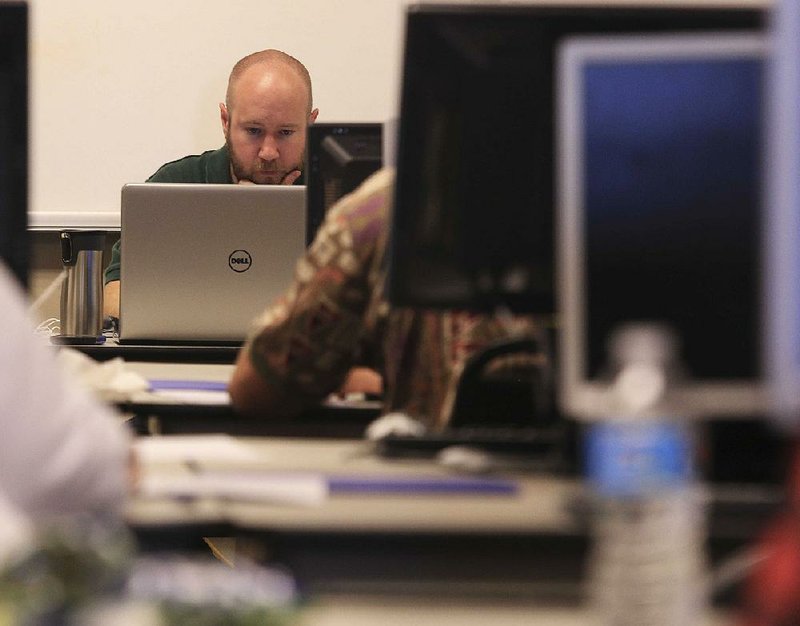 Mitchell Minyard, a staff member in the secretary of state’s office, works Friday to verify signatures for ballot initiatives.

Groups backing initiated acts and constitutional amendments need signatures — tens of thousands of them — to get their proposals on ballots in November.

Verifying those signatures as valid, a task of the secretary of state’s office, takes dedicated office personnel to oversee the process plus dozens of temporary workers. Teachers, college students and others in the short-term summer jobs safeguard the integrity of the system, each for $9.50 an hour.

It’s about 10:30 a.m. on Friday. Felicia Carter of Little Rock, a teacher working as a temp this summer, is verifying that names and addresses on petitions match those of real people in the state’s voter database.

In a windowless room in Little Rock’s Victory Building she stares at a piece of paper — one of thousands turned in to the secretary of state’s office by Arkansans for Compassionate Care. She checks that each signature corresponds with a real Arkansan who is registered to vote and who put pen to paper to get the medical marijuana issue on the ballot.

She’ll repeat the process hundreds of thousands of times over the course of the summer.

Eight to 10 secretary of state employees and 40 temporary workers from ASAP Personnel Services Inc. sit in the room.

“It’s very tedious work. And it’s not glamorous at all,” said Chris Powell, a spokesman for the secretary of state. “There’s a lot of paper and a lot of information and a constant work flow that comes with it. But it’s also educational. It’s really a whole other side of the election process that people don’t see.”

“Attention to detail is the most important thing,” she said. “And some of the names are interesting, too.”

Arkansans for Compassionate Care turned in about 117,000 signatures on June 20. So far, it’s the only group that has turned in signature petitions, which are due Friday. The group backs the Arkansas Medical Cannabis Act.

The group needs 67,887 valid signatures for its initiated act to get on the ballot. A signature is invalidated if it is not from a registered voter, is illegible and not accompanied by any other personally identifying information, or if it’s a forgery, among other criteria.

There are 18 common reasons why an entire page of signatures can be invalidated, according to the 2015-16 Initiatives and Referenda Handbook, which is 55 pages long.

Petition pages cannot be photocopies. They must be signed by a single canvasser under oath and notarized by a single notary. Notaries must use valid notary seals, which do not include the Great Seal of Arkansas. The popular name and ballot title must be attached to each petition sheet that contains signatures. Signature pages cannot contain more than 10 signatures.

The handbook contains spreadsheets that spell out those figures county by county.

Melissa Fults, campaign manager for Arkansans for Compassionate Care, said her group used mostly volunteers to gather the 117,000 signatures on its petitions.

Like most groups, Arkansans for Compassionate Care collected extra signatures as a safeguard because some names will invariably be invalidated.

“We know our [invalidity rate] is going to be higher than usual,” she said. That’s because the group had only a one-month break between the end of the 2014 campaign on the marijuana issue and the start of signature gathering for the 2016 campaign.

The short time frame will likely result in some supporter confusion and some signature duplications, she said. Nevertheless, she expects the secretary of state’s office to be done checking signatures by Tuesday.

“That’s their hope and ours, too,” she said.

The group has been fundraising since 2014 and has taken in between $800 and $37,961 per month, reports indicate. It has raised more than $53,000 in donations of less than $1,000 each — more than every other ballot question committee combined.

Generally speaking, signatures collected by paid canvassers have a higher validity rate than those collected by volunteers, Powell said.

Arkansans United for Medical Marijuana is supporting the Arkansas Medical Marijuana Amendment. Because it’s a proposed constitutional amendment rather than an initiated act, the group must collect 84,859 valid signatures to get the measure on the ballot.

Arkansans United for Medical Marijuana is entirely funded by the Bevans Family Limited Partnership in Maumelle. The partnership’s address matches that of Lake Liquor in Maumelle.

m An initiated proposal on the length of legislators’ terms in office is backed by Restore Term Limits. The group is financially supported by U.S. Term Limits, a Florida organization that advocates for term limits, and The Homestead at P.O. Box 3157 in Little Rock. That’s the same post office box that Winrock Farms has used in the past.

m A measure to allow three privately owned casinos to open in Washington, Boone and Miller counties is backed by Arkansas Wins in 2016. The measure is solely funded by Arkansas Resorts and Gaming of Branson.

Volunteers are gathering signatures for the Arkansas Cannabis Amendment, which seeks to legalize all marijuana use. Various groups have sprung up to support versions of that measure, including True Grass, Arkansas True Grass and the Citizens Alliance for the Legalization of Marijuana.

Powell said that as more groups turn in their signature petitions, it may be necessary for the state to add a night shift of workers to verify the signatures.

“It’s interesting, trying to find these people,” said Peggy Watson, a teacher who lives in North Little Rock and was verifying signatures Friday. “It’s making sure a person’s [signature] counts.”

Print Headline: As petitions flow in, 50 pore over names