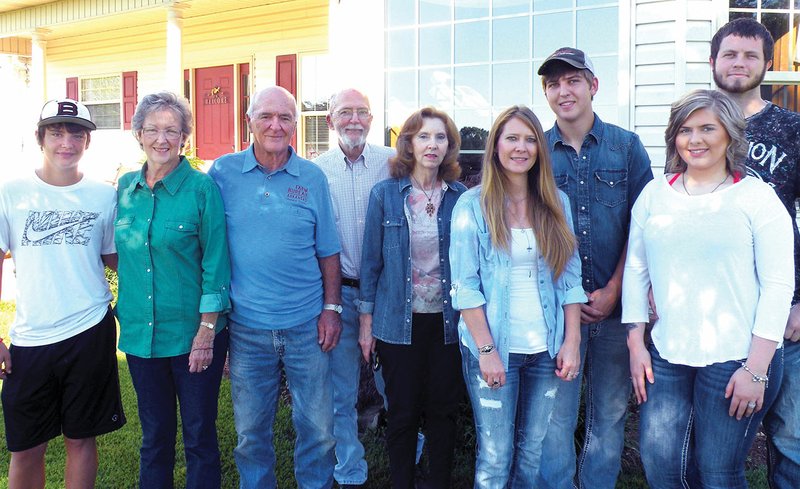 “It’s an honor to be named Farm Family of the Year,” Tommy said. “I know a lot more people deserve it more than we do, but I appreciate the recognition.”

The couple’s extended family includes Tommy’s brother, Richard Sorrells, and his wife, Julia, and their daughter, Andrea Wicker, and her children, Carson Wicker and Lauren Wilson.

Tommy and Joy have been farming for 50 years. They farm a total of 623 acres on which they raise 70 head of Angus beef cattle and 120 acres of hay. Tommy leases about 400 acres from his brother, Richard.

Tommy sells the cattle through the local Glenwood Livestock Market, occasionally selling a calf straight off the farm, which has always been in the family. The family raises hay primarily to feed the cattle.

Tommy is the son of the late Floyd Sorrells and the late Ruby Houser Sorrells. Tommy graduated from Lake Hamilton High School in 1959 and from Southern State College (now Southern Arkansas University) in Magnolia in 1964 with a degree in business agriculture.

“My mother helped to organize a 4-H club in the Royal community. I got involved and started showing beef, sheep and dairy animals,” Tommy said.

“Tom Stone, president of First National Bank, set up a loan program for youth to buy animals. I bought my first cow with this loan,” Tommy said.

“As a small child, I would ride behind my father on his horse as he checked the pastures and cattle. … After graduation [from college], I went into partnership with my dad,” Tommy said.

“In later years, I rented the farm from my mother and dad. I continued to rent the farm until my mother passed away. Then part of the farm went to my brother, which I continue to lease,” Tommy said.

“Dad was the one who put this [farm] all together. He lost a leg cutting hay, but that never slowed him down,” Tommy said.

“I always wanted to come back and farm, but to supplement my income, I had the opportunity to work for the state, and I did that.”

Tommy retired as an area manager for the Arkansas Department of Health, serving six counties.

“I worked with health units from Saline County all the way to Mena,” he said.

Joy is the daughter of the late Oren and Lecie Sanders. She has two living siblings — Paul Sanders and Charles Sanders, who both live in Pearcy. Another brother, Doyle Sanders, is deceased.

Joy also graduated from Lake Hamilton High School in 1959. She worked at a bank in Hot Springs until the couple’s daughter was about 3.

“Then she stayed at home and took care of our child and helped me on the farm,” Tommy said.

He has “deeded over 120 acres to my daughter, which I have a lifetime to use,” Tommy said.

“My grandson, Weston, has 3 head of cattle and shows in the county fair,” he said. “My niece, Andrea, has three head of cattle, and her son, Carson, helps on the farm.

“I hope my grandchildren will decide to continue to farm one day, but now, both granddaughters have decided on other careers, and my grandson is all into football and baseball right now.”

The Sorrells family attends Oaklawn Missionary Baptist Church in Hot Springs, where Tommy is a member of the finance committee and Joy is a teacher in the children’s chapel.