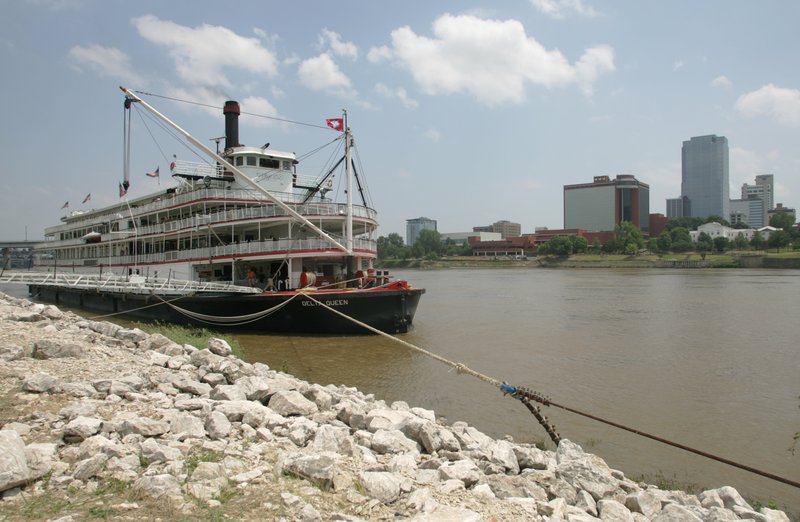 The riverboat Delta Queen is tied up on the North Little Rock side of the Arkansas River in this June 7, 2007 file photo. ( Jeff Mitchell)

WASHINGTON -- The Delta Queen is one step closer to traveling the Mississippi River after a Senate panel endorsed legislation enabling its return to service.

The Senate Commerce, Science and Transportation Committee has voted to support S. 1717, a bill that would exempt the historic steamship from the Safety at Sea Act.

The law prohibits passenger vessels with rooms for 50 or more people from plying the waters unless those vessels are made of fire-retardant materials. The steamboat, completed in 1927, is made of wood.

Currently moored in Houma, La., roughly an hour southwest of New Orleans, the ship will need between $5 million and $7 million in repairs before it's ready to carry passengers.

Work, paid for by the owners, will begin once an exemption is approved, boosters say.

Thursday's vote was an important first step, according to Cornel Martin, president and chief executive officer of the Delta Queen Steamboat Co.

The legislation must still pass the full Senate and get through the House before it can reach the president's desk.

"It's a pretty big day for the Delta Queen," Martin said. "It's the first action we've seen in this Congress, so it's very promising and very hopeful."

The two U.S. senators from Arkansas, John Boozman and Tom Cotton, are among eight Senate co-sponsors.

An identical bill, H.R. 1248, awaits action by the House Transportation and Infrastructure Committee. It has 21 House co-sponsors, including a Republican representing the Arkansas Delta, U.S. Rep. Rick Crawford of Jonesboro.

The Safety at Sea Act, which stopped the Delta Queen from navigating the river, was signed into law in 1966.

For decades, Congress periodically approved exemptions so the Delta Queen could continue carrying passengers along the Mississippi.

The last exemption ran out in 2008. Supporters have been trying to get a new one ever since.

Legislation granting a reprieve passed the House in 2013 but died in the Senate.

For five years, the ship was based in Chattanooga, Tenn. While no longer offering overnight cruises, the Delta Queen functioned as a restaurant, bar and "floating hotel" for guests willing to rest near the river bank.

Martin's group purchased the steamboat in 2015. He spent much of last year in Washington lobbying lawmakers for a new exemption.

If restored, the boat will be based in Kimmswick, Mo., roughly 25 miles south of St. Louis.

The legislation requires the operators to slowly phase out the use of combustible materials. Each year, the owners must make alterations to at least 10 percent of the area that is not built with fire-retardant material.

When possible, changes will be "consistent with the preservation of the historic integrity of the vessel" in areas that passengers use or see, according to the Senate legislation.

The measure will likely face opposition once it hits the House and Senate floors. U.S. Rep. John Garamendi, D-Calif., called the Delta Queen "a fire trap" during the 2013 debate on similar legislation.

Arkansas lawmakers are eager to see the ship's return.

"Steamboats like the Delta Queen are an important part of Arkansas heritage. By allowing the Delta Queen -- an iconic piece of American history -- to operate on our inland waterways again, we can create jobs and bring tourist dollars to communities in the Delta region," Boozman said.

The commerce committee vote "makes this goal one step closer to reality," he added.

Crawford, whose 1st District includes all of the state's Mississippi River border, also applauded the vote.

"The Delta Queen is a physical reminder of our region's rich river heritage. The action in the Senate this week is a good sign that we may see some movement on the issue before year's end, and I look forward to seeing her fully operational as she was for so many decades," he said.

Once it's restored, the 285-foot-long vessel would travel "the entire inland river system," Martin said -- north to Minnesota and east to Pittsburgh.

There will also be trips along the Arkansas River, he added.

Over the years, the Delta Queen has carried passengers to Fort Smith, Little Rock and Pine Bluff, with another stop near Petit Jean State Park.

It also would glide past Phillips County on a regular basis as it traveled up and down the Mississippi.

"The Delta Queen used to stop in Helena, so we're really excited about the possibility of them visiting our community again," said Jay Hollowell, the mayor of Helena-West Helena.

"It's a floating piece of history, in my book," he said.