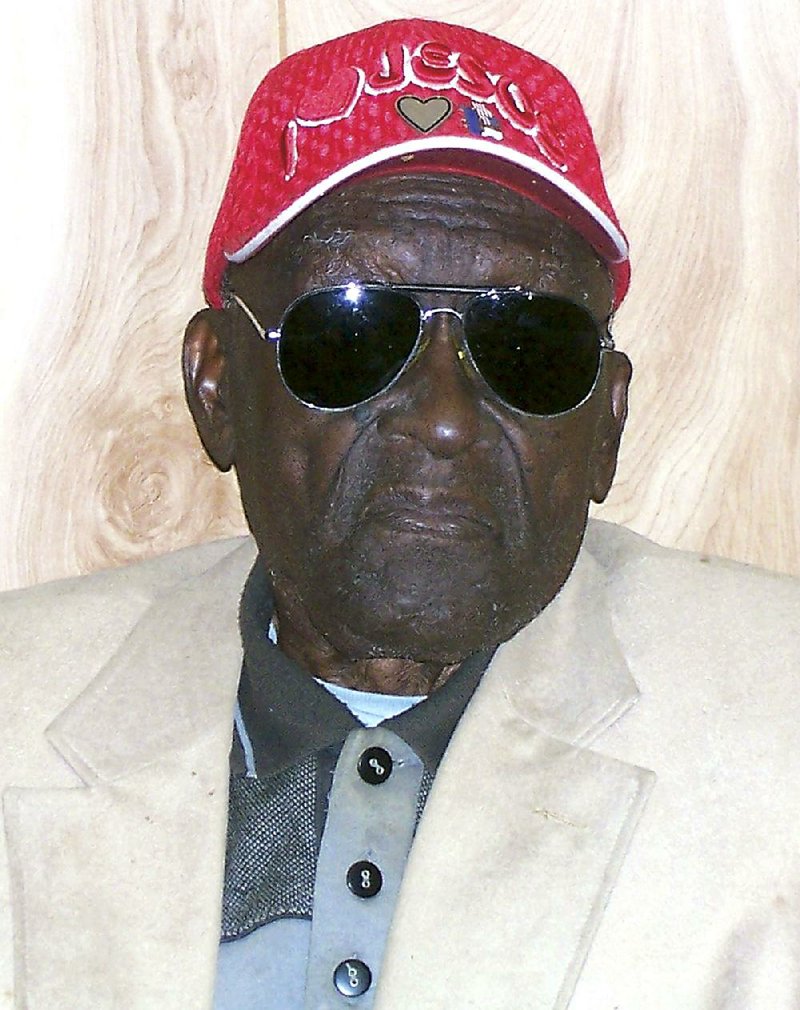 In this 2011 photo provided by the Pine Bluff Commercial, Monroe Isadore poses for photos on his 105th birthday in Pine Bluff, Ark. Authorities in Arkansas halted a standoff on Saturday, Sept. 7, 2013, when they shot and killed Isadore, 107, who opened fire at them. (AP Photo/Courtesy Pine Bluff Commercial)

PINE BLUFF -- Police officers who received medals of valor for their roles in the shooting of a 107-year-old Pine Bluff man during a September 2013 standoff will have to give the medals back to the city.

The Pine Bluff City Council voted unanimously Monday to rescind all lifesaving medals of valor or awards given to Pine Bluff police officers associated with the shooting of Monroe Isadore. The resolution instructs the officers to return the medals to the mayor's office.

Alderman Thelma Walker had the item put on Monday's agenda. She struggled to speak as she recalled seeing what happened to Isadore during the standoff.

"I saw the film. Isadore was sitting on the bed up against the wall," Walker said, her voice shaking. "He didn't know what was happening. He shot one time and the next thing they came in and shoot half of his head off."

The shooting attracted national attention. However, a special prosecutor cleared police of wrongdoing two months after the shooting. The prosecutor said officers acted within the scope of their job to protect themselves, fellow officers and others when they returned fire after Isadore fired a pistol in the direction of tactical team officers. No officers were injured.

Isadore was shot after police were called on Sept. 7, 2013, to a home where he rented a room. He had refused to leave when a relative came to move him to an apartment. According to police, he brandished a gun and pointed it at the homeowner. After police arrived, Isadore fired the gun at a door. SWAT officers were summoned, and, after Isadore reportedly fired two more shots, a team kicked in the door and shot him.

A federal lawsuit filed against Pine Bluff Police Chief Jeff Hubanks, officer Brad Vilches and the city stemming from the shooting death was dismissed in a summary judgment.

The lawsuit had been filed by two of Isadore's daughters, Marilyn Monroe Howard and Paula Aguilar, who contended that "his right to be free from excessive force under the Fourth and Fourteenth Amendments of the United States Constitution was violated and he was the victim of battery under Arkansas law."

Hubanks said late Monday he did not have information about how many medals were awarded to police.

Alderman Glen Brown Sr. said he shared Walker's sentiments and that he had wanted to show outrage for how Isadore died after the shooting but could not because he feared then he would not be able to be part of mediation with the family. Brown said he was the only politician Isadore ever allowed to a put a sign in his yard.

"For 35 years I knew him as a grandpa, and to lose him like that is so disgraceful," Brown said. "To be awarded, to be awarded. It doesn't make sense to me."

Members of the Pine Bluff NAACP chapter attended Monday's meeting, but President Wanda V. Neal was too overcome with emotion to make introductions so she handed off that duty to Dorothy Oliver, first vice president of the chapter. After the vote, Neal said she appreciated the council allowing Oliver to have extra time to speak during the public comments portion of the meeting.

"I'm also very pleased with the outcome of this vote and for those medals to be taken back," Neal said. "I think it is so wrong to award officers who have taken a 107-year-old's life."

Traci McDonel, a Pine Bluff police officer, said she had attended Monday night's meeting to see what the council would do. A 10-year veteran of the force, McDonel said she was worried what kind of message the action would send to the Police Department.

Mayor Debe Hollingsworth said she did not yet know how the police officers would go about turning in the medals to her office.

"I'm just trying to digest all this," Hollingsworth said.

Also Monday, a resolution to override Hollingsworth's veto of an ordinance that would separate the animal control division from the police department failed by a 5 to 2 vote. Hollingsworth placed the division under police but later came under fire, as did the Police Department, when the same officer who shot Monroe, Vilches, shot what some people claim was a pet potbellied pig because the pig was not behind a fence.