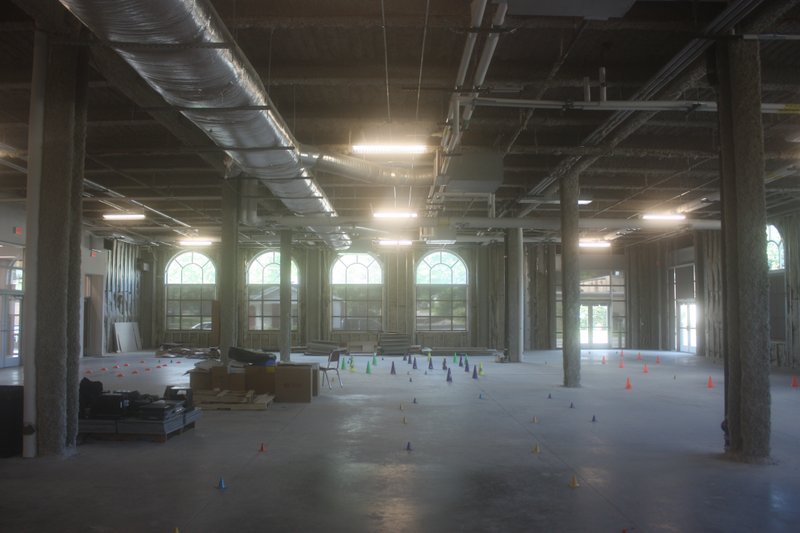 Nearly 8,000 square feet of the 12th Street Police Substation remains vacant approaching two years after its opening, as the city is still hoping to find tenants for up to four business spaces.

Nearly two years after Little Rock opened a new mixed-use police substation on 12th Street, the city is still trying to make good on its promise to open new businesses on the struggling commercial corridor.

About 8,000 square feet, or 18 percent, of the $12.5 million building sits vacant today. The city says it is looking for up to four businesses to lease out the first-floor space, where dividing walls have yet to be put in and exposed ductwork hangs over the concrete floor.

If all goes according to plan, the city says, it hopes to move the first business into the space starting in early 2017, more than two years since the opening of the major component of an attempted revitalization of the surrounding community.

“As far as I'm concerned, there's still excitement about the opportunity,” said Ken Richardson, the city director for Ward 2, which includes the 12th Street corridor. Richardson lobbied for business space as part of the effort.

Police Chief Kenton Buckner, whose department has inhabited the building since September 2014, called the substation's presence in the community a success. Asked about the languishing business space, he noted: “The wheels of government turn slowly."

Little Rock recently approved an offer by downtown-based Citadel Real Estate Services to work as a consultant in leasing out the spaces. Scott Carter, the city's special projects administrator, said Citadel was the only group to submit an offer and is currently in contract negotiations.

Richardson said he has had discussions with one bank about opening a possible branch within the substation. He also said he would like to see a health food store open, calling the area a "food desert."

According to an Arkansas Online map of business locations, there is one full-service grocery store within 1 mile of the new substation. In that same area, there are four liquor stores and one pawn shop. There are two banks, both of them on Markham Avenue to the north, across Interstate 630.

“I thought we would have something in place before that, but given that this is a new process and given that we had a key staff member leave the city, that was part of the process,” Richardson said.

Last fall, the city employee tasked with overseeing the search for a consultant — Frederick Gentry — left his position, but his departure was not related to the project, City Manager Bruce Moore said. After Gentry's departure, Carter was put in charge of the work.

Before Gentry left, the city issued a request for consultants to bid to conduct leasing of the space. However, Moore said, the city determined a request for the lowest bidder was not appropriate for the project, and a new request was issued in March seeking real estate qualifications.

In the meantime, residents who were given promises of new shops and offices have been left waiting, says the Rev. William H. Robinson, the director of Black Community Developers Inc..

“Part of the letdown was it was done piecemeal,” said Robinson, who is also a pastor at Theresa Hoover United Methodist Church. “I think it's an excellent idea, but we have to get busy to get it to work out.”

In an interview at the substation, Carter said it's important that the city fill the space "the right way."

"But it's also important that we don't let it languish because we don't want to lose public trust,” he said.

After a spokesman responded to questions about how much the city spent on the signs, the city then spent another $239 replacing them in May with new signs that pared the statement down to “Commercial business coming soon.”

The station was actually paid for by a 3/8 percent sales-tax increase passed by voters in 2011 for capital projects. City spokesman Jennifer Godwin noted that the "previous signs did not indicate that as they should have."