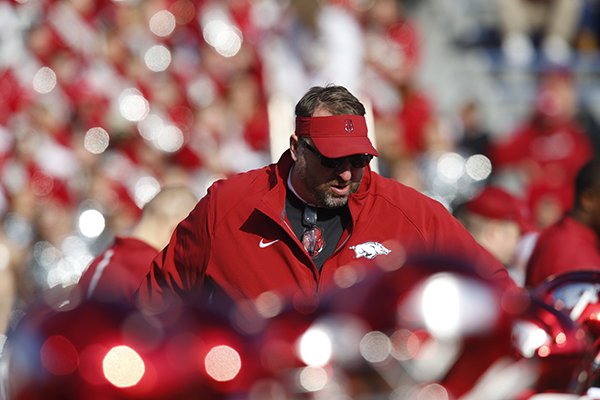 Arkansas coach Bret Bielema talks to players prior to the Razorbacks' game against Kansas State on Saturday, Jan. 2, 2016, at Liberty Bowl Memorial Stadium in Memphis, Tenn.

FAYETTEVILLE — Arkansas' football series against Michigan has been canceled in order for the Wolverines to resume their rivalry with Notre Dame.

The Razorbacks were to travel to Michigan Stadium to open the 2018 season, with the Wolverines returning the trip for the season-opener the following year. Arkansas athletics director Jeff Long said he was informed of Michigan's decision via email Wednesday night.

Arkansas can apply for SEC waiver

“Primarily, we are disappointed in Michigan’s timing in pulling out of a nonconference football series between the SEC and the Big Ten that has been set for four years,” Long said in a statement. “While there are many other quality opponents that would help us strengthen our nonconference schedule, the late notice of Michigan’s cancellation makes securing those games substantially more difficult.

"Our focus will be to find a program that welcomes the opportunity to compete against a nationally respected program in the most competitive conference in college football.”

Arkansas and Michigan scheduled the series in 2012 after the Wolverines' longtime series with Notre Dame was canceled. The Wolverines will pay the Razorbacks $2 million to buy-out the contract.

"I chose $2,000,000 as a cancellation fee - without much concern it would ever be an issue," former Michigan athletics director Dave Brandon wrote in a letter to Long dated Sept. 26, 2012, that was obtained through a Freedom of Information Act request. "However, not knowing who the (athletics directors) at our respective schools may or may not be in 2018/19, we should likely have a more punitive number for cancelling than the $400,000 we are trading to cover travel expenses."

The Detroit Free Press reported in May that Michigan and Notre Dame were in talks to play again because both shared an open week during the 2019 season. The Free Press reported the Wolverines may move or cancel the Arkansas series to accommodate a game against the Fighting Irish, and playing two marquee nonconference games was undesirable for Michigan after the Big Ten moved to a nine-game conference schedule.

Arkansas coach Bret Bielema - a former player at Iowa and coach at Wisconsin - called Michigan "one of my favorite Big Ten conference rivals."

“I’m disappointed that won’t happen now," Bielema said in a statement. "But I know that our administration will work to get a quality nonconference game that will help prepare us to compete in the SEC and nationally.”

With the Michigan series canceled, Arkansas will be left looking for its own marquee nonconference games for 2018 and 2019. The Razorbacks are also looking for a major opponent for the 2020 season and have had talks about playing teams at neutral sites in Houston, Kansas City, Mo., and Orlando, Fla., Long said last year.

The Southeastern Conference mandates its teams play at least one opponent from a power five conference each season, or against an independent. Arkansas is scheduled to play TCU this year and next, and Texas in 2021.

Prior to the Michigan series being canceled, the Razorbacks had the fewest future football games scheduled of any power five team in the country, according to SBNation's NunesMagician.com.