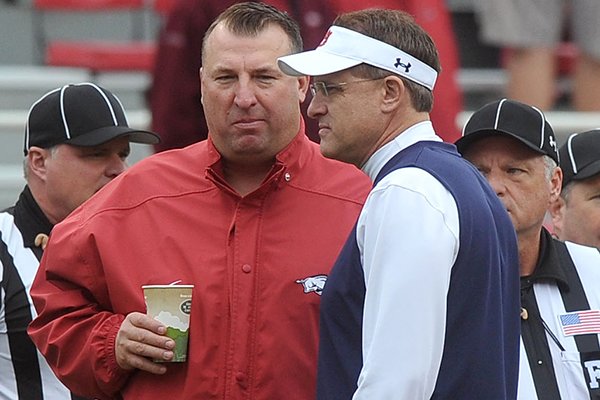 Commissioner Greg Sankey gets things started with his second state of the conference address at 11:35 a.m. He'll be followed by Fort Smith native Gus Malzahn, the fourth-year Auburn coach who is trying to lead the Tigers back to prominence after last year's 7-6 record.

NOTE Each team will be represented by three players as well as the coach.

For the first time in 11 years media days will be held without Steve Spurrier, whose sharp tongue spiced up the event for 23 of the past 26 years during his stints at Florida and South Carolina.

"There was always a buzz when Steve Spurrier spoke at media days," said UA associate athletic director Kevin Trainor, who will serve as moderator in the print media room for the sixth consecutive year. "I'm sure he'll be weighing in some way or the other during the week."

The SEC has won eight of the past 10 national champions, thanks in large part to Coach Nick Saban and the Alabama Crimson Tide.

Malzahn is one of several SEC coaches regarded as being on the hot seat heading into 2016. LSU's Miles, who survived an overthrow attempt late last year after the Tigers lost consecutive games to Alabama, Arkansas and Ole Miss, will be at the podium on Thursday.

Texas A&M's Kevin Sumlin, Kentucky's Mark Stoops and Vanderbilt's Derek Mason could also be in precarious positions, depending on how their seasons go.

Then again, as Mississippi State Coach Dan Mullen pointed out three years ago when he was riding a hot seat in Starkville, "You're about a game away in this league from that situation."

Miles is the only SEC coach with more than 10 years at the same school, but there are three first-year coaches -- Georgia's Kirby Smart, South Carolina's Will Muschamp and Missouri's Barry Odom -- all in the East division. All three were defensive coordinators in the SEC last season.

"It will definitely be a different look this year, especially on the Eastern side," Trainor said. "The East has all three of the newcomers, while the West will all have guys who have been there four years or more."

Arkansas' Bielema, who seldom backs away from giving an opinion, has a chance to replace Spurrier as the most quotable SEC coach.

"I think Bret has a tremendous sense of humor, people always pay attention to what he has to say, and he delivers it in an entertaining way," Trainor said.

Not long ago, SEC media days was an end-of-July event that led into the opening of fall camp, but it has continued to creep up earlier on the calendar to stay ahead of the other Power 5 conferences.

"A lot of fun is going into it not knowing exactly what will come out of it," Trainor said. "One thing is for certain, people all over the country will be paying attention."