Rev Room to be full of blues 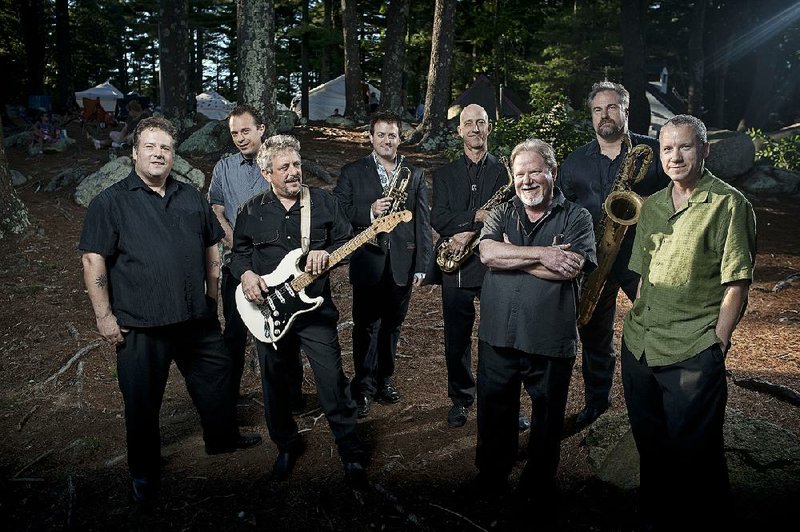 The band Roomful of Blues

Few actively remaining bands can boast of having outlasted The Beatles, especially groups on this side of the Atlantic. But Roomful of Blues has been part of the American musical scene since 1967.

"Next year will mark 50 years for our band," says Chris Vachon, guitarist and bandleader of the eight-man group since 1990. "I don't know how we do it, just, I suppose, that we like what we're doing. Rich Lataille, our alto and tenor sax guy, is the only original member left. As the years have gone by, I think the count is 48 former members."

Current members who will perform Wednesday at Little Rock's Revolution Room along with Vachon are Phil Pemberton on vocals, John Turner on upright and electric bass, Chris Rivelli on drums, Rusty Scott on piano and B3 organ, Doug Wolverton on trumpet and Mark Earley on baritone and tenor sax.

Vachon admits keeping a large band together is a challenge.

"It used to be a lot easier, when clubs would do shows on weekdays, but there's not that much of that anymore," he says. "So that means most of our work is on weekends, so we don't often get very far away from our base in New England. We do get to the Midwest occasionally, but not much farther. I remember we did the King Biscuit Blues Festival in Helena about 10 years ago, I think.

"We have a big tour bus, an older model, but it works OK."

As to what sort of blues goes on in those roomfuls, Vachon says, "We are definitely a dance band. We mix it up, going from vocals to instrumentals, and from originals to obscure covers and stuff by Big Joe Turner and Count Basie. We do the 'low-down' kind of blues and sounds associated with New Orleans, Kansas City and lots of places."

Over the years, Roomful of Blues has performed with Count Basie, B.B. King, Otis Rush, Stevie Ray Vaughan, Pat Benatar, Carlos Santana and Eric Clapton. Starting with a self-titled album in 1978 on Island Records, the band has released 20 studio albums, three live records and two compilations. Alligator Records has been the band's label since 2003 and, before that, the band recorded six albums for Bullseye Blues, plus other albums on Mango, Varrick, Muse, Black Top, Rounder and Chrysalis Records.

The group's most recent album, 45 LIVE, was released in 2013 to mark the band's 45th anniversary. There have been five Grammy Award nominations, along with seven Blues Music Awards and two "Best Blues Band" awards from the DownBeat International Critics Poll.

Vachon says his love of guitar began when he was 9 or 10, and it was helped along by listening to his sister's records by Chubby Checker and The Beatles.

"When I was 13 or 14, a friend gave me B.B. King's album, Live at the Regal, which really did it for me," he says. "I was hooked. And like most guitar players, I have a few. I just moved, and I counted 18 of them. I didn't know I had that many, and I might have missed a few, hiding in closets or corners."

Print Headline: Rev Room to be full of blues