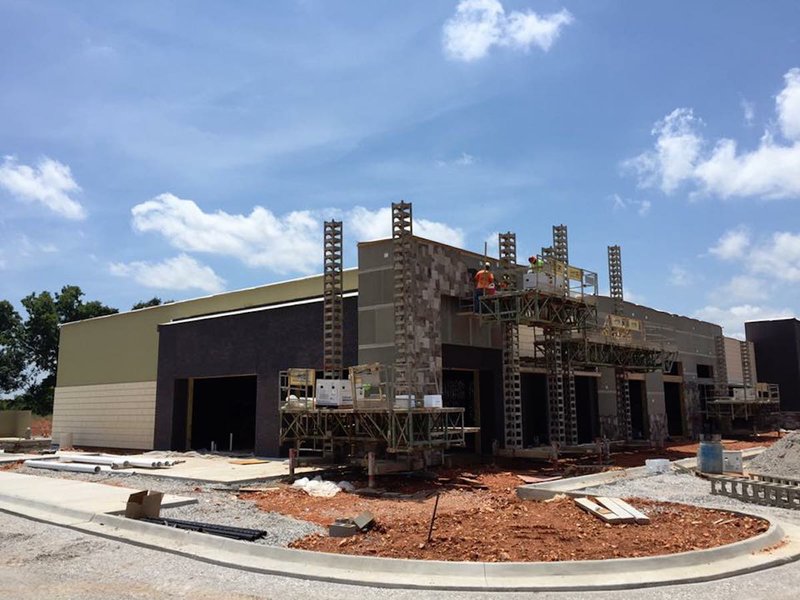 Construction is ongoing for the Fuzzy's Taco Shop location at 4204 South J.B. Hunt Drive, which is next to the Wal-Mart Arkansas Music Pavilion. That restaurant is set to open this fall.

Texas-based Fuzzy’s Taco Shop is set to enter the Arkansas market, with at least two locations scheduled to open later this year in Jacksonville and Rogers.

Within the next five years, up to five additional locations in central Arkansas are planned in Pulaski, Saline and Faulkner counties, including cities such as Little Rock, Benton and Bryant, according to owner Danny Wintz.

The timing for those restaurant openings will depend on the success of the Jacksonville location, he said.

Wintz, who grew up in Jacksonville and now lives in the Dallas area, said the 4,900-square-foot location in his hometown is tentatively scheduled to open in November at 140 John Harden Drive.

The central Arkansas project also includes Wintz's wife, Amy, as a co-owner and Mark Needler of Little Rock as operating manager and co-owner.

A Rogers location is also planned to open this fall at 4204 South J.B. Hunt Drive, co-owner Wesley Travis said. An additional location in that part of the state is also in the works, though information regarding that site was not released.

Travis, who described himself as a "foodie," said he has an extensive background in restaurant management at MarketPlace Grill and Cheddar's Scratch Kitchen locations in Fort Smith.

The franchise owners bringing the Baja-style taco shop to different parts of Arkansas described the restaurant as having a “super fun atmosphere” with a wide selection of menu items packed with “lots of flavor.”

Among the items on the menu at Fuzzy's Taco Shop: Baja-style tacos, nachos, quesadillas, enchiladas, fajitas, burritos and breakfast options.

More information about Fuzzy's Taco Shop can be found by visiting its website or by calling (817) 624-8226. Updates on the Jacksonville and Rogers locations can also be found on their Facebook pages.