Assistants together once again 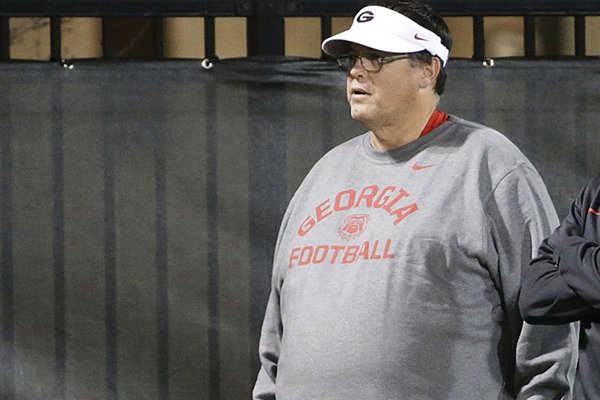 HOOVER, Ala. -- The Jim Chaney-Sam Pittman tandem is teaming up on its third SEC offense this year at Georgia.

Chaney was offensive coordinator at Arkansas for Bret Bielema in 2013 and '14 before departing for Pittsburgh, while Pittman directed the Hogs offensive line from 2013-15. Chaney and Pittman also worked together at Tennessee.

"They are definitely a combo," Georgia Coach Kirby Smart said Tuesday during his first appearance at SEC media days. "These two guys are very witty, very funny, and they are very good football coaches and they brought a lot of experience and value."

Georgia senior center Brandon Kublanow said it's fun to be around Chaney and Pittman.

"They have great chemistry and an awesome relationship," Kublanow said. "They're both great guys and work really well together, which I think is an amazing thing. You don't always get that on a coaching staff."

"Both those things attracted me to them," Smart said. "They've got good, proven credentials with what they've done. They've been a great pair."

Myles did not want to reveal details of the subject matter of his poetry, but he said "love" was his favorite theme.

"So much drama and so many problems that arise from something so small on social media," Garrett said. "Getting off it didn't take much effort. It doesn't take away from your day. It actually opens up more things for you to do, more productive things you can do with your life."

He said Tuesday his goal was to post 20 sacks and be the first pick in the NFL Draft.

"He beats to a different drum," Sumlin said. "I looked down on the plane today, he had some flip-flops on and a Marvel comic book hat. So that's what we needed to see out of our toughest guy on defense. He's just a different guy. He's a great young man."

Staton Flurry, an LSU fan and owner of Flurry Stables in Hot Springs, has named one his thoroughbreds "Fournette" in honor of LSU All-American tailback Leonard Fournette.

The idea came to him after buying the horse in March 2015.

"My trainer said, 'It's a big, stout, tough-looking horse,' " Flurry told Nola.com, the website for the New Orleans Times-Picayune. "I said, 'What better name than Fournette.' Hopefully, it will make him run like Leonard."

Fournette, a 3-year-old, will make his racing debut Friday in the sixth race at Belmont Park in New York.

Noel Mazzone's first game as Texas A&M offensive coordinator will be the season opener Sept. 3 against UCLA, where he held the same job the previous four years with Bruins Coach Jim Mora.

"Yeah, we'll have some feedback on UCLA," Aggies Coach Kevin Sumlin said. "But Jim knows a little bit about Noel Mazzone, too. That's give and take in that deal."

Georgia holds the series lead against all other opponents on its schedule this year with the exception of Tennessee, with the Volunteers leading the series 22-21-2. The Bulldogs have won two in a row against Auburn to lead the most played series in the SEC by a count of 56-55-8.

Mississippi State has a losing record against every SEC team on its schedule this season with one exception. The Bulldogs hold a 22-21 lead in their series against Kentucky, their annual cross-division rival from the SEC East.

Texas A&M quarterback Trevor Knight is a newcomer with the Aggies, but his appearance at SEC media days wasn't his first experience at a major media event.

Knight transferred to Texas A&M as a graduate student from Oklahoma, whom he twice represented at Big 12 media days, and helped lead the Sooners to a Sugar Bowl victory over Alabama.

"Very similar," Knight said of the SEC and Big 12 experiences. "Obviously the same setup, going from room to room to room. People have said maybe there's more media here. I can't really tell. I think they're both pretty similar."

Tennessee Coach Butch Jones finished his opening comments with a shout out to his mother.

"I've never done this before but I'm going to say it," Jones said, adding that his mother is a regular SEC Network viewer who had her 79th birthday Tuesday.

"Mom, I love you and happy birthday," Jones said.

Tennessee Coach Butch Jones said Texas A&M snagged a bus from the Birmingham airport that was intended for the Volunteers arriving for SEC media days.

"Coach Sumlin changed buses with us and it was 110 degrees on that bus with no air conditioning," said Jones, adding that he and the Volunteer players at media days sweated throughout their bus ride to the Hyatt Wynfrey Hotel.

Tennessee will play the Aggies in College Station, Texas, on Oct. 8 in a cross-division game.

Georgia players have been arrested a combined seven times since March 20, the most recent being sophomore defensive lineman Jonathan Ledbetter, 18, for driving under the influence of alcohol and underage drinking.

Ledbetter is among three players who have been arrested twice in that span, including another underage drinking charge.

Defensive back Chad Clay was dismissed from the team by Coach Kirby Smart after being arrested for possessing a BB gun on campus and stealing a $30 pair of headphones, and defensive lineman Chauncey Rivers was dismissed after drug-related arrests.

"A couple of guys got arrested twice, and a couple of them for real stupid stuff," Kublanow said. "We're not the only college where some guys on the team are getting in trouble.

"These are young college kids and things happen. But we need to learn from those experiences and move on."

Smart hasn't been specific about Ledbetter's punishment, but his DUI arrest requires a two-game suspension under Georgia's athletic department policy.

"It's unfortunate, because Ledbetter has worked really hard this summer," Kublanow said. "He's got some issues off the field, but we're not going to just drop him. He's still part of our family."

Print Headline: Assistants together once again