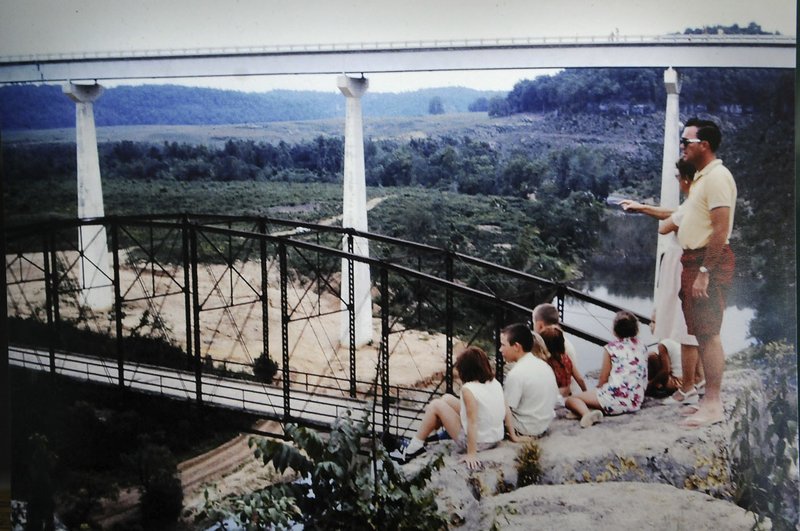 The old Arkansas 12 bridge over the White River is seen during the early 1960s. The land to the right behind the bridge is now the Prairie Creek and Beaver Shores communities.

Gazing at the vast expanse of shimmering, blue Beaver Lake, it's hard to fathom the White River flowing through the hill country before the reservoir was completed 50 years ago. 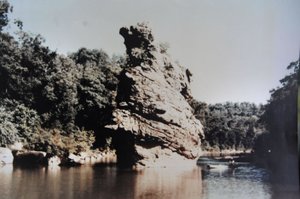 Photo by Courtesy photo
A paddler in a jon boat floats past a large rock in the White River one-half mile to a mile south of Arkansas 12. Beaver Lake now covers the rock, estimated to be 60 feet tall. 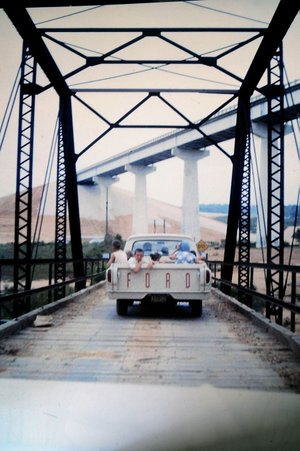 Photo by Courtesy photo
A drive along the old Arkansas 12 bridge under the new bridge. 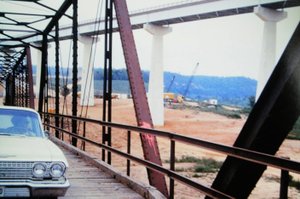 Photo by Courtesy photo
Work to get land ready for Beaver Lake is seen by a motorist on the old Arkansas 12 bridge.

The Beaver Lake project was finished in 1966 when the reservoir filled and the dam's powerhouse began producing electricity. The lake is a haven for fishing, swimming and camping today just as the White River was decades ago.

Beaver Lake is 50 years old this year. The lake filled in 1966 and the dam started producing electricity.

The Army Corps of Engineers plans a celebration at Beaver Dam at 2 p.m., on Oct. 6, said Alan Bland, a Corps park ranger at Beaver Lake. The event will be at the day-use area on the north end of Beaver Dam. Activities include speakers, refreshments, and tours of the dam’s powerhouse.

Most boaters and fishermen know the lake well. Few are lucky enough to have enjoyed the deep, clear pools and laughing shoals of the White River before the lake was built.

Mike Mills, owner of Buffalo Outdoor Center near the Buffalo River at Ponca, grew up in Lowell not far from the White River. One of his boyhood duties was paddling a canoe down the White River while his dad fished.

"I still remember that canoe. It was a 1950 Grumman sport canoe with three seats," Mills said. He was 8 when he started paddling his dad, George Mills, Jr., down the river.

A frequent float was to launch near the old Highway 68 bridge, now U.S. 412 and go five to 7 miles downstream. A family friend owned a farm on the river where the father and son would take out.

"It was a nice, slow, easy float. There were some riffles, but no real rapids, just lazy current. The holes were deep. There were some bluffs about like you see now on the lower part of the Buffalo River. The scenery was beautiful, and it was quiet. You never saw anybody," Mills said.

Fishing was good. His dad used a fly rod with a popping bug tied to the line. He'd catch all kinds of fish, with largemouth bass being the prize.

"He caught a lot, but we only kept enough fish to eat, maybe six or seven fish," Mills said.

His dad first took him to the Buffalo River in 1965. Little did Mills know then that he'd make his living in the canoeing and lodging business at Ponca with Buffalo Outdoor Center.

He's still chief boat paddler today. Only now it's his wife, Rhonda, fishing in the bow while Mills paddles in the stern.

While Mills was canoeing near Lowell and Springdale, Bob Ross was plying the White River downstream near Garfield.

Ross lives near Beaver Lake east of Rogers. He still enjoys canoeing and fishing the Ozarks' streams today. He has fond memories of growing up on a 400-acre farm eight miles from the White River.

"Come summertime, we'd be busy on the farm. My dad had a big work ethic, but once a week he'd put down his tools and say, 'Boys, let's go fishing,'" Ross recalled. Ross, his dad and two brothers would head to the river.

"We even had a hill where we'd dig worms on the way called "red worm hill," Ross said. "We'd fish awhile and swim awhile."

His dad, Howard Ross, would run some trotlines for catfish with the help of his three boys.

"Sometimes we'd go high class and fish for bass. Problem was we only had two plugs, a River Runt and a Lazy Ike. So we'd argue over who got to fish. One of us would fish for 15 minutes or so then it was the other's turn."

"The river was very similar to the upper part of the Buffalo, with big cliffs and big, deep holes of water. There weren't a lot of long shoals, maybe 40 yards at the most," Ross said. The water was clear.

A major chore on the farm was getting the hay crop in.

"Once that was done we'd take three or four days and camp on the river. At that point we had a wooden jon boat that we rented from some guy on the river. It must have weighed 300 pounds. Back then they'd keep the boats sunk in the river when they weren't using them so the wood would swell up. That way they wouldn't leak so bad," Ross recalled.

They'd fill the bed of a farm truck with hay and that's where the boys would sleep.

On one trip to the river, father and sons were running some catfish lines downstream from the old "Lost Bridge," which eventually washed away in a flood.

"Sure as you know it, a big thunderstorm came up and we got soaked to the bone. Dad had arranged for us to sleep on the porch of a friend's cabin that night. After we got there he built a big fire to dry out our clothes. Well, he got mine a little too dry and burned the (rear) end out of my pants," Ross said.

They had to stop at the boat rental place on the way home and Ross had on his burned-out britches. There were people around, including a few girls, when they got there.

"I spent a lot of time that day with my back up against the wall," he recalled.

Bob Anderson of Rogers saw a lot of the White River from the seat of a U.S. government pickup. He was an engineering geologist for the Army Corps of Engineers when he moved to Northwest Arkansas. Anderson was one of two men in charge of the making sure the Beaver Dam foundation was built properly.

When Anderson, now 78, moved to the area in 1961, preparations were underway to start construction, but actual building of the dam hadn't started. Upriver, crews were busy removing most of the timber from the lake bed. Tree cutting was mainly along the White River and not up the tributaries. That's why boaters today can see standing timber in Beaver Lake creek arms such as Joe's Creek, Ford's Creek, Van Winkle Hollow and others.

"They burned a lot of the trees. Others they'd put in big piles and anchor them so they wouldn't float when the lake filled," Anderson said.

Part of his job was to drive a 1956 Ford pickup from the dam along the river all the way to near Fayetteville, which would be the headwaters of the lake. One task was to look for potential leaks in the lake bed that might pose problems once the reservoir filled.

Anderson saw the new Arkansas 12 bridge being built high above the White River. The old iron bridge was hauled off piece by piece for scrap.

"There was a big hog farm where Beaver Shores (community) is now," Anderson said. A landmark in the river was what Anderson called "chimney rock." The rock stood 60 feet tall, all by itself in the river, east of what is now Beaver Shores. Beaver Lake covered the rock.

Local men were hired to move cemeteries to higher ground before the lake filled. Each crew had a government inspector to make sure the men did the work right, Anderson recalled.

His travels took him to Monte Ne in the days before the lake.

"The amphitheater that people can see now when the lake is low was in good shape," he said. "There were remains of buildings, but nothing was inhabitable."

The lake filled in about a year after the dam was finished. That's less time than a some local people guessed it would take.

"A lot of people were against the lake. They saw it messing up their fishing place," he said.

Families had to relocate. Schools and other buildings were moved to higher ground.

Anderson left the area in 1964 for other duties with the Corps of Engineers. He returned as a Beaver Lake park ranger in 1971 and came back again to be head man at the Corps' Beaver Lake office from 1979-94, with the title of resident engineer.

"People didn't see far enough ahead to see the lake's potential benefit. We've got one of the best water supplies around," he said.

It's said that Beaver Lake is the engine of the region's robust economy, an engine given life by the White River.