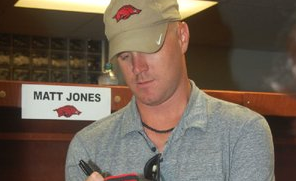 Matt Jones, former Arkansas Razorback footballer and KABZ-FM, "The Buzz" 103.7 air personality, signs a phone case for a fan during the locker room session of Football 101: Lessons for Ladies, held Aug. 13, 2013, at War Memorial Stadium in Little Rock. Sponsored by 103.7 The Buzz, the clinic has gone on for nearly a decade.

Jones’ last day was Friday, though program director Justin Acri said by phone that the former quarterback for the Arkansas Razorbacks and wide receiver for the Jacksonville Jaguars will likely make occasional visits at the radio station.

“He just wanted to get out of the daily deadline-driven grind that we’re in here in radio,” Acri said of Jones, who worked as co-host of Overtime with Trey Schaap. “We’ll hopefully get him back soon.”

Jones joined The Buzz, KABZ-FM, three years ago as host of the program, which airs from 1-4 p.m. weekdays in Little Rock as well as on the station's affiliate in Fort Smith: KHGG-FM, The Sports Hog 103.1.

Acri said he hopes to fill the vacant job within the next weeks, adding that the positions has received an "overwhelming amount of interest."