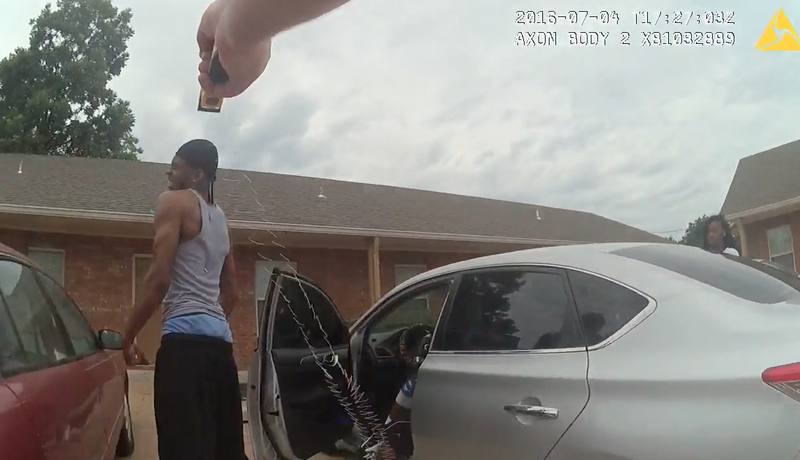 This screenshot from a body camera video shows a Blythville Police Department officer using a taser on a man. An excessive force lawsuit has been filed in the case.

In a lawsuit filed this week, a white Blytheville police officer is accused of using excessive force against a black man on the Fourth of July, including subduing him repeatedly with a taser as he lay on the ground.

Attorney James W. Harris filed the case Wednesday in Mississippi County Circuit Court on behalf of Chardrick Mitchell, who faces charges of obstruction of justice, disorderly conduct and refusal to submit to arrest.

This body camera video shows a Blythville Police Department officer using a taser on a man on July 4. An excessive force lawsuit has been filed in the case. Warning: Video contains graphic language. (By Courtesy Zach Morrison)
[View Full-Size]

The lawsuit states that on July 4, Mitchell denied his ex-girlfriend re-entry into his apartment to retrieve what she said was clothing left inside, prompting the woman to call police.

A responding officer later ordered that Mitchell allow his ex-girlfriend to get her left-behind belongings and to show his identification — requests that Mitchell “politely refused,” according to the document.

The lawsuit accuses Sigman of later using a taser when Mitchell walked toward the apartment's front door, with Sigman telling Mitchell that he was under arrest “either at the moment the [taser] was fired or just as the [taser] was striking Mr. Mitchell in the back.”

"At no time did Mr. Mitchell resist arrest, especially since he had already been [tased] when he was first told he was under arrest, even though he had at that point committed no possible criminal act," the document reads in part.

Harris said the incident was recorded on Sigman’s body camera and that a written report from police does not match the video evidence.

"I am appalled at the actions of Officer Sigman, as well as the inaction of Chief [Ross] Thompson in correcting this officer's gross misconduct," Harris said, adding that Sigman remains on the police force.

A copy of the video footage was not available Thursday afternoon, and a call to the Blytheville Police Department for comment was not immediately returned.