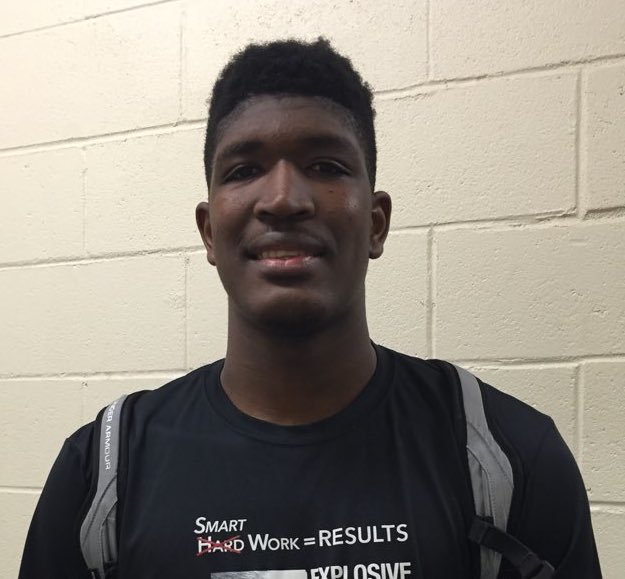 Center Kevin Samuel hasn't seen the weight room, but has the look of a guy that likes to lift.

LAS VEGAS — Center Kevin Samuel looks the part of an athlete that loves the weight room.

Standing 6-foot 10-inches and weighing 225 pounds, Samuel is one of the better looking big men in the four tournaments being held in Las Vegas this week.

“The crazy part about is he hasn’t touched a weight yet, so that’s all natural,” said All 4 Sports Dream Team Coach Orin Bailey.

Samuel, who is homeschooled and plays at Houston St Thomas Episcopal High School, confirmed the lack of a weight training.

He and Arkansas assistant T.J. Cleveland are communicating.

“Coach will normally hit me up and talk about the school and their facilities,” Samuel said.

Arkansas has a very good 2017 class going with El Dorado center Daniel Gafford, who ESPN rates the No. 10 center and No. 52 overall prospect, and guard Khalil Garland, who is rated the No. 14 small forward and No. 61 overall prospect.

Little Rock Mills small forward Darious Hall has seen his stock go up during the spring and summer and could see his name listed among the nation’s best.

Samuel is intrigued with the chance to team up with Gafford.

“That would be great have a nice backcourt and he and I in the front court,” Samuel said.

It appears a trip to Fayetteville is in the works.

Baylor, UCLA, Houston, Texas, Texas A&M, Virginia Tech ,Nebraska and Oklahoma State are some of his offers. An offer from the Hogs is a good possibility.

Bailey said Samuel has outstanding character along with being a hard worker.

“He’s still developing offensively but, he has a knack for finding the ball,” Bailey said. “He’s super athletic, high energy,and has a very soft touch and he’s still showing people what he can do offensively.”