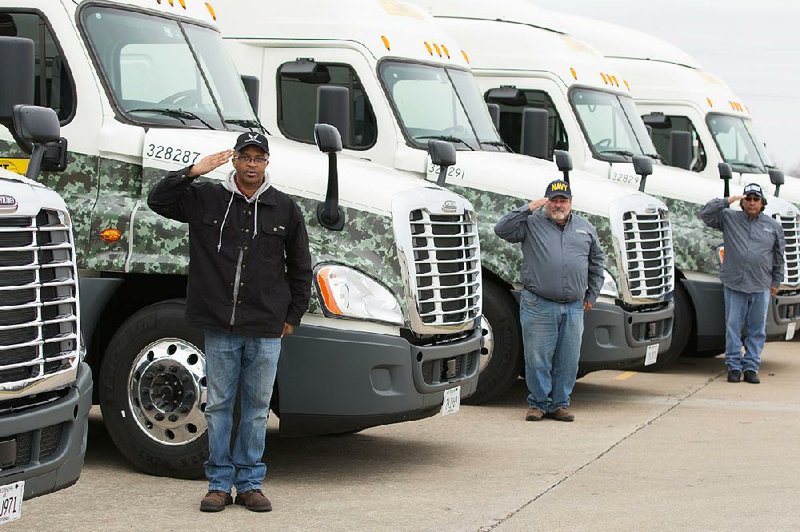 Hiring veterans is a patriotic policy in any industry, but many companies -- including the trucking industry -- have discovered it is a good business policy as well. 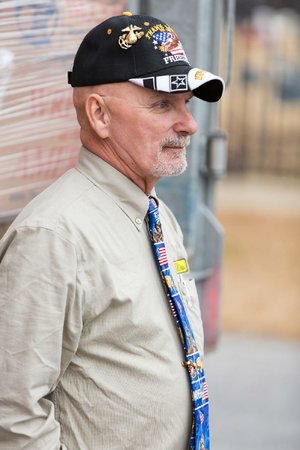 Photo by Special to the Democrat-Gazette
J.B. Hunt employee Michael Caswell wears a cap with a Marine Corps emblem. J.B. Hunt Transport Services Inc. is one of several trucking companies that are recruiting veterans.

Vaughn said that after analyzing Maverick's fleet of drivers, he found many were veterans. Veterans make up 23 percent of the Fort Smith company's employees, and Maverick regularly attends job fairs, visits bases and advertises in military publications to find more.

Maverick is not the only Arkansas trucking company to recruit veterans.

Stan Hampton, vice president for driver personnel for Lowell-based J.B. Hunt Transport Services Inc., said many ex-servicemen are "grounded in logistics," or moving people and equipment from one point to another.

"That's exactly what we need in our industry, and that's why the skills the veteran population brings to the transportation industry are in such demand. Plus, they're disciplined and committed to seeing a job through," Hampton said.

J.B. Hunt reports that about 20 percent of its employees are veterans. The company pledged in 2014 to hiring 10,000 more by 2020. J.B. Hunt representatives have traveled as far as Germany to recruit at military installations as part of the "Hunt's Heroes" initiative.

Nathan Waite, an Army veteran who drives for Stallion Transportation Group of Beebe, said he learned to pay attention to detail while he was in the military.

"Attention to detail, in layman's terms, is noticing things that other people would walk past and just not see. We have to constantly monitor our truck, inspect it and make sure everything is what it's supposed to be," Waite said. "I would also add self-discipline. It does take a lot of self-discipline to drive a truck, be on time, and get up out of bed when you're supposed to. They definitely teach you that in the military."

Given the growing driver shortage facing the industry, trucking companies are working on strategies to build the workforce. In 2015, the shortage was 48,000 and is expected to grow to 175,000 by 2024, according to the American Trucking Associations.

In June 2014, the U.S. Chamber of Commerce's Hiring Our Heroes Foundation partnered with FastPort, an organization dedicated to helping carriers solve their recruiting problems.

FastPort created a "Trucking Track" and reports having made 15,000 introductions between veterans and carriers so far. Maverick, J.B. Hunt and USA Truck are some of the many companies that joined the initiative and committed to hiring quotas of veterans.

More recently though, other industries also have caught on to the benefits of hiring veterans.

"Years ago it was us and security companies. Now everybody's there. I mean, Starbucks is there," says Vaughn of Maverick Transportation, who has been to many transitional job fairs at military installations.

"At job fairs I keep hearing more and more and more, 'Sharon, we want to hire veterans!' All industries are realizing the value they bring to any industry," she said.

Trucking companies have found many ways to target and attract veterans in their recruiting efforts. Trucking accounts for about half of the transportation companies that G.I. Jobs lists on its top 100 Military Friendly Employers.

Veterans can often apply GI Bill benefits to commercial driver's license (CDL) training school. Under certain conditions, veterans who have driving experience in the military can be exempted from the skills portion of their state's commercial driver's licence test. They can also qualify for hiring bonuses, and many companies actively work to acknowledge a veteran's service.

USA Truck recently awarded new trucks to outstanding employees who have served in the military. The trucks have customized decals of each driver's branch of service.

"All of the companies here in Arkansas are very tuned in to job opportunities for our veterans," said Steve Brantley, USA Truck's director of driver recruiting in Van Buren. "[Veterans] are used to being away from home. They're dependable. They're used to working in challenging conditions. They have a lot of career choices, so they will have thought through their decision ... meaning they are more likely to stay longer."

ABF Freight has teamed up with the Teamsters' Military Assistance Program and the U.S. military to run Class A commercial driver's license and hazardous materials training programs on three military installations. The training is free to military personnel and offered before they have finished their service. Though there is no required commitment to the company, the program has led to 137 new truck drivers for ABF Freight since it started in January 2015.

"We've found that in our competitive business, former soldiers bring highly valuable characteristics ... [such as] leadership ability and a strong sense of mission," said Bobby McClain, a veteran himself and manager of driver development and operations for ABF Freight. "In the civilian sector you don't always get that."

Larry Rhein served in the Marine Corps and has been driving for 29 years, now with FedEx, working out of Harrison. He agrees that veterans are great employees for the trucking industry.

"They're more dependable. When you have a veteran, you know they have had to show up," Rhein said. "There's that proven accountability that's unfortunately unique among younger people nowadays."

Several of these companies have military service embedded in their legacies and leadership. USA Truck founder Robert Powell was a Navy aviator, and Johnnie B. Hunt served a stint in the Army before starting J.B. Hunt. The president of Fort Smith-based ABF Freight, Tim Thorne, served in the Army as well.

The federal government also offers a Work Opportunity Tax Credit to employers who hire veterans. According to the Department of Labor, a company can lower its federal income tax liability by up to $9,600 per veteran hired.

Lance Orndorff, a disabled veteran and director of Troops to Truckers, said "CDL driving or heavy equipment certification are some of the ultimate jobs for transitioning veterans because it's only four to six weeks of training, and then they're making money to put diapers on babies."

Troops for Truckers is a service of the Veterans Resource Network that helps veterans find training and jobs in the trucking industry.

"For a veteran who is transitioning and doesn't have any civilian skills, it's an excellent opportunity," Orndorff added. "They're employed right out of school. It doesn't get much better than that."

Russell Melton Jr., who drives for Stallion, took the skills he learned from seven years of driving military vehicles while on active duty in the Army and went straight into the trucking industry. "When I wanted to start working, I typed into Google, 'trucking company veterans.'... Three days later I had a job."

"They like us because we're dedicated, and we're used to being away from home. You and your wife and children are already used to you being away from home," Melton said. He also mentioned that the pay for the trucking industry is about the same as his military pay.

"It's an advantage because my kids and my wife have a certain way of living, and I can make the same amount driving a truck."

Melton pointed out another similarity between the military and the trucking industry.

"They both have the same philosophy, which is hurry up and wait. I would say the Army teaches you a lot of patience," said Melton. "Anything can happen out here on the road; you can have protesters blocking the road for hours, and when this truck's sitting I'm not making a dime. You've got to be patient."

"If there's any job in the country that's hurry up and wait, [trucking] is it. And that's what the military is about more than anything, too. They go hand in hand, and it's already ingrained in the veteran. We learn that in boot camp. You can only go as fast as the process can go."