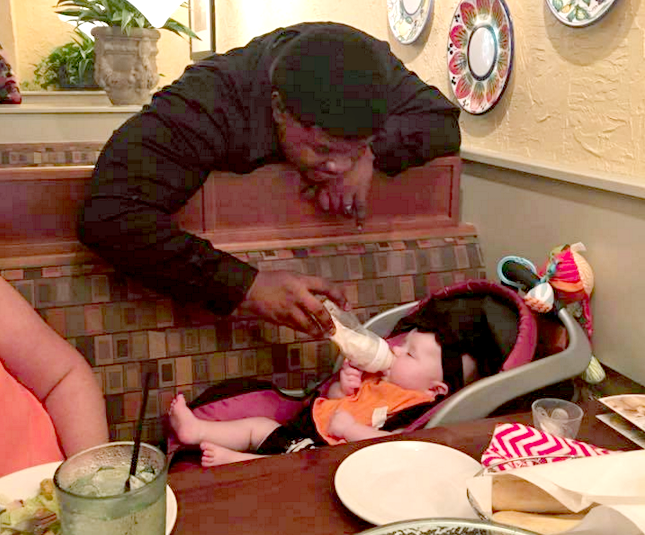 The waiter for Dallas French and her family, who a coworker identified as Robert Davis, feeds French's daughter at Olive Garden while the family took a break to eat on Thursday. The photo was picked up by the "Love What Matters" Facebook page and has been shared more than 6,500 times.

Dallas French was having a long, stressful day when she and her family stopped to eat at a Little Rock Olive Garden on Thursday afternoon before a long drive home.

But the day turned around there. The family's waiter at the restaurant on Rodney Parham Road stepped in to feed French’s baby daughter while the family ate, an act of kindness that inspired French to write a post that has since been shared more than 8,400 times from the Love What Matters Facebook page.

“I just wanted him to know that we appreciated everything he did that day,” French said. “It touched my heart.”

Her infant daughter, Ellee, had tested positive for E. coli, and French, her husband and mother-in-law had driven from Dover to Arkansas Children’s Hospital so doctors could conduct additional tests on the 4-month-old.

After the hospital visit, the family stopped at the Olive Garden. Ellee was cranky after riding two hours in the car earlier in the day and then seeing the doctor. And French was stressed, thinking about the uncertainty facing her daughter.

“[There’s] nothing like worrying about what’s wrong with your child,” she said.

The family was waiting for their breadsticks and salad appetizers when French tried to prepare a bottle for a hungry Ellee. The bottle spilled on French and the floor as their waiter brought out their food.

What followed was a much-needed pick-me-up for the family, French said. The waiter, who an Olive Garden staff member identified as Robert Davis, took a new, full bottle and said, “Here let me feed her while you eat.” He then slipped into the booth behind Ellee and leaned over to feed her.

The family was able to eat their appetizers in relative peace.

“He just stepped in and took care of us,” French said. “It was just amazing for a stressed-out mom.”

French, 36, said Ellee almost finished the whole bottle before Davis left and returned with the family’s entrees. With all the stress and worry going on that day, French wasn’t able to get Davis’ name, so she shared the Facebook post to Olive Garden’s page.

“He was precious, and I was just trying to tell him ‘thank you,’” French said.

Davis was not working Monday morning and was unavailable for comment.

“I just didn’t expect it to go as far as it did,” said French, who didn’t even know Love What Matters had posted her note. “I just wanted to say thank you to him.”

Ellee was diagnosed with stage 1 hydronephrosis, which involves the swelling of one of her kidneys and her ureter, the tube that connects her kidney and her bladder. French said Ellee will be under a doctor’s observation, and the family is hopeful she outgrows the condition.