Red Wolves vs. Hogs as unlikely as ever 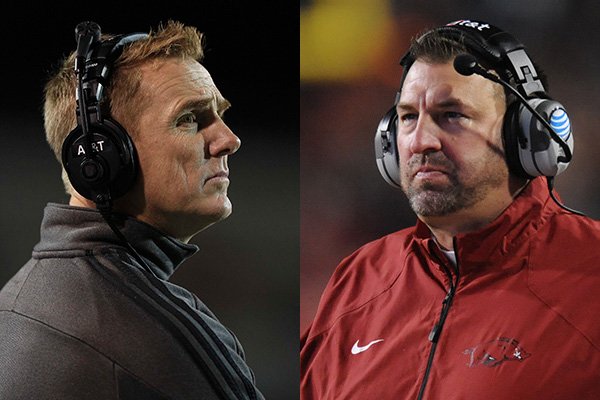 It is an ageless debate, one that comes up numerous times a year on radio talk shows, and recently it was on The Show With No Name on The Buzz, KABZ-FM, 103.7, in Little Rock.

Will Arkansas ever play Arkansas State?

It would seem the answer is always going to be no.

When John Barnhill took over as the UA's athletic director and head football coach in 1946, his plan was to make the Razorbacks the statewide team. In 1948, when War Memorial Stadium opened in Little Rock, he started scheduling multiple games each season there.

He also decided the Hogs never would play ASU. Partly for recruiting purposes, but also because to define them as a viable competitor only would decrease the fan base of the Razorbacks and the team's bank account.

Barnhill coached the Razorbacks for four years before being diagnosed with multiple sclerosis. He gave up the coaching duties but continued as the AD, hiring Otis Douglas, Bowden Wyatt and Jack Mitchell as head football coaches.

After Mitchell's third season, when he became the head coach at Kansas, Barnhill hired an aggressive 34-year-old with one year's experience as head coach, Frank Broyles, and it turned out to be a marriage made in heaven.

Broyles hired a great staff -- something he did so regularly that the Broyles Award was founded by David Bazzel to honor an outstanding assistant coach each year -- and in 19 seasons compiled a 144-58-5 record while taking the Razorbacks to 10 bowl games, and that was long before the glut of postseason games.

There were only 11 bowl games in 1975 when Broyles gave up the head coaching duties to concentrate on being the athletic director, a role he had assumed one year earlier.

There is no need to go into everything Broyles did for the UA -- including the at-the-time controversial move to the SEC, which has proven to be one of his most brilliant decisions, or that he stuck with Barnhill's theory about not playing Arkansas State.

The two haven't played and may never play, but ASU has defined itself over the years, first under Bennie Ellender, then Bull Davidson and Larry Lacewell.

More recently, the Red Wolves have had great success while going 44-21 and playing in five consecutive bowl games, so it isn't certain Arkansas State even would want to play the UA these days.

ASU Athletic Director Terry Mohajir has improved facilities and created stability in the hiring of Blake Anderson. His first three hires as head football coach were so good, they all won and left after a year for bigger jobs.

It was reported in the Democrat-Gazette in February that ASU will travel to Alabama in 2018 for the handsome sum of $1.7 million.

It always has been believed the only way the Razorbacks and Red Wolves would meet would be on financially beneficial terms for both.

There is no doubt if the Hogs were opening the season with ASU, there would be a lot more excitement about the first game, although the Razorbacks traditionally draw well for the opener.

However, if that was the season opener in Fayetteville and if a one-game ticket price of $100 was approved, that would be a total of $7.2 million in revenue, or about $3 million more than a home game against Alabama or LSU.

So writing the Red Wolves a check for $1.5 million and banking $5.7 million would seem a natural, but the long history has been it won't happen. Maybe not ever.

Print Headline: Red Wolves vs. Hogs as unlikely as ever