Latest installment is capable action-thriller, but there’s nothing new here by PIERS MARCHANT Special to the Democrat-Gazette | July 29, 2016 at 5:45 a.m. 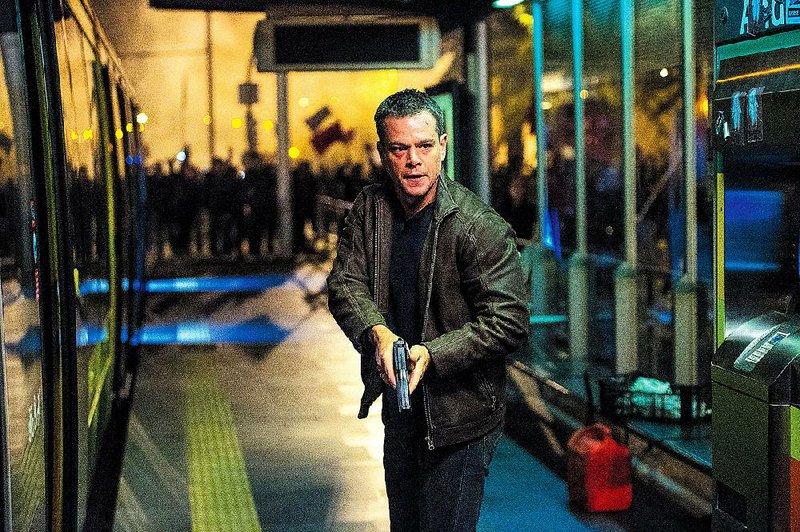 A recovered amnesiac who used to be a government operative (Matt Damon) is back for another trot around the globe in Paul Greengrass’ Jason Bourne.

Here's a conundrum for all the aspiring screenwriters in the audience: How do you take a story about a character that's essentially already been completed, and re-engage your audience with a new story about mostly the exact same thing? Whatever answer you may come up with, I can assure you the "just rehash the best bits from the original yarn and reheat the whole thing in the microwave" approach is a narrative dead end. 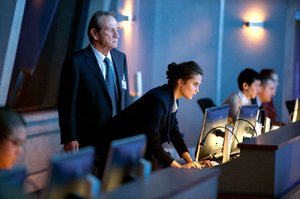 Take as evidence, this here new Jason Bourne movie. The franchise seemed to have closed its doors as the original better-than-average trilogy -- one that saw its titular protagonist go from total amnesiac with supremely advanced spy and combat skills to a complete person with a full understanding of his amoral past -- built to its harrowing climax. But after an unsuccessful reboot with The Bourne Legacy, featuring a different Bourne-esque agent (played by Jeremy Renner) failed to capture the audience, we're back to square one with Matt Damon reprising the role he last played in 2007's The Bourne Ultimatum.

Rating: PG-13, for intense sequences of violence and action, and brief strong language

The secret sauce of the first trilogy -- along with Damon's natural charisma -- was the brilliant Tony Gilroy, who wrote the screenplays (based on book characters by Robert Ludlum) and somehow crafted density and weight out of what might have otherwise been just another humdrum super-agent saga. It helped also to have as director of the last two installments Paul Greengrass, a visionary whose jumpy, hand-held style fit in perfectly with the raw immediacy of the action. The combination produced a kind of thinking man's thriller, with exotic international locations that felt genuine, and practical stunt work that was somehow outrageous yet adherent to the natural laws of physics.

In this new iteration, again directed by Greengrass but sans Gilroy, who abandoned the series after directing the failed Renner vehicle, we again find Bourne on the run from nefarious upper level CIA operatives, while seeking out even more clarity about his troubled past. Naturally, he initially does not seek out trouble, seemingly content living in Athens and making a hardscrabble living as a bare-knuckled brawler in back alley boxing circles and fight clubs, but he is drawn back into intrigue when he's approached by his old partner Nicky (Julia Stiles), who has uncovered a batch of classified CIA documents (helpfully listed in a folder titled "Black Operations"), some of which pertain to Bourne's initial recruitment, and the part his late father played in the creation of the secret program that took Bourne's identity away and turned him into a super-lethal assassin in the first place.

Naturally, Nicky's probing has alerted the swarming bees at Langley, which attracts the attention of CIA Director Dewey (Tommy Lee Jones), and his head of cyber-ops, Heather Lee (Alicia Vikander). Anxious to quell the leak -- and to finally nab Bourne once and for all -- Dewey enlists the aid of the "Asset" (Vincent Cassel), yet another unstoppable assassin with a particular grudge against Bourne, and thus ensues another cat-and-mouse game spun out over several continents.

We've all been here before with Mr. Bourne, of course. In each installment, he has essentially been trying to track down the truth of his past while some distant, conniving CIA head honcho assigns unit after unit to dispose of him. It has been a reasonably winning formula to this point, but the film -- co-written by Greengrass and Christopher Rouse, who helped edit the original installments -- is never able to truly justify its existence beyond the obvious motivation of wanting to milk the franchise for a few more dollars. There are a few real-world name drops (the initial security breach is said to be potentially "worse than Snowden"), and the now-ubiquitous dilemma of choosing between "personal rights and public safety" when it comes to the government tracking your every move in the name of security, but there's absolutely nothing here you haven't seen before.

It would seem ever-harder to "ghost" under constant surveillance of security cameras and satellite GPS trackers, but Bourne -- whose only nod to disguise is when he reluctantly dons a baseball cap -- is still somehow able to scurry about the world unfettered, dutifully going where the plot points lead him. Indeed, there's a kind of tired, bummer vibe to the proceedings, even with the Asset trailing Bourne doggedly from continent to continent. Since we see almost nothing of Bourne or the Asset's character other than their ruthless dedication to their craft, there's very little emotional investment to be had. Instead, the combatants wearily check into exotic hotels, grab their duffel bags of weapons, and head back to the rooftops to do battle, like a pair of exhausted software salesmen on an interminable international road trip.

Damon as always, is strong, but given that's he has been reprising the same dramatic arc for four films now, you can imagine how he might have lost a little interest in the character. Greengrass' celebrated action sequences are again galvanizing, but even a -- completely unnecessary -- car chase in Vegas during the film's climax just seems like a lot of noise and slash-edits of smashed-up cars for no particular reason. At one point, as Lee is reading through Bourne's case file, she comes across a psychological profile written by a doctor who investigated him. When Bourne chose to leave the service of his country, the doctor writes, "he left behind his reason to exist." Maybe the secret is, we just quietly leave him be and don't give him any other reason to grab his satchel of guns and passports again.