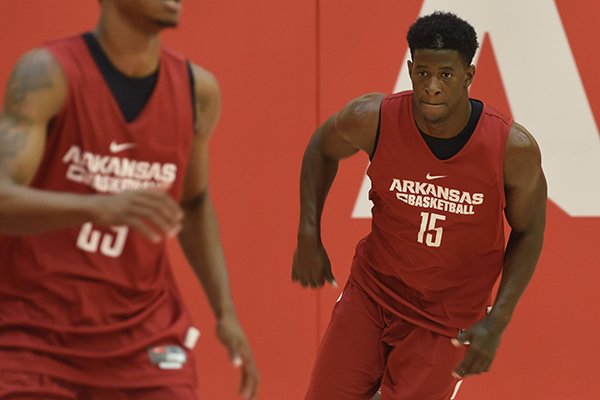 Anthlon Bell -- a career 1,100-point scorer and tops on the team in three-pointers made for four consecutive years -- and Jabril Durham -- the SEC's No. 2 assist man last season -- exhausted their eligibility. Sophomore Jimmy Whitt decided to transfer.

"I think we'll have a lot more toughness at the guard position, and depth," Watkins said. "We've got a lot of guys. When we're pressing and stuff, we've got bodies we can bring in."

Macon has seen enough in summer workouts and a couple of full-team practices -- as the Razorbacks gear up for a series of exhibitions in Spain -- to declare, "I think we've got the best backcourt in the country, if you ask me."

Only time will determine the value of Macon's claim, but the Razorbacks appear to have a more versatile and deeper set of guards. Barford and Macon arrive highly decorated, but Coach Mike Anderson doesn't want them to feel like they have to become immediate stars.

"The thing about it is, they don't have to come in here and be the saviors for our program," he said. "We've got some players here, and all they've got to do is add to it. And the more they add to it is going to make us an even more dangerous team.

"Any of the teams we've had that have been really good, our guard play has been outstanding. Adding those two guys has really strengthened our guard play."

Anderson hasn't drawn clear designations of point guards and off guards, such as was the case with Durham and Bell.

"I guess everyone's more combo, but at the same time Jabril was an awesome point guard and Anthlon was a great guard to play across from," said Hannahs, whose 16.5 points per game ranked eighth in the SEC last season. "I don't really want to compare. I know everyone I've played with has been good."

Said Watkins: "Every single one of our guys can handle the ball."

The junior college transfers come in with sterling credentials.

Barford was a first-team All-American at Motlow State (Tenn.) Community College and was ranked the No. 1 junior college transfer in the country by 247Sports.com.

Get the fastest analysis on the #Fastest40 by reading our basketball insider board.

"They're different players, but both of them are just loaded with talent," Hannahs said. "Jaylen's more of a slasher, and Daryl's a better shooter. But that's not saying Jaylen can't shoot or Daryl can't slash.

"I would just say that's each of their specialties. But they're both still polished all-around players. It's really been impressive to watch them."

Barford, a native of Jackson, Tenn., is a 6-3, 202-pounder who hopes to bring a specific skill set to the SEC.

"Just bring a little toughness, play hard and compete, have fun and try to be the best player in the country," Barford said. "I just want to help bring the team back up to the Fastest 40."

The tag line of the Anderson style, the Fastest 40 Minutes in Basketball, was not necessarily the case last season, when the loss of early entry into the NBA Draft by Michael Qualls and other issues left the backcourt lacking depth and versatility.

The current group knows Anderson is stressing a return to stronger defense.

Hannahs said he intends to play at 195 pounds, which is 7 or 8 pounds less than last season.

"I feel quicker already, and I've still got maybe 5 more pounds to lose to get where my optimal weight will be," Hannahs said. "Hopefully I'll make more of an impact on the defensive end. That's what I'm really focused on."

Macon said the energy level in the backcourt never should fall off.

"We're a lot deeper at the guard spots, and I feel like if one person gets tired, we can bring somebody off the bench and the energy level will keep going up," he said.

"We've got a lot of guards who can speed the game up the way we want to play," Watkins said. "Like Jaylen is super fast. Daryl's really fast. I'm fast. Dusty, everybody.

"We've got a lot of guys who fit the style of play we do here at Arkansas. I just think it's going to be special."