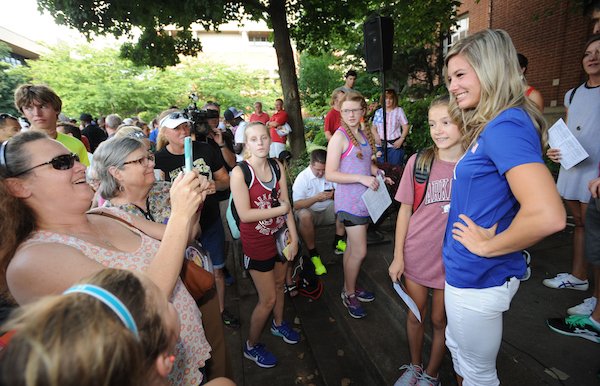 Arkansas pole vaulter and member of the US Olympics Team Lexi Weeks (right) smiles Thursday, July 28, 2016, as she poses for photographs with young fans during a celebration for Razorbacks athletes who will be participating in the upcoming Olympics in Rio de Janeiro on the Fayetteville square. Seven current and former Arkansas track and field athletes who will represent the United States, Jamaica and South Africa were joined by several former Olympians with Arkansas ties.

FAYETTEVILLE -- Lexi Weeks isn't getting a summer vacation after her freshman year at Arkansas.

It's her own fault.

Weeks, a Cabot High School graduate who won SEC and NCAA indoor and outdoor pole vault titles this year, could have taken a lengthy break from training and competition weeks ago.

LEXI WEEKS AT A GLANCE

NOTEWORTHY Cleared a personal-best 15 feet, 5 inches to take third at the U.S. Trials on July 10 and make the Olympic team. … Ranks 19th in the world this year. … Met the Olympic qualifying standard by clearing 14-9 in January in her first meet with the Razorbacks. … Trip to Rio de Janeiro will be first time she’s traveled outside the U.S. … Swept SEC and NCAA indoor and outdoor pole vault titles this year. … Set national high school record last year at 14-7½. … Twin sister, Tori, also vaults for Arkansas and was an All-American indoors, taking sixth. … Parents are Brent and Amy Weeks. … Majoring in chemistry.

QUOTE “It hasn’t quite sunk in yet. But I am an Olympian, and it sounds weird to say that. So it’s all crazy to me.”

But she's been vaulting too well.

Her college season extended into June because she qualified for the West Regional and then the NCAA Championships, where she won by clearing 14 feet, 9 inches in Eugene, Ore.

Weeks also qualified for the U.S. Olympic Trials -- something she accomplished with a 14-9 vault in her first meet at Arkansas in January -- so she was back in Eugene in July.

At the Trials, Weeks advanced to the finals and cleared a personal-best 15-5 to finish third and make the Olympic team.

Now Weeks, 19, is headed to Rio de Janeiro, where the Olympic torch will be lit at Friday's opening ceremonies to signify the beginning of the Games. She'll compete in the pole vault qualifying round Aug. 16 in hopes of advancing to the final Aug. 19.

By the time Weeks returns to Arkansas from Brazil, the fall semester of her sophomore year will have started. She'll miss the first two days of classes.

"I haven't really had an extended break this summer," Weeks said. "It's been different and tough at times, but I wouldn't have it any other way.

"Shoot, I get to go to the Olympics. I'd definitely rather do that and keep training than be going to the beach."

"When she gets down there to Rio, it's going to hit her, 'Wow, this was all worth everything I missed this summer,' " Compton said. "Competing at the Olympics is going to be something she'll remember for the rest her life."

Weeks set a national high school record as a senior at Cabot by clearing 14-7½, but she said she never could have imagined a year later she would be a U.S. Olympian.

"At first I was just in shock," she said. "I didn't expect it at all. Going into the Olympic Trials, I just wanted to make the finals, and I did that and I was happy.

"Then going into the finals, I felt good and we thought the progressions were going to be really good for me and I thought, 'There's a chance.'

"When I hit 15-3, I knew I could do it and that it was in me. But I didn't know necessarily that I would do it. Then when it happened, I was so surprised. Then to clear the next bar at 15-5 was just kind of surreal.

"It hasn't quite sunk in yet. But I am an Olympian, and it sounds weird to say that. So it's all crazy to me."

Compton, who will be in Rio de Janeiro to coach Weeks, said she's made huge strides this year in her training and technique.

"She's very good on the pole, and we cleaned up some runway stuff that we worked on a lot," he said. "She's gotten a lot stronger and a lot faster."

Compton said it's impressive how Weeks has handled such a heavy workload of practices and meets.

"She's had a really long season for a 19-year-old," he said. "She's going to have to jump off adrenaline now.

"The technique's there, she knows how to pole vault, but what's going to have to carry her down the runway is adrenaline.

"We saw what adrenaline did for her at the Olympic Trials, and she's going to need that again to make the Olympic finals."

Weeks said she owes a lot of her success to Morry Sanders, who coached her in high school, but that it's been beneficial to focus on the pole vault at Arkansas after competing in several events for Cabot.

"I didn't think I'd be jumping 15-5 this year, but coach Compton knows how to develop athletes," she said. "I'm thankful to be coached by him."

Sandi Morris, who won the NCAA indoor pole vault title as an Arkansas senior in 2015 and finished second at the U.S. Trials, said she wasn't surprised Weeks made the Olympic team.

"I knew she was going to step up and do it because she knows how to compete," Morris said. "Coach Compton really makes us tough competitors."

Morris said Weeks also benefited from having a relaxed approach.

"Going into it, she was the underdog," Morris said. "There were a lot of other girls who were under a lot of pressure to make the team, and she was just out there smiling and having a good time.

"But she didn't just end up on the team. She jumped her way onto that team."

Going to the Olympics will be the first time Weeks has traveled abroad.

"Lexi one day can tell her kids and grandkids her first time out of the country was to the Olympics," Compton said. "That's pretty special."

Weeks will travel with Morris, the American record-holder who has been around the world the past several months competing as a professional. Last year, Morris finished fourth at the World Outdoor Championships in Beijing.

Morris and Weeks will fly to Rio de Janeiro on Wednesday so they can take part in the opening ceremonies Friday.

"I'm thankful that Sandi is going to be there to help me go through it all," Weeks said. "She knows the ropes. I'd be a lost puppy without her."

Morris, 24, said she's gotten closer to Weeks as they've had more practices together.

"We're really far apart in age -- I've graduated and she was just a freshman this year -- so I didn't really know her on a personal level," Morris said. "But over the last few weeks we've spent a lot of time together, just me and her training out here with coach Compton. We've developed a bond, and I think it's been really good for both of us. We push each other."

Weeks said being on the same Olympic team as Morris makes the experience better.

"She's been such a good leader to me," Weeks said. "So kind and supportive through this whole experience."

Weeks returned to Cabot for a few days after the Olympic Trials even though she didn't get an extended summer vacation.

"I did work out a little bit, but it was nice to go home and see my family," she said. "We had some time to celebrate, because they weren't able to go to Oregon for the Trials.

"Then it was time to get back up to Fayetteville so I could train for the Olympics."

Compton has cut back on Weeks' work in recent practices to make sure she's as rested as possible without losing any conditioning or technique.

"I don't put more on her than she can handle," Compton said. "Everything is light and short. I've done this a long time, and we're doing just enough to stay sharp."

Weeks said she has no doubt she has a few more big vaults in her for the Olympics.

"It's definitely been a long season, but I feel good," she said. "I'll be ready to go."