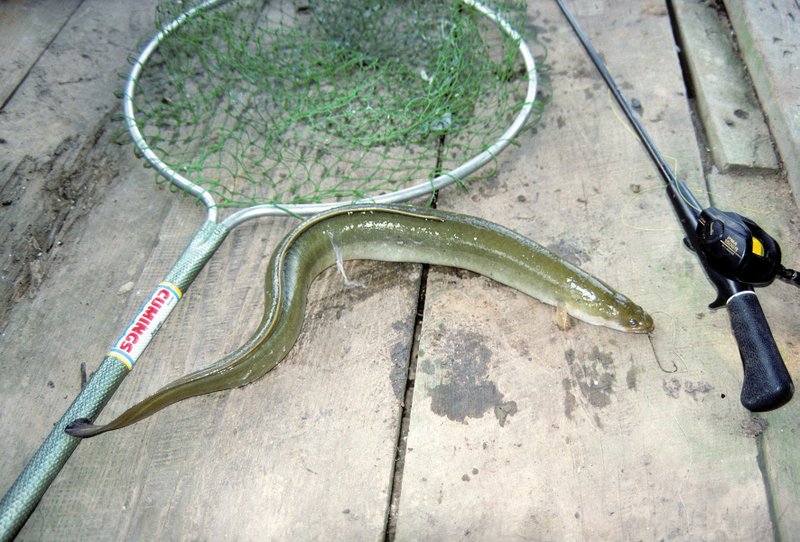 Author Keith Sutton of Alexander caught this American eel while catfishing on the lower White River in southeast Arkansas.

I recently watched a man fishing in the Arkansas River at Little Rock who caught an American eel. When he set the hook, the angler was pleased with the reaction. The fish surged away, stripping line against the drag. The man grunted and cranked, smiling all the while.

When the 2 1/2-foot fish was finally beached, the man’s demeanor abruptly changed. I doubt he could have been more horror-stricken had he landed a 20-foot anaconda. He dropped his rod, ran to his pickup, extracted a .357 revolver and proceeded to plug

When the gun was empty, he smiled again, turned to me and said matter of factly, “I hate @#$+& eels.”

I decided not to share my penchant for a delicately herbed anguille au verte.

The eel’s long, snakelike body gives folks reason for pause. Beady eyes punctuate a small pointed cranium. The eel’s underlip protrudes in a perpetual pout, and the slug-colored hide is ensconced with thick, snotty mucous. Hold a bass in one hand and an eel in the other, and it’s hard to believe they’re both fish.

Despite their repugnant appearance, however, eels are delectable and worthy opponents on rod and reel. Catch-and-release (or catch-and-run-away) may have been invented by anglers who caught eels by mistake, but among families of Old World origin, no Christmas is complete without eels for the table. This winter specialty keeps thousands of commercial fishermen at work netting tons of live eels to sell in Boston, Chicago and

Eels can be caught in Arkansas waters, too, but they are sporadic in occurrence and not commercially important. The species is most common in larger rivers like the Arkansas, Mississippi, White, Ouachita and Red.

For 23 centuries, man speculated on the origin of the eel. Aristotle was convinced that eels rose spontaneously from mud. Roman scholar Pliny the Elder believed young eels came from bits of skin adults rubbed off on rocks. Scandinavians postulated that another fish, the Aalmutter, was the “eel mother,” while Italian fishermen espoused the idea that eels copulated with water snakes. In early America, it was generally assumed that eels arose spontaneously from horse hairs that fell in the water. These whimsical notions had support until 1924, when scientists discovered facts as astounding as the age-old

Adult American eels leave our coasts, from the Gulf of St. Lawrence to the Gulf of Mexico, and migrate to the open sea to spawn. Spawning was once thought to occur in the Sargasso Sea between Bermuda and the Bahamas, but more recent evidence suggests breeding grounds are much farther south. European eels, which are very much like American eels, spawn in proximity to their cousins, a one-way migration spanning three years and 5,000 miles. The young of each species disperse in

The spawning is cloaked in mystery; no one has ever witnessed it. Another unsolved mystery is what happens to adult eels after they leave our rivers. No adult eel has ever been taken in the open ocean. The spawning site was determined solely through

Floating eggs hatch into “leptocephalus” larvae so unlike adults that they once were thought to be another species. Tiny and leaf-shaped, they are so transparent, print can be read through their bodies. They drift with the Gulf Stream, arriving at our coast in a year. At this time, their

resemblance to adult eels is unmistakable, and they are called “glass eels” or “elvers.”

Male eels remain in brackish or fresh water near river mouths. Females ascend rivers for hundreds of miles and are known to move overland on rainy nights around low falls and dams. Though sporadic in occurrence, they’re found in nearly every state east of the Continental Divide. They hide by day in the cover of deep pools and feed at night on fish, crayfish and invertebrates, live and dead.

Males average 12 to 18 inches long. Females reach 52 inches and exceed 7 pounds, though the average is much smaller. The all-tackle world-record is an 8-pounder from New York.

Sometime between age 5 and 20, females migrate downstream. They and the mature males change from olive green to silver, cease feeding and move out to sea. When offshore, they disappear over the Continental Shelf. Like Pacific salmon, they die after spawning, and almost miraculously, the minute larvae find their way back to the shores of their ancestors.

Fishing for eels can be as strange as the fish themselves. Rob Buffler in the book Fishing for Buffalo reports, “Because eels sometimes actually leave the water and crawl up on land, they are the only fish (except walking catfish) that can be caught by casting away from the water. … Eels feed on worms in low-lying areas, so we key in on these spots, casting to places on land where an eel might hold.”

In Virginia Wildlife, Jack Randolph described another unusual fishing technique — bobbing for eels — that requires no hook. “One by one, the night crawlers are threaded on fine sewing thread by running the needle completely through the worm from one end to the other,” he wrote. “When you [have] about 6 feet worth of worms, you wrap them into a ball and tie the ball with stout line. The line, about a cane pole length, is tied to the tip of a cane pole and you are ready to fish. In theory the eel grabs the bob and the thread becomes entangled in its teeth.”

In extremely cold areas, eels lie in mud during winter. In some states, they can be taken by probing repeatedly the mud of river bottoms with a gig.

Most eels are caught using more conventional fishing techniques. Rig as you would when bottom-fishing for catfish, bait your hook with a gob of night crawlers, a crayfish or a minnow, then let your rig swing tight in the current. Even at night, when most eels are caught, you’ll have no trouble detecting a strike. Eels hit hard and fight like much

To deslime a live eel, place it in a container of coarse salt. To remove the skin, nail the head to a board or secure it with a loop of cord, cut a ring around the head with a knife; then use pliers to skin it like a catfish.

Or try the method Greg Gosik of Highland Springs, Virginia, said his grandfather taught him: “Just cut a ring around the head, peel just a small part back (1/2 inch), take a piece of strong paper like grocery-bag paper, and wrap it on the eel at the cut. Hold the head in one hand, and pull the paper and skin with the other. Comes off easy.”

Eels have a delicate texture and full flavor. They’re excellent smoked, grilled, fried, baked and in soups. One simple way to cook eels is to fillet the meat, boil for 30 minutes, drain, season with salt and pepper, then dip in beaten eggs and roll in bread crumbs. Fry for five minutes, then serve with hot spaghetti sauce poured on top.

We won’t pretend the American eel isn’t one of the strangest fish swimming in Natural State waters. But like the old saying goes, “You can’t judge a book by its cover.” Don’t overlook the fine sporting

and culinary qualities of this, one of Arkansas’ most unusual and neglected fish.