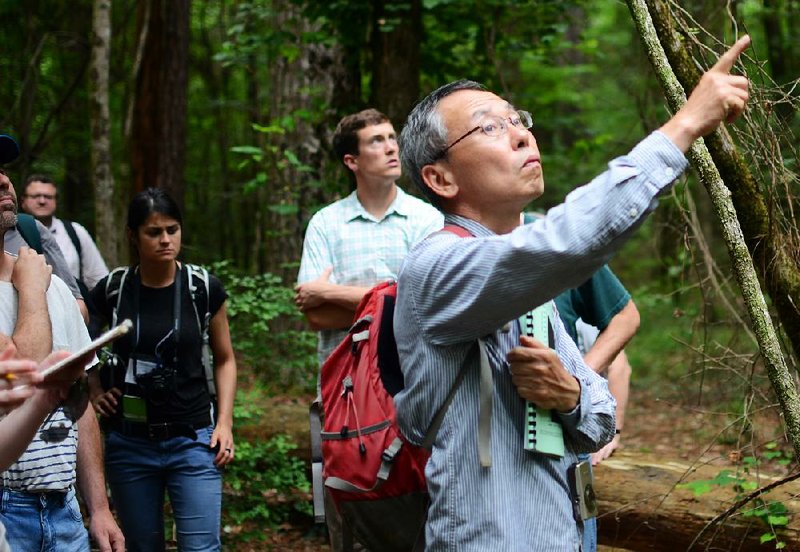 Hiromi Mizunaga, a forestry scientist from Shizuoka University in Japan, points to an opening amid the trees Wednesday during a tour of the U.S. Forest Service’s experimental forest in Crossett.

Dozens of the world's leading forestry scientists, hailing from places as far as Japan, Brazil and Slovenia, paid a visit to the small town of Crossett in southern Arkansas to learn about forest management techniques.

Crossett, known as "the forestry capital of the South," is home to one of the first experimental forests for loblolly and shortleaf pines.

"This is one of the holy places of Southern forestry," said James Guldin, a research ecologist at the Southern Research Station in Crossett, an operation of the federal Department of Agriculture's U.S. Forest Service.

Forestry scientists met in Little Rock for a conference of the International Union of Forest Research Organizations this week. This group of scientists specializes in forest management and meets every two years to present research. On Wednesday, the scientists toured the experimental forest at the Crossett research station.

Two areas of the forest, the Good Forty and Poor Forty, are managed using uneven-aged cutting as opposed to clear-cutting. Foresters select the trees they want to cut each year on the basis of location, age and size.

"This way of treating the forest makes it easy to run tests," said Andreas Zingg of the Swiss Federal Institute for Forest, Snow and Landscape Research.

With 80 years of documentation, scientists can tweak the conditions in the Poor and Good 40s to see how the forest responds.

Sometimes nature tweaks the conditions for them.

Last spring, burning brush from a controlled fire on one side of the forest traveled across a road and set 20 acres ablaze.

"At first I was upset, but in hindsight it has been amazing to see how it's changed the forest," Guldin said. "Though I haven't quite worked up the courage yet, part of me wants to call the fire department and have them burn the whole thing."

The growth rate of the forest has dropped over the past 10 years. The forest is scheduled for a thinning, but Guldin said he's going to wait because the growth isn't mature enough yet.

"Things aren't growing the way they used to, and we have no idea why," Guldin said.

It's also becoming more difficult to cut the trees. Traditionally, the forest is cut using chain saws and a few workers.

"The insurance companies don't like us doing that anymore," Guldin said. "They'd rather us use mechanized harvesting techniques, but our trails aren't built to fit heavy machinery."

As the price of harvesting is rising, the price of pine lumber is falling. In 2002 the forest could get $80 for a ton of cut material. Today the going rate is $30.

"Unfortunately, the bottom has dropped out of the high-quality saw market in the South," said Don Bragg, a research forester at the Southern Research Station in Crossett.

Despite these challenges, Bragg said the forest is self-sustaining and he doesn't see that changing anytime soon.

In contrast to the careful pruning done to the Good and Poor 40 areas, foresters left the Reynolds Research Natural Area untouched since 1920. If left alone, it is likely all of the forest's pine trees will die out in 80 years.

Without humans cutting mature trees to let in light and space for saplings, the forest has not been able to regenerate young pines. Without controlled burning, the forest floor has grown too thick for saplings to break through even in places where there is enough light. The mature trees are reaching the end of their life spans, and some are already starting to die out.

"In 80 or 100 years all of this could be covered in maple or oak, or, with how invasive species are coming over here, it could be filled with trees from Japan," Bragg said.

Geraint Richards, the head forester for the estate of Britain's' Prince Charles, said it is important for forestry scientists from across the globe to work together.

"I've learned that a lot of issues we face as foresters, although we work in different climates with different species and different needs, are the same," Richards said. "These forests in Arkansas are full of ideas we can apply in the U.K. and to forests everywhere."