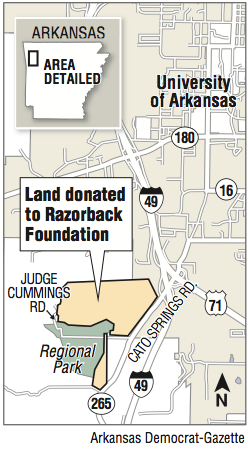 A map showing land donated to the Razorback Foundation.

FAYETTEVILLE -- A sleepy piece of land in southwest Fayetteville that once sparked development dreams now borders a site humming with heavy machinery and construction.

Fayetteville city leaders promise that work noise will soon be replaced with the cheers of families gathered at its new Regional Park, a 200-acre site transforming into a place of several lighted ball fields and park amenities, like restrooms and concession buildings.

Next-door, silence reigns. The Razorback Foundation, a public charity that supports University of Arkansas at Fayetteville athletics, took control in January 2015 of about 256 acres adjacent to the park. The property, west of South Cato Springs Road and near the Interstate 49 intersection, was a gift from Dallas Cowboys owner Jerry Jones and his wife, Gene.

The foundation declined to comment about plans for the land, as they did when the gift was announced. But with an $8.7 million "fair market value" reported by the foundation last month to the Internal Revenue Service, the mostly undeveloped land once again may be viewed by some as a destination for commercial or residential development.

"I think it's inevitable that this side of town will be built out," said Jeff Pederson, senior vice president for commercial real estate with Lindsey & Associates, the Northwest Arkansas real estate firm with a ubiquitous presence in the region.

Yet, recent site history shows how once-touted land can remain undeveloped for years, despite bullish valuations or even city-approved plans. Differing views may exist for property in the area, and the mission of the Razorback Foundation, with its ties to UA, adds a further wrinkle to how development may proceed.

Pederson said he has no involvement with the 256 acres the Razorback Foundation owns. He represents the owner of a tract for sale nearby, about 95 acres east of South Cato Springs Road near I-49. The slice of property, which fronts the interstate, has an asking price of about $14 million, he said.

The park will soon add value to the neighborhood, Pederson said.

"I don't think you can overstate the importance that's going to have in that area," he said.

In the recent past, however, others with grand plans for the area have seen their efforts fall short. In 2010, Chambers Bank took ownership of land that included the area now controlled by the Razorback Foundation.

The bank did so after an aborted commercial and residential development project known as SouthPass. (That same year, the bank donated 200 acres to the city for the Regional Park, fulfilling an earlier promise made by SouthPass developers.)

Not long after, UA became interested in a portion of the site, commissioning an appraisal done in 2012 for the "Cummings Farm" area.

"When the City of Fayetteville was looking to develop a regional park in the area, the university looked at adjacent land as a potential for intramural fields but we did not move forward with that," UA spokesman Mark Rushing wrote in an email, adding that the university instead purchased land in another part of the city.

On Dec. 30, 2014, Jerry Jones, who was a Razorback football player in the 1960s, purchased from Chambers Bank a section of land that included the general Cummings Farm site. The purchase price was about $7.3 million, according to a land deed with that date.

The land, which was quickly donated to the Razorback Foundation, has different borders than the Cummings Farm site appraised in 2012. It's more than twice the size and includes more frontage along South Cato Springs Road.

Bruce Hopkins, a professor at the University of Kansas School of Law, said federal tax law requires that the donor of a land gift obtain an independent, qualified appraisal to claim a tax deduction. The law does not require the nonprofit receiving the gift to do the same, Hopkins said, but such organizations "should do the same, to properly book the land's value."

Hopkins added that if the property is sold by a public charity like the foundation within three years of receiving the gift, the sale information must be reported to the IRS.

"The IRS is in a position to compare the selling price of the property with the value the donor selected in taking the deduction," Hopkins said.

In 2012, two years before the Jones purchase, the Cummings Farm appraisal -- put together by Belote & Associates -- included no remarks about the planned Regional Park. It described a sparsely developed neighborhood -- "approximately 20% built up" -- and predicted that "overall property values should slowly increase with continued population growth over the next 5 to 10 years."

Any future large-scale development, just as with the proposed SouthPass development, likely will have input from the city as long as the university does not directly own the land. Jeremy Pate, Fayetteville's development services director, explained that land controlled by the Razorback Foundation must go through the city's normal review and permitting process, unlike projects done on university-owned land.

The official owner of the land, Cato Springs Road LLC, is directly controlled by the foundation, according to the organization's tax return.

Of the approximately 95-acre tract Pederson's involved with, "we haven't had a whole lot of interest," he said, describing how a commercial park or shopping development would fit the site. The plan is to "wait until the market catches up with that," he said, adding that there's no timeline for when that might happen.

"When someone with a plan and the money makes a proposal that's acceptable, that's when it will all happen," he said.