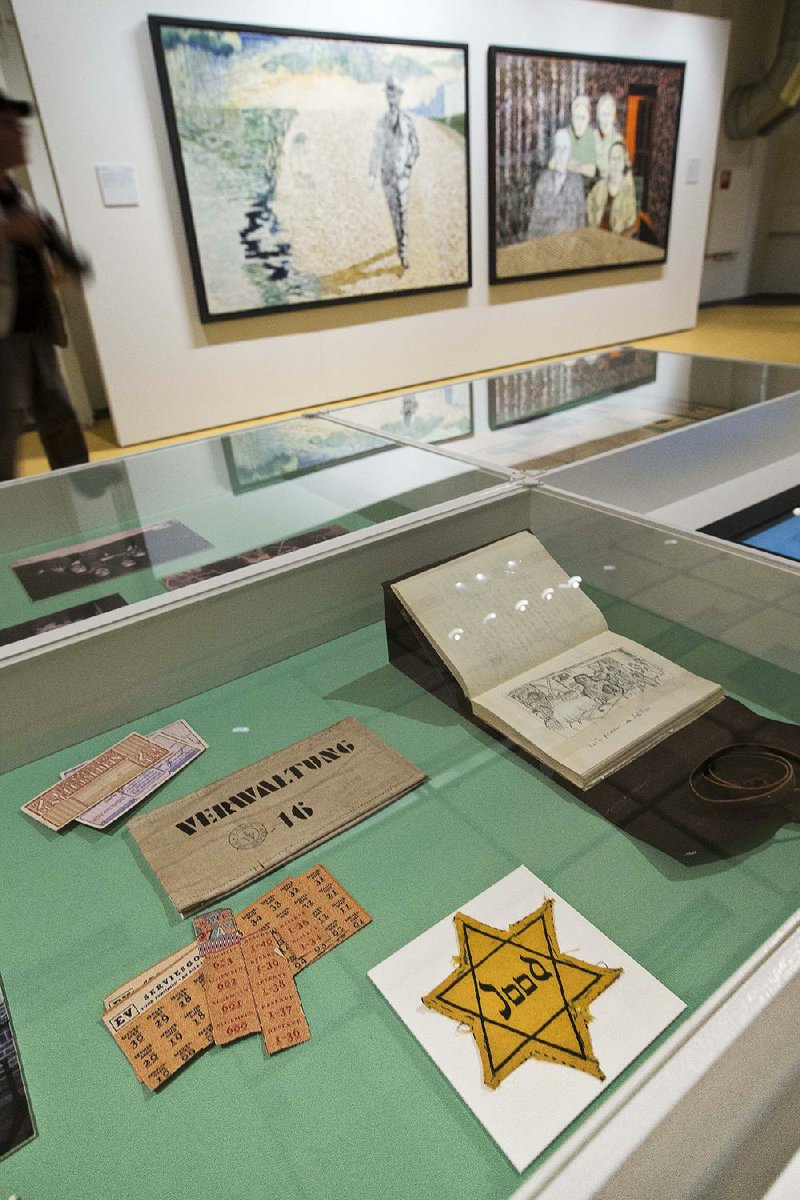 The Jewish star badge worn by the grandmother of Dutch actor and artist Jeroen Krabbe is displayed along with other items and some of Krabbe’s paintings at the National Holocaust Museum in Amsterdam.

AMSTERDAM -- More than 70 years after tens of thousands of Dutch Jews were deported and killed by the Nazis, the Netherlands is finally getting a national Holocaust museum.

It will be three years before the new museum is completed, but last month it opened its doors to host a harrowing exhibition of paintings by actor and artist Jeroen Krabbe.

The location of the museum, a former teacher training school in the heart of Amsterdam's old Jewish quarter, is a small but hugely significant ray of light in the dark history of Jews in the Dutch capital during World War II.

Some 600 Jewish children were spirited to safety via the school from a neighboring kindergarten where they were being held while awaiting deportation, said curator Annemiek Gringold. On the other side of the street stands the Hollandsche Schouwburg, a theater used by the Nazi occupiers as a gathering point for Jews who were rounded up -- often with the help of Dutch collaborators paid a bounty for each person they betrayed -- and transported to their deaths.

In all, 104,000 Dutch Jews were among the 6 million Jews murdered in the Holocaust. The theater is now home to a memorial to those victims.

The nine paintings on show are collectively titled "The Demise of Abraham Reiss." They trace the life of Krabbe's grandfather, who was murdered by the Nazis in 1943 in the Sobibor death camp in occupied Poland.

From a man sitting in a forest of birch trees on the edge of Amsterdam, the paintings trace Reiss' life in pre-war Amsterdam to his detention in the Westerbork camp in the northeastern Netherlands and his arrival at Sobibor, where he was greeted by a snarling dog and shadowy, faceless guards. The final painting shows thick smoke billowing out of the chimney of Sobibor's gas chamber and a flock of geese, whose honking was intended to drown out the screams of Jews being murdered, according to a text accompanying one of the paintings.

The artist said he couldn't bring himself to visit Sobibor. So instead he drew on the memories of camp survivor Jules Schelvis, who wrote a book about his experiences and built models of the camp and its gas chambers. The models are exhibited in the same room as Krabbe's paintings.

Krabbe said he also used his acting skills to imagine how his grandfather would respond to the horrors unfolding in his life.

"I wanted to get under his skin," Krabbe told The Associated Press. "To imagine how it would be to experience what happened to him and how he would have reacted. It was like I had to play a role."

The holocaust museum will stand among other institutions in the Netherlands charting the history of Jews and their killings during World War II, including Amsterdam's Anne Frank House.

Gringold said the holocaust museum will shine a light on other victims.

Tickets are 15 euros ($17) and also give access to a group of museums and other sites in the Jewish Cultural Quarter. The holocaust museum is at No. 27, Plantage Middenlaan in Amsterdam. Tram lines 9 and 14 stop nearby. Get off at the stop called Artis.