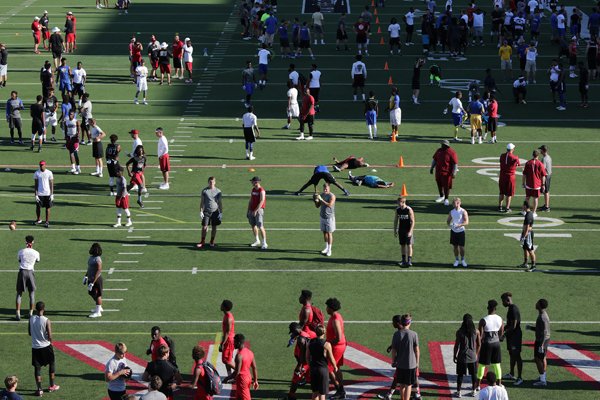 Players warm up before the start of the All Arkansas satellite camp Sunday, June 5, 2016, at War Memorial Stadium in Little Rock.

No one knows for certain what the future holds for summer football camps, particularly out-of-state "satellite" camps, but on a warm Sunday evening in central Arkansas the blend of colors from 12 coaching staffs and dozens of high schools on the turf at War Memorial Stadium had a Natural State feel to it.

Arkansas Coach Bret Bielema and the Razorback coaching staff showed up in full force at the first All-Arkansas camp.

Bielema said the motivations are a little different for each school, but he said there's value for himself and the Razorbacks.

"Just to promote our game, to promote War Memorial, to promote Arkansas, those are all positives, Bielema said. "It's good for my coaches too. I brought all my grad assistants. ... To see them work with the guys one on one will be good.

"Obviously when we agreed to do this, I knew the prospects we were going to have our eyes on were going to be a limited number. It does give us a different area, a different location to come over and see some kids that could have a hard time getting to Northwest Arkansas. I think there'll be some underclassmen involved."

Asked if he would be open to participating in an All-Arkansas camp on a yearly basis, Bielema said, "There's a lot of things that can happen in a year.

"I mean, I think it' a great thing. I don't see any reason why we wouldn't, especially because we spend a lot of time over here. There's good players in this direction, and again, to promote the sport. It's hard to forecast the future, but I can't see any reason why something like this wouldn't be a part of what we're doing."

Bielema and staff members are heading out to camps in Houston, Atlanta and Tampa, as well as their own camps, in the next few weeks.

Bielema said satellite camps were discussed at the SEC meetings last week in Destin, Fla. He and his staff had planned to be at camps in New Orleans and Arlington, Texas, that were eventually not held to due in-state pressures.

"I get it," he said. "I made reference to it when I was at the SEC meetings, that in that room that SEC is very competitive and ... to have a venue or an opportunity to come into Texas and to come into Louisiana, I was going to be very shocked it if happened easily, so I wasn't shocked when it didn't happen."

Bielema said it was great to catch up with other coaches he's competed against over the years, such as Arkansas Tech Coach Raymond Monica, who was defensive coordinator for eight seasons at Temple.

Bielema said a lot of interesting issues were discussed at the Destin meetings.

"Satellite camps are a huge deal, the use of technology in the future, recruiting overall -- whether we're going to have an early signing period or not," he said. "They've now added the rule where you can fly a parent in for an official visit and that's ... for you guys that follow recruiting ... that is like huge. That's a big deal.

"There was a lot of really good stuff. Some times it takes two or three years to come to full effect, but it is always entertaining, believe me."

One of Bielema's pet projects -- establishing a mechanism for underclassmen who do not get selected in the NFL Draft to return to school -- was brought up at the meetings as well.

Bielema said cornerback Britto Tutt of Ventura (Calif.) College is the only signee who has not reported to campus, but he'll make it for the second sumer session. He also said cornerback Cornelius Floyd, who has regained his academic eligibility, has been reinstated to the football program.