Key tells Little Rock panel to be visionary for schools 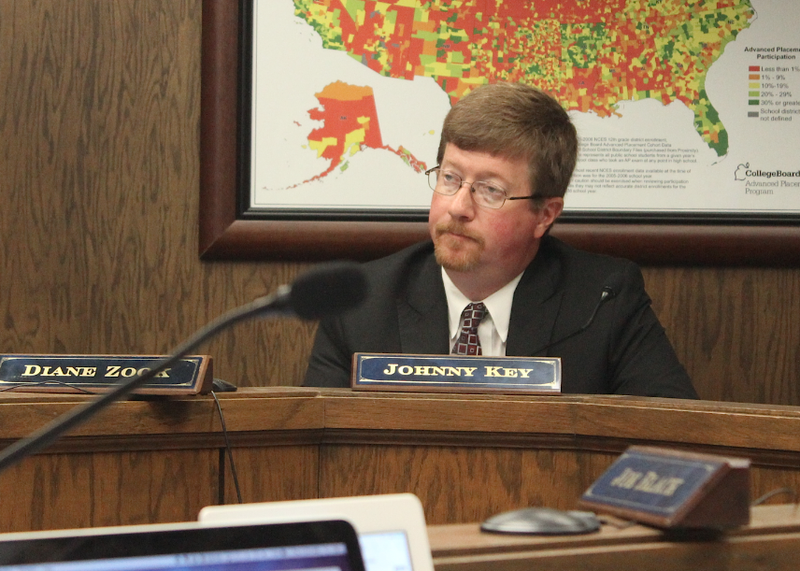 Education Commissioner Johnny Key looks on during a state Board of Education meeting Thursday, Aug. 13, 2015.

"In your work, think about what you want the schools of Little Rock and Pulaski County to look like 20 years from now as far as delivery and quality in what they are providing," Key told the seven-member Little Rock Area Public Education Stakeholder Group at its first meeting.

"Without a strong, collaborative public education system in the capital city, our state will be limited in its growth and ability to move forward," he said, adding that the committee "can have a great bearing" on countering that.

"I really believe that in 20 years they are going to write books about the miracle in education in Arkansas, and the work you all are doing for Little Rock and for the area south of the [Arkansas] river will be a whole chapter, maybe two," he said.

The committee is the result of an Arkansas Board of Education decision in April to hire a "research facilitator" to make recommendations on how the board might better manage decision-making and communication in a way that will increase collaboration and coordination among traditional public schools and independently operated, publicly funded charter schools.

The Education Board's call for guidance on how to generate cooperation among the different kinds of schools came after heated debate earlier this year over requests by the existing eStem and LISA Academy charter schools to open new campuses within the boundaries of the Little Rock School District.

The charter school operators said the new schools were needed to help relieve long waiting lists of students wanting to enroll in the schools. District leaders argued that the charter school expansions -- which were ultimately approved -- will draw higher achieving, more affluent students, leaving the traditional schools with greater percentages of students with more difficult educational needs and fewer resources to educate them.

In addition to bringing in a consultant, that Education Board action in April also called for the formation of a small stakeholder group of individuals representing the different kinds of public schools and the Little Rock-area community as a prerequisite to hiring the researcher or consultant.

The stakeholder group -- appointed by Key and Education Board Chairman Toyce Newton of Crossett -- is to identify data questions, define key terms and set measurement parameters for the consultant. The members include Tommy Branch, a former Little Rock School Board member who works for the Division of Youth Services in the state Department of Human Services, who was selected Monday as the committee's chairman. Other members are Tamika Edwards, Ann Brown Marshall, Jim McKenzie, Antwan Phillips, Leticia Reta and Dianna Varady.

The consultant is to address how the state can:

• Provide access to an achieving school for every student.

• Meet the needs of a diverse student population.

• Make the delivery of education cost-effective and efficient.

• Respond to patterns of charter school selection that result in the concentration of students with certain characteristics in the schools.

• Modernize and situate school facilities across the area in light of current and future demographics.

• Promote collaboration between traditional public and open enrollment charter schools to maximize achievement of students and financial efficiency in public education south of the Arkansas River.

Airola said one of the first tasks of the committee is to determine the definition of an "achieving school," adding that the phrase in recent years has been very narrowly defined by the federal No Child Left Behind Act.

An achieving school under that act was one in which there was an annual increase in the percentage of students scoring at proficient or better on state math and literacy exams. The No Child Left Behind Act has been replaced with the Every Student Succeeds Act, which was passed last year by Congress and signed by President Barack Obama.

Edwards, a committee member and director of governmental affairs for Arkansas Advocates for Children and Families, questioned whether the committee's advice on a definition for an achieving school would be overruled by the federal government definition.

Key said that the new law gives states the authority to establish their own school accountability systems and that the committee's work will likely have great merit and contribute to the state's broader efforts to develop that statewide system of evaluating school performance. He also suggested that the committee use the term "quality schools" that has a broader connotation in place of the "achieving" schools with its historically narrow meaning.

Airola said that if the committee starts with a definition of a high-quality school, then that can lead to investigations and determinations about the differences among schools and research into why there are those differences that are based on data and not assumptions.

"I'm real interested in not duplicating your work, not ignoring your work and not being ignorant of your work," Marshall said. "Tell us what you know."

McKenzie, a committee member and the executive director of the Metroplan inter-agency planning council, asked Key and Airola for a "little Education 101" in the form of briefing papers on education terms and charter school history. He also requested that the committee hear presentations at its next meeting, June 29, from Little Rock Superintendent Baker Kurrus, incoming Little Rock Superintendent Michael Poore, Pulaski County Special School District Superintendent Jerry Guess and from a representative group of charter school leaders.

"I feel like I've been dropped into a pot that is in full boil," said McKenzie, who attended Little Rock district schools until his family moved him to Fort Smith Southside High for his senior year of high school.

The stakeholder group is set to meet again June 29, July 11 and July 25. Future meeting dates and a timeline for completing the work have not been set.

The group's meetings are open to the public. Each session is to be live-streamed, recorded and posted on the state Education Department website, arkansased.gov.