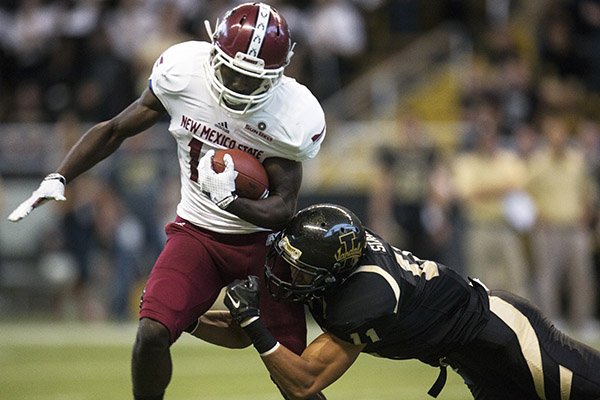 FAYETTEVILLE -- The nonconference game Arkansas has contracted for 2017 with New Mexico State will cost the athletic department big bucks.

The payout is believed to be a record for Arkansas, topping the $1 million guarantee it paid Toledo last season for a game the Rockets won 16-12 in Little Rock. The Razorbacks do not release game guarantees in public records requests, citing an exemption in the state's Freedom of Information Act that protects competitive advantages.

New Mexico State's athletic department is strapped for cash, with the Sun-News recently reporting the Aggies had to cut about $424,800 from their operating budget based on a ticket revenue shortfall, a reduction in student fees and other factors. New Mexico State is being paid $800,000 by Arizona State for its season opener Sept. 2, 2017, according to the newspaper. The Aggies final season in the Sun Belt is in 2017, and after that they will compete as an independent.

Arkansas will open the season at Reynolds Razorback Stadium against Louisiana Tech with a 3 p.m. kickoff on the SEC Network on Sept. 3, the SEC office announced Tuesday.

The league announced the broadcast schedule for the full slate of SEC games for the first three weeks of the season, as well as the LSU-Texas A&M game set for Thanksgiving Day.

The Razorbacks' marquee road game at TCU on Sept. 10 previously had been announced as a 6 p.m. kickoff on either ESPN or ESPN2. Arkansas will host Texas State at 7:30 p.m. at Razorback Stadium on Sept. 17, with the game to be shown on the SEC Network Alternate.

Arkansas is parlaying a 2016 home schedule with several household names on it into a big summer for season ticket sales.

Chris Freet, a senior associate athletic director, touted Tuesday on Twitter that primary single-game tickets for Razorbacks' home games against Alabama and LSU are sold out after Razorback Foundation donors were given priority access to tickets Monday. He told the Arkansas Democrat-Gazette and WholeHogSports.com that Arkansas has sold 50,102 season tickets, up from 47,303 sold last year.

Less than 600 tickets remain for Ole Miss, and less than 400 remain for Florida, Freet said. Any single-game tickets not purchased by Razorback Foundation members will go on sale Thursday.

The Hogs' home schedule also features the season opener against Louisiana Tech on Sept. 3, against Texas State on Sept. 17 and against Alcorn State at War Memorial Stadium in Little Rock on Oct. 1.