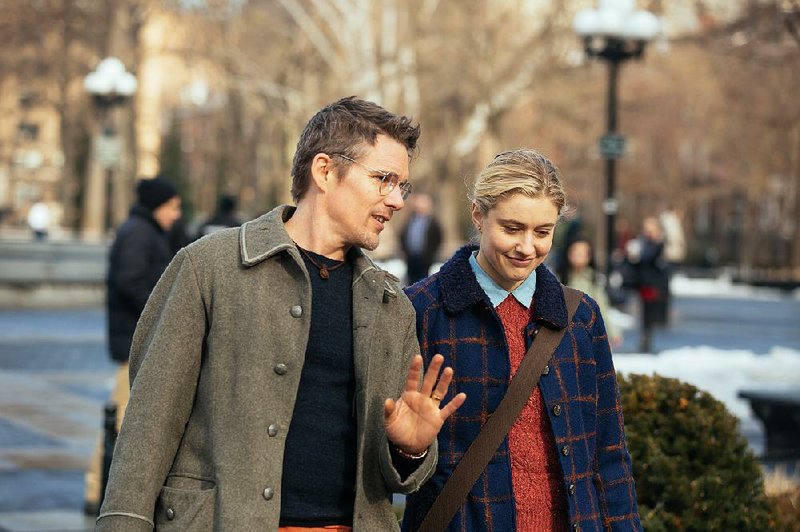 Practical, organized, capable Maggie (Greta Gerwig) knows what she wants: to be a mother. What she doesn’t want, or doesn’t have much success with, is a relationship with a man. So she’s planning on going it alone with the help of a contributing partner. Just when the artificially introduced procedure that substitutes for actual sex is more or less completed, she falls in love with another woman’s husband. And he falls for her.

That’s the vastly simplified opening of Maggie’s Plan, a talky New York-based romantic comedy that echoes the characteristics — self-absorbed intellectuals, stammering, interrupting, cityscapes, cynicism — of Woody Allen’s more successful comedies set in the same city. Witty and not afraid to be occasionally awkward, Rebecca Miller’s film zips along at a charming pace before stumbling past a perfectly acceptable stopping point and dragging the whole affair out beyond its ability to entertain.

Just as Allen’s films grow more complicated as they move along, so does Maggie’s Plan. Our heroine, a New School art student career adviser whose sense of style leans toward plaid wool jumpers, thick tights, and clunky shoes, starts rethinking single motherhood when she meets an attractive, somewhat ditzy professor of ficto-critical anthropology (no, you’re not the only one who doesn’t know what that is) named John (Ethan Hawke) who is married, none too happily, to Georgette (Julianne Moore), a tiny, magnificent, fiercely intellectual theorist with an indescribably odd Northern European accent. They’re the parents of two children (Mina Sundwall and Jackson Frazer).

Maggie manages to come between them. The marriage breaks up. Maggie and John marry. A few years (and an adorable daughter) later, Maggie wearies of John’s narcissism, his constant interaction with his needy former wife, and his relying on Maggie to handle the details of their lives while he dabbles at finishing an overworked novel. “Am I so capable that I don’t deserve attention?” she wonders. Apparently so — she realizes that marrying John was a mistake. He’d be better off with brutally self-centered Georgette, she decides, as that will force him to stop paying so much attention to himself. And she sets about making that happen.

This may appear to be giving away too much of the plot, but trust me, this is just the bare bones of what’s going on here.

The bonding agents throughout are the comic performances by not only goofy Gerwig and Hawke (who’s terrific at playing an absolute jerk) but also by Bill Hader as Maggie’s confidante and former boyfriend and Maya Rudolph as his dryly sarcastic and hugely funny wife. Details matter, such as Georgette’s wardrobe of furry tunic-length sweaters and a severe bun hairstyle that announces she’s a formidable woman who lives surrounded by a chilly Scandinavian modern decor that mirrors her personality and sends her children to a Danish school where they learn to discuss the oddities of adults with each other in that language.

Because of these characters and the world they inhabit, much of this film works. But too much of it doesn’t. If only Miller had resisted the urge to tie up all the loose ends in the final scenes, she might have a hit on her hands.