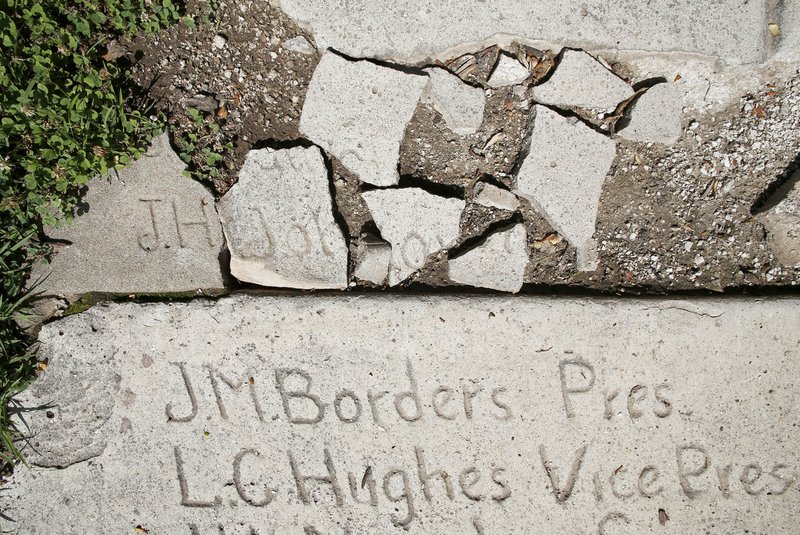 Names from the University of Arkansas graduating class of 1907 and 1906 on the Senior Walk Monday, June 13, 2016, located on the east side of Old Main on the campus in Fayetteville.

The chancellor of the University of Arkansas at Fayetteville is committed to finding a solution for the crumbling historic sidewalk that leads from the front door of Old Main east toward Arkansas Avenue.

But that solution will depend on funding, said Laura Jacobs, associate vice chancellor and chief of staff for Chancellor Joseph Steinmetz.

Jacobs said fundraising efforts need to be implemented before any work begins to repair or replace the oldest section of Senior Walk, the 5 miles of campus sidewalks engraved with the names of more than 170,000 seniors or graduates since 1876.

The oldest part of Senior Walk -- about 1 percent of it, roughly 300 feet -- has cracked into pieces. The section in need of repair or replacement contains the names of seniors in the classes from 1876 through 1924, some of which were inscribed by hand in wet cement in the early 20th century.

The 1876-1924 section includes the names of some well-known Arkansans, such as J. William Fulbright in 1924, before he became a U.S. senator, and Robert A. Leflar in 1922. Leflar later became the dean of the UA law school.

Jacobs said the university might be able to secure grants for the work. A $700,000 grant from the Arkansas Natural and Cultural Resources Council is helping to pay for the $900,000 restoration of the 1875 entryway to Old Main, which is the oldest building on the Fayetteville campus.

"We'd like to gather a group of stakeholders to help guide the process and fundraising efforts," Jacobs said via email after the meeting. "Solution costs vary, and we have the ability to make some repairs -- but how enduring or enhanced the solution is will be determined as funds are available."

Replacing the 1876-1924 section with a granite sidewalk containing the sandblasted names would cost about $500,000, said Jay Huneycutt, UA director of planning and design. He said granite will last three or four times longer than concrete -- at least a couple hundred years.

Replacing that section of sidewalk with sandblasted concrete would cost about half as much, he said.

Other options include trying to replicate the handwritten names in new concrete or replacing only the most damaged sections within the 1876-1924 part.

But Huneycutt said replacing only sections would leave a patchwork of different types of sidewalk materials varying from one year's class to the next. Meanwhile, the old sections that are left alone would continue to decay, he said.