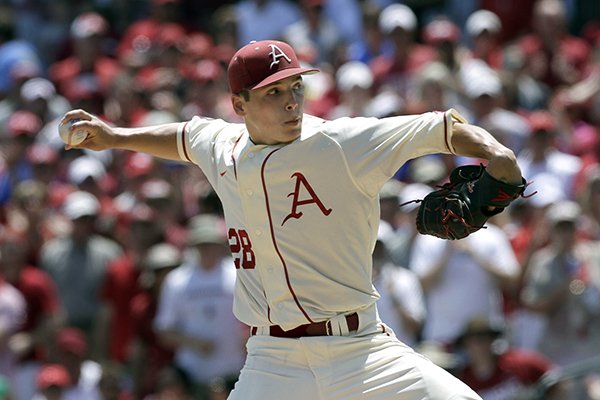 FAYETTEVILLE — Arkansas pitcher James Teague has signed with the Baltimore Orioles and will forego his final season of eligibility with the Razorbacks.

Teague, who was drafted in the 37th round by the Orioles, was a three-year pitcher for the Razorbacks. Teague signed with the Orioles on Sunday, but the signing has yet to be officially announced by the franchise.

"The terms were going to be about the same in the 37th round as the 15th round," Teague said. "I had a pretty good feel that if I was drafted, I was going to go (pro)."

He developed a stress reaction in his throwing elbow during the super regional that caused him to miss the College World Series. He continued to have arm soreness this year, causing him to miss playing time at the start of his junior season.

Teague finished the season with a 6.82 ERA in 18 appearances, 17 of which were in relief. His command was an issue as he recorded 20 walks, six wild pitches and a team-high seven hit batters.

Teague said the decision to leave Arkansas is bittersweet.

"We've been everywhere," Teague said. "We have the best fans, best park, best everything. It's tough to leave a place like that whether you've had a lot of success or not. I really enjoyed it."