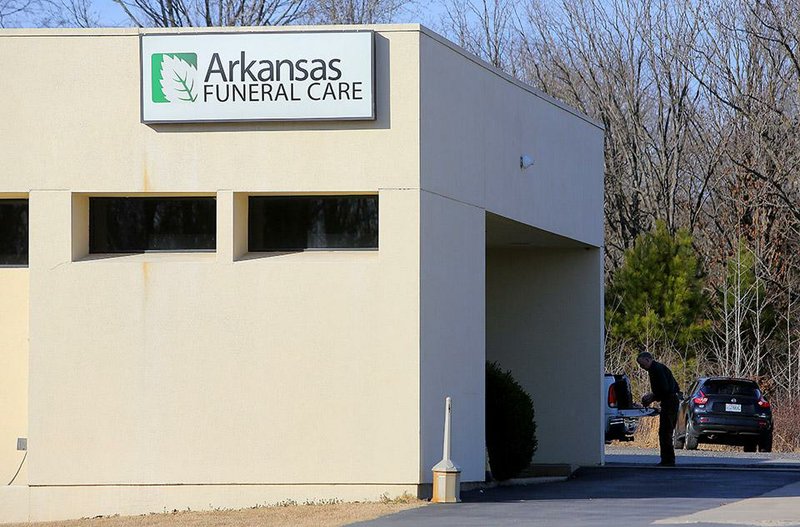 1/21/2015 Arkansas Democrat-Gazette/STEPHEN B. THORNTON A man loads something into a truck behind Arkansas Funeral Care at 2620 West Main Street in Jacksonville, Wednesday.

Pulaski County Circuit Judge Chris Piazza on Tuesday rejected a former funeral home manager's challenges to the legality of the state's corpse-abuse law and cleared the way for prosecutors to use evidence obtained from the inspection of the Jacksonville mortuary where rotting human remains were found last year.

Edward Snow, 63, of Cabot is scheduled to stand trial in two weeks on 13 counts of abuse of a corpse, each charge carrying up to six years in prison.

Snow is accused of criminally mishandling the bodies of 13 people whose families had hired Arkansas Funeral Care of Jacksonville, where he was manager, for burial services.

A January 2015 inspection by the state board that regulates funeral homes found a backlog of bodies waiting to be cremated or buried at the now-closed funeral provider. The findings led regulators that same month to order Funeral Care closed and fined $10,000.

Inspectors reported that the cooler used to preserve remains before embalming was filled to capacity, causing workers to stack bodies around the Main Street facility. Some of the unrefrigerated bodies were leaking fluids from decomposition.

Authorities removed 31 bodies from the facility.

Funeral Care's owner, LeRoy Wood, 87, voluntarily gave up his funeral director license along with the facility's operating and crematory licensing.

He and his son, Rodney Jarrett Wood, 62, were also criminally charged with Snow, who had overseen the home's day-to-day operations.

But the Woods reached an arrangement with prosecutors that allowed the charges against them to be dropped. In exchange their company pleaded guilty to five corpse-abuse counts, and Funeral Care last month was fined $50,000 -- $10,000 per criminal infraction.

On Tuesday, Snow's attorney, Marjorie Rogers, attacked the corpse-abuse law, Arkansas Code 5-60-101, as unconstitutional. She questioned how provisions that criminalize physically mistreating or concealing a corpse could be applied to Snow.

She told the judge that prosecutors have not provided any evidence showing that Snow mistreated or hid bodies. The way prosecutors are attempting to apply the law, anyone who commits murder also would be guilty of corpse abuse if their victims' bodies suffer any decomposition, Rogers told the judge.

"They're criminalizing decomposition," which is beyond what lawmakers intended when they created the law, Rogers said.

The legal standard to decide if mistreatment or concealment of a corpse is a criminal act is a finding that the abuse was "in a manner offensive to a person of reasonable sensibilities." Rogers said that standard also is unconstitutionally vague because it does not specifically describe what constitutes illegal action.

But the judge rebuffed the defense argument after deputy prosecutor Tonia Acker told him that the Arkansas Supreme Court already has rejected the same claims against the abuse law in a 1995 decision in which the high court found that the law was clearly drafted using commonly understood terms.

Piazza also denied defense arguments that evidence collected during the inspection should not be allowed at trial.

Rogers argued that Jacksonville police had used the inspector, Leslie Stokes, as a police agent and used her regulatory authority to seize materials that police otherwise would have needed a warrant to acquire. Stokes was an investigator for the State Board of Embalmers and Funeral Directors, the licensing agency.

The judge rejected that accusation after hearing testimony from Stokes and Jacksonville detective Cindy Harbour. Harbour told the judge that police did not hear from Stokes until the inspector mostly had concluded her review of the facility and had approached police to ask whether the treatment of human remains at Funeral Care could be considered a criminal act.

Harbour testified that police never received a complaint about the facility from any of the families who had hired the funeral provider, but police initiated an investigation in response to the news media's "commotion" over the Funeral Care situation.

Stokes told the judge that she never received any direction from police because her inspection began before authorities knew what was happening at Arkansas Funeral Care.