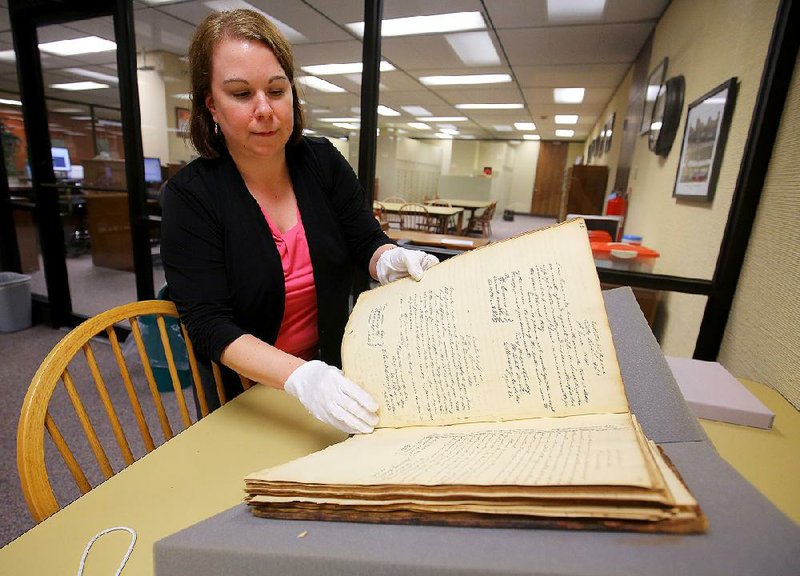 Danyelle McNeill, a digital archivist with the state archives, carefully opens a state auditor’s journal dating back to 1836. The journal was donated to the archives by Philip Palmer of Maumelle.

Arkansas celebrated its 180th anniversary of its entry into the union Tuesday with a special gift to the state archives -- the donation of a lost Arkansas state auditor's journal. 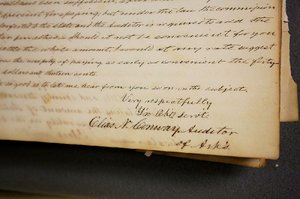 Photo by Stephen B. Thornton
A journal dating back to 1836 that includes the signature of Arkansas’ first auditor, Elias Nelson Conway, was rescued from a Benton “junk store” in 2013 and has been donated to the state archives. Conway went on to become Arkansas’ fifth governor.

The journal is a record of the first year of Arkansas' statehood and beyond, according to Lisa Speer, the state archives' state historian and director.

"We don't really have anything just like that in our collection," she said.

Speer said the journal offers a fairly comprehensive look at life in early Arkansas, containing records of the state's finances, correspondences between state officials and other notes on early Arkansas history, including railroad development during the California Gold Rush.

Philip Palmer of Maumelle, the journal's donor, said he decided to give the book to the archives as a birthday present to the state.

"I love Arkansas, and it was such an original piece of Arkansas' history, I had to see it shared with the historians who study it," he said.

Palmer said he found the journal in a junk shop in Benton and immediately recognized its value.

"I knew there was a big gap of information missing from the archives on the state's finances," said Palmer, who is retired from AT&T and described himself as a history buff. "It's such an important historical piece, I nearly dropped it when I found it."

Palmer initially kept the book in hopes of transferring its contents to a digital format and making the journal's information accessible to those who were interested in the state's history.

When he couldn't get funding for the project, Palmer said, he decided to lend the journal to the state archives, with the intention of the loan becoming a permanent donation.

"It really is a piece of state property anyway," he said. "I really was just returning it to them. It's a piece of history written by state officials."

Palmer said he was happy to return the journal to the archives and into safe hands.

"It's appropriate it ended up at the archives," he said. "They are very well-suited to care for it and preserve it. There's no place it could go but there."

The return of the journal came at just the right moment, Speer said.

"Mr. Palmer knew there were significant names [in the journal] and knew it needed to be preserved," she said. "For him to bring it to the state archives shows tremendous love and appreciation for the preservation of Arkansas' history. I think not everyone would have done that."

Speer said the journal might be displayed at some point on rotation in the archive's exhibits. Eventually, Speer said, she hopes to see the journal's documents digitized and available to the public and those interested in the state's history.

"It's rare when something that's so significant like this comes back to us," she said. "I think there are a lot of records like this in attics, basements and storage all over the state.

"A day like today is a great opportunity to tell people the archives is here and it's a great place to preserve history."