New president at Tyson ready for spot on team 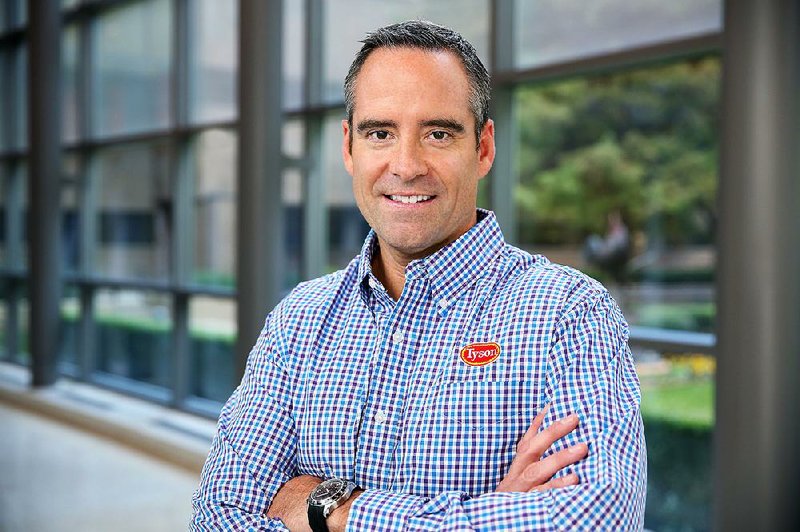 A former Hillshire Brands Co. executive has made his way to Tyson Foods' top ranks more than a year after Tyson's $7.7 billion acquisition of the company.

Tom Hayes, former chief supply chain officer for Hillshire, soon will make the trek from Tyson's Chicago office to Springdale and move into Tyson's executive offices to help steer the company as its new president.

Hayes is now one of the top-ranking executives at Tyson, filling the position that can be a steppingstone to chief executive officer at many companies. He was named president last week. Donnie Smith, Tyson's CEO, formerly held the title of president. Smith remains the company's CEO and is on the board of directors.

"Few people enjoy being told what to do, almost everyone enjoys being part of a high-performance team," Hayes said. "When I think about leading, I am constantly thinking about how I like to be led."

After the purchase of Chicago-based Hillshire, Hayes was at the center of combining the two companies. He said his first role as a Tyson employee was to organize the people who would work on turning two distinct companies into one.

"Knitting the businesses together without damaging our unique advantages was no small task," Hayes said. "Each company, though different, had equal amounts of pride."

Hillshire is playing a major role in Tyson's efforts to refocus the company around branded products instead of commodities, which are volatile and can change the company's bottom line quarter to quarter.

With Hillshire, Tyson inherited some of the most well-known brands -- including Jimmy Dean, Ball Park, Hillshire Farm and Sara Lee -- along with the challenge of integrating a company with about 9,000 employees and $4 billion in sales. Hayes, as a former chief supply chain manager, was tapped to be one of the major players in Tyson's new and growing branded-products sector.

"At Hillshire Brands, I led our operations and supply-chain teams -- so it was a natural fit for me to lead this early on," he said. "Very quickly my attention turned to combining the food-service teams since I was appointed president of our food-service group shortly after we kicked off the integration."

So far, Tyson has reported that the two companies' combination has been profitable. Tyson announced $322 million earned or saved by the Hillshire purchase, for the company's fiscal 2015, according to the latest yearly earnings report.

"When it comes to picking a path that is best for the enterprise, it means that someone has to let go of a way of working that they have held dear," Hayes said. "The good news is that after the decisions are made, we have found tremendous adherence to the new way of working."

By appointing Hayes as president, Tyson split up the role of CEO and president. Alan Ellstrand, chairman of the management department at the University of Arkansas Sam W. Walton College of Business, said companies split power at top levels partially so there is a clear succession plan when the CEO leaves.

"There's a real power vacuum if something happens to that person," he said. "You'd have to dig down pretty far to find their top talent. It's a leap from the executive vice president level up to the c-suite."

About 75 percent of organizations choose CEOs from inside, according to a report by researchers at Stanford University and the Institute of Executive Development, a consultant firm that deals with executive succession. Around half -- 54 percent -- of companies groom specific people to succeed the CEO.

Ellstrand said Hayes' appointment also was a strong symbolic move toward former Hillshire employees, many of whom still work in Chicago while original Tyson workers remain in Arkansas.

"It strengthens the company's top leadership," he said. "It sends a pretty strong signal to Hillshire that the people who worked there are highly valued and are really contributing in the corporate offices."