Canadian thanks bear for deliverance while mushroom hunting in wilderness by MICHAEL E. MILLER THE WASHINGTON POST | June 20, 2016 at 1:00 a.m. 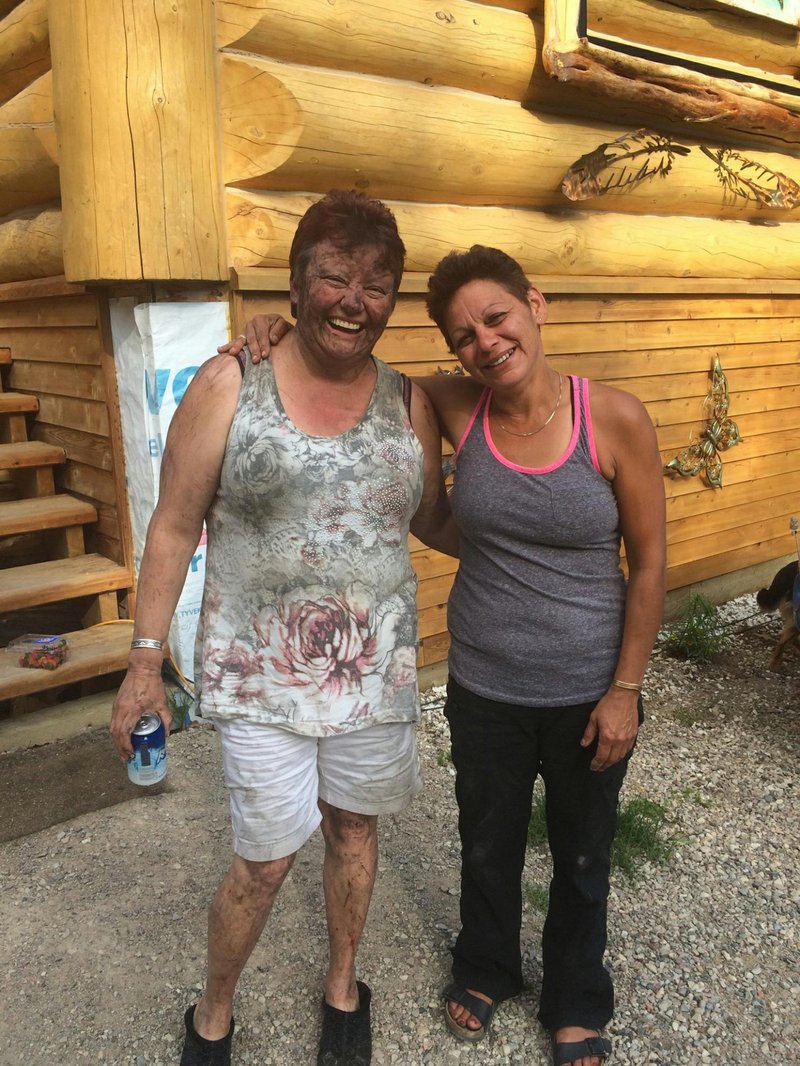 Joanne Barnaby (left) is reunited with fellow morel hunter Tammy Caudron after her hours-long ordeal in the Canadian wilderness.

Joanne Barnaby was deep in the deadfall, smeared in mosquitoes and blood, dehydrated and near exhaustion, when she heard the call of a mama bear searching for its cub.

Twelve hours earlier, she had been picking mushrooms in the remote Canadian wilderness when she had heard a growl behind her. She turned around and saw Joey, her faithful mutt, locked in a snarling standoff with a skinny black wolf.

For 12 hours, the wolf had pursued Barnaby and her dog through the wildfire-scorched forests of the Northwest Territories.

And for 12 hours, the starving animal had tried to separate Barnaby and Joey, driving them deeper into the bush.

Night settled around Barnaby, hiding the swarms of mosquitoes that blanketed her arms, legs and face.

And still the wolf snapped and growled, waiting for the woman or her dog to drop their guard.

Barnaby was near collapse when dawn began to creep across the sky.

That’s when she heard the bear grunt.

And that’s when she got an idea.

It was an idea so outlandish, some critics would later accuse her of making the whole story up.

Yet Canadian officials and close friends confirm Barnaby was missing in the woods.

And she is sticking by her story that an outrageous idea — of pitting one predator against another — saved her life.

Joanne Barnaby knew better than to leave her gun at home.

She had grown up in the Northwest Territories, a huge and rugged region of Canada stretching north of Alberta to the Arctic Ocean. Part Dene Indian, or “mixed blood,” as she would say, Barnaby spent much of her childhood in a residential school, run by the Catholic Church and designed to assimilate Inuits into mainstream Canadian culture.

“They tried to take the Indian out of us,” she told The Washington Post.

When she grew up, Barnaby chose to work with indigenous communities. She often went hunting and hiking through the wildlife-rich forests, always remembering to pack her rifle.

On the morning of June 10, she and a friend, Tammy Caudron, decided to hunt for morels. They climbed into Barnaby’s truck and drove east from Hay River.

Barnaby didn’t want her rifle on her back as she stooped to pick up the pricey mushrooms.

So she left it behind.

Barnaby parked her truck near the highway about 11 a.m. The two foragers set off in different directions. Barnaby had a basket, a can of beer and Joey, her black and yellow mutt.

Joey was Barnaby’s guard dog. When a bear would approach her house in Hay River, Joey would chase it off.

So when, after about five hours of mushroom hunting, Barnaby heard a growl behind, she knew there could be trouble.

She turned around and saw Joey muzzle to muzzle with a black wolf.

The wolf was skinny — probably cast out of its pack, Barnaby thought — but still twice the size of Joey. And it was between her and the highway.

“He looked old to me, but he was smart,” she said. “It took me a while to realize how smart he was, and that he was actually being very, very strategic in trying to separate me from my dog and wear me down. I don’t think he was strong enough to take us both on. And I think he knew that.”

Joey tried to scare away the wolf, as he did with bears, but it didn’t work. The wolf was just watching them, legs spread apart as if ready to pounce, lips curled back to show sharp teeth.

“It scared the hell out of me,” Barnaby said.

The wolf was hunting her. Whenever Barnaby tried to angle back toward the highway and her truck, the animal cut her off. She found herself drifting deeper into the woods.

“He was directing me. There was no question about it. He was pushing me further and further from the highway,” she said. “He was stalking me. He was literally stalking me.”

Tammy Caudron didn’t worry when she got back to the truck. She and Barnaby had a system. Caudron honked the horn, had something to eat and waited.

When Barnaby didn’t emerge from the forest, Caudron decided to go back to picking morels. She returned an hour later with more mushrooms, but there was no Barnaby.

This is not good, she thought.

Caudron walked into the woods, yelling and whistling.

She walked back to the truck and honked the horn.

Now she started to panic.

Caudron flagged down a passing truck. When she told the men inside who was missing, they didn’t seem too concerned.

“Jo knows the bush,” one said.

It was true. Joanne Barnaby knew those woods better than almost anyone. It was nearly impossible that she had gotten lost.

But Caudron worried that her friend had broken a leg or, worst of all, encountered an animal Joey couldn’t scare off.

The men agreed to help. They spread out in the woods, firing their shotguns to alert Barnaby to their location.

Barnaby knew where she was, however. She even heard a few of the gunshots.

But she was powerless to heed them.

As the wolf drove Barnaby and Joey deeper into the woods, the landscape shifted. The relatively flat, burned forest floor gave way to thicker foliage.

Dusk fell and still the animal pursued them. Barnaby had only her now-empty beer can; no food, no water. A cloud of mosquitoes followed her. Even as the wolf watched, Barnaby developed a habit of rubbing her hands over her exposed face, arms and legs.

“My hands were just full of blood and mosquitoes,” she said. So many swarmed her face that “at some points it was hard to see.”

She tried rubbing poplar powder on her skin to keep the insects away, but it did little good.

She was exhausted, hungry and dehydrated. The day had been hot. The night was cold. She was nearing her breaking point.

Then the sky began to brighten in the east, and she heard a grunting sound.

She could barely hear it over the whine of the mosquitoes, but it was there: a sound she recognized well; the call of a mother bear.

“I actually sat down on a log and really concentrated,” she said. “I heard the cub’s response. It was coming from another direction, away from the mother, so obviously the mother was calling her cub.”

The wolf, meanwhile, was watching.

“I sat there and I thought about it and I prayed about it,” Barnaby said. She hit on a seemingly insane plan. She would put herself between the mother bear and her cub in the hope that the mama bear would drive off the wolf.

“I decided I would take a chance,” she said.

Of course, her plan could backfire. The bear could attack her instead.

As she walked toward the cub, she could hear its calls getting louder. Before she ever saw the animal, however, the forest came alive behind her.

“All of a sudden I could hear this crashing behind me and this yelping and growling and howling,” she said. “I just got out of there as fast as I could — from all of them, the cub, the mama bear and wolf.”

For half an hour, Barnaby and Joey made a beeline away from the bears. For once, the wolf didn’t follow.

When she felt they were safe, she paused to rest. But Joey began whimpering, so she let him lead her on through the forest. He took them to a small lake.

The water was muddy and tepid, but it was better than nothing. She filled her empty beer can and drank. Her stomach cramps subsided and she felt some strength return. She then climbed a small hill. In the distance, less than a mile away, she could see cars stopped on the highway.

She descended the hill and headed toward the highway, only to find her path blocked by a vast field of deadfall, or tangled, dead trees.

“I don’t know if you know that game Pick-up Sticks,” she said. “It was kind of like that but on a massive level.”

Barnaby tried to climb through the deadfall. Ten minutes into it, however, she fell and hit her back.

She turned back, away from the search party and salvation.

“It was devastating,” she said. “There were about three points at which I cried. That was definitely one of them.”

“I didn’t think I was going to make it,” she said. “I started talking to both my sons, one of whom died when he was a baby, and my other son, who is a young man now. I was talking to all kinds of people that I love, and I was crying the whole time.”

But she also was walking.

Eventually, Barnaby got to a muskeg, or marsh, with a stream running through it. She filled her beer can again and again.

It took her an hour to cross the marshland. At the other side, there was a wall of willows “so thick I literally had to untangle them.

“When I broke through those willows, I knew I was close.”

After the willows, the forest opened up again. She could tell from the recent burn that she was nearing the highway again.

At 8 a.m., 14 hours after encountering the wolf and four hours after escaping the bears, Barnaby felt pavement beneath her weary feet.

Less than a mile up the road, she could see Royal Canadian Mounted Police cars. She waved at them, but they were busy searching in the other direction.

“I came up behind them,” she said with a laugh. “I surprised them.”

Mounties gave her food and water, but they didn’t have what she was craving most.

“They didn’t have any mosquito spray in that damn truck,” she said. “That’s what I was dying for.”

Barnaby said she was so “pumped up on adrenaline” that she made one final mistake. She turned down a ride back to her house, opting to drive herself instead.

“I just about passed out on the highway from exhaustion,” she said.

She made it, however, pulling into her drive to find Caudron and her family waiting for her.

“I thought you were dead,” Caudron yelled as she hugged her friend.

Barnaby posted her remarkable survival story on Facebook, along with a photo showing her covered in dirt, blood and poplar powder.

“In the hopes that by posting this, I can reduce how many times I will have to tell this story,” her post began.

More than 150 friends and family members commented on it, praising the survival skills and smart thinking that kept her alive. Some even offered jokes.

Some readers questioned her story, however, finding its confluence of wild animals too much to believe.

“The boy who cried wolf is an old parable, but the only morel to this story, is that it comes from the same stuff the mushrooms were growing out of,” one reader wrote.

“This story is more fiction than real,” wrote another. “You have a greater chance of turning into a werewolf under a full moon than you do of being attacked by a wolf.”

But both Barnaby and Caudron insist it really happened.

“We should have planned it out a little better. A lot of things went wrong. But at the end of the day, she did a lot of things right. And that’s why she is here,” Caudron said, adding that she didn’t pay attention to the “few naysayers here and there.”