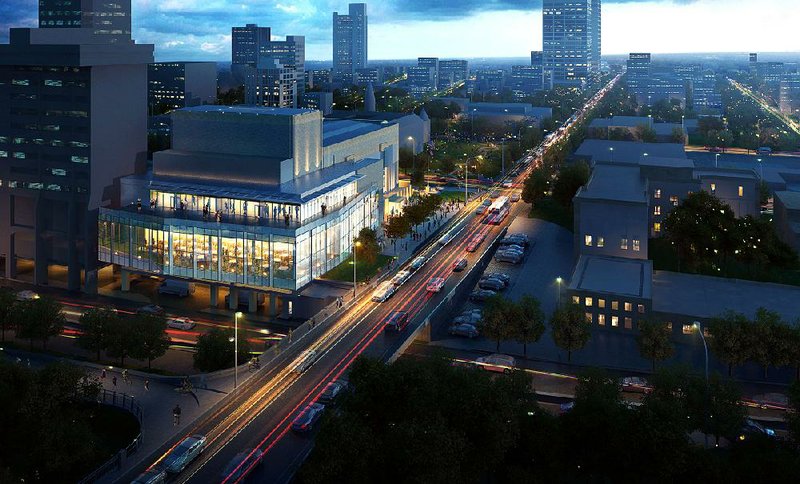 An artist’s rendering shows a view from the north of what the completed Robinson Center will look like when it reopens this fall.

Robinson Center Music Hall is five months from completion, and the interior and exterior construction zones are still in various stages of disarray. 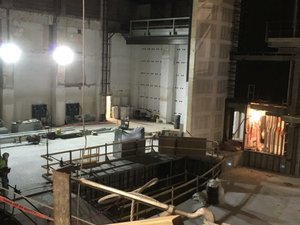 Photo by Eric E. Harrison
This view from one of the side boxes that will be part of the new Robinson Center Music Hall shows the construction continuing on the stage and orchestra pit.

But you can see the end of the tunnel from here.

What was built in the late 1930s at West Markham Street and Broadway as Robinson Auditorium (named for former Arkansas U.S. Sen. Joseph T. Robinson) is getting a completely new interior. Meanwhile, workers are grafting a new conference center onto the building's north and west sides.

At its end of October completion, Little Rock will have a new, acoustically state-of-the-art performance space for concerts, ballets, operas, musicals, dramas and dance recitals. The hall will have two balconies (the lower one grandly named the Grand Tier), an expanded lobby, a full-time (well, Monday-Friday) box office and a three-level grand staircase, along with a new service elevator and a new elevator connecting the parking garage to the lobby.

The conference center will have a 500-seat, divisible-by-three grand ballroom, meeting rooms and a roof terrace, and it will give the building a new aspect that turns its face, and not its backside, toward the Arkansas River.

And the whole building will have a lot more bathrooms.

The $70 million project is on target for completion by Oct. 31, with a month's wiggle room for finishing touches and minor fixes through November.

During the first week of November, the Convention and Visitors Bureau staff will start moving into its new offices, filling storage spaces, putting toilet paper in all those new restrooms and getting the place ready for its grand opening.

The conference center and its new ballroom must be ready by Nov. 12 to host the Arkansas Symphony Orchestra's Opus Ball.

The symphony will also be the first performers in the auditorium with a Nov. 19-20 pair of Masterworks concerts, billed as "Return to Robinson Center." (Music Director Philip Mann has put together a program of showpieces designed to show off to best advantage the hall's new acoustics, especially the finale, Ottorino Respighi's The Pines of Rome.)

Gretchen Hall, the Convention and Visitors Bureau's president and chief executive officer, says she's "very confident" all will be ready on time, absent a few last-minute touch-ups, "repairing nicks and scratches, re-installing a piece of carpet here and there."

The final price tag is a little higher than the original estimated $68.6 million, financed by a bond initiative paid for by repurposing an existing 2 percent Advertising & Promotion tax, the same process the Convention and Visitors Bureau used in 1980 to repay the bonds that built the Statehouse Convention Center.

But it's not because of any major cost overruns, Hall says. The principal "culprit" was adding back a 5,800-square-foot terrace on the rooftop of the new ballroom, overlooking the river and accessible from the building's glass-fronted meeting rooms. (It will also provide a prime view of the demolition and rebuilding of the Broadway Bridge, which was originally planned to coincide with the Robinson renovation but has been delayed until at least later this year.)

The conference center is connected to the catering kitchen at the next-door Doubletree Hotel. The terrace is available for weddings, special events, receptions and "other activities" (the river and bridge in the background make it a great place to take selfies).

The terrace was part of the original plans but removed from the design in 2014, early in the construction process, as a cost-saving measure.

"The funding for the terrace is provided through a combination of owner's contingency funds and cost savings related to construction efficiencies," Hall said in March when the bureau announced that the terrace was back. That will have added approximately $332,000 to the total construction cost. For the most part, she says, "We knew from the get-go that it was an extremely complex project, dealing with historic restoration, and lining up levels of the building with the attached and adjacent hotel.

That's not to say that everything has gone perfectly: "We have had a handful of small surprises -- after all, we're dealing with a historic building," she adds. During the demolition, "we found some columns and pillars that may have been slightly off from what our blueprints showed. So we had to make some slight alterations, nothing that totally blew the budget or that was extremely cost-prohibitive to fix."

Hall says she's pretty sure patrons will be pleased, if not absolutely thrilled, with the new facility.

"We hosted several tours with meeting planners, city leadership, symphony and donors, and received a 'wow' on every tour," she says. "This is much more than a face-lift. People will see that when they come into the new performance hall. They'll see immediately major, major changes."